Thoughts on Joe Thornton's contract extension with the Sharks

Share All sharing options for: Thoughts on Joe Thornton's contract extension with the Sharks

As everyone is aware of by now, Joe Thornton signed a three year $21.0MM extension yesterday, with an average cap hit of $7.0MM per year. The length of his contract falls exactly in line with the payroll plan the Sharks have instituted this offseason, taking Thornton through the 2014-2015 season where he will become an unrestricted free agent.

It's nothing new for the Sharks, but still gives us a good opportunity to discuss the ramifications of this decision going forward in terms of eventually rebuilding vs. annually competing for a Stanley Cup championship: 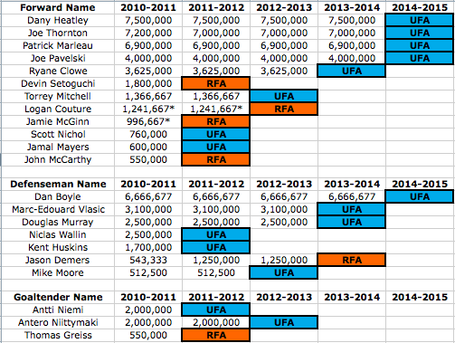 As we can see here, the Sharks have fully committed to their core for the next four seasons-- the organization clearly believes that this group of individuals will be able to provide the necessary production to succeed in the playoffs before their ability declines due to an increasing age.

When the playoffs begin in April 2011, the Sharks five big weapons (Heatley, Thornton, Marleau, Pavelski, Boyle) will average 30.4 years in age. In April 2015 they will average 34.4 years in age. Take the 26 year old Pavelski out of that equation and you come up with a 31.5 and 35.5 split. That's a pretty old core in 2015, especially when one considers the historical trend of players once they reach their thirtieth birthday. Younger players such as Devin Setoguchi, Logan Couture, Jamie McGinn will definitely need to step up their game as the years go by in order to offset whatever decline in production we see from Thornton (et. al) before 2015.

Locking down Thornton like the organization has locked down the other core players whose contracts expire in 2015 sets up a very intriguing situation-- if the plan fails and the Sharks don't capture a Stanley Cup by the start of the 2014-2015 season, it's going to be a helluva thing to see what happens during that year. A lot of it is dependent upon a myriad of factors that are hard to foresee (do prospects begin to push these guys for ice time, does Doug Wilson trade one of the four before then, what free agents are added, how much does the cap increase etc.) as well as one that can't possibly be intelligently discussed yet (are the Sharks competitive and a Stanley Cup contender that year?), but you could see a pretty massive clearinghouse sale at the Deadline where the Sharks just go into rebuild mode and look to the future.

It's something that is actually a really excellent move for the organization if that's the route they take-- all three forwards could command a very good ransom of picks/prospects/roster players even at their age, which could make that hypothetical rebuild go along much quicker than it would otherwise. Dan Boyle probably regresses pretty heavily by that point and brings in a lesser return, but he's still going to have some value to a team that has a good amount of cap space and is looking to make a playoff push.

As for Thornton's actual monetary compensation this year, I think you'd have to be a raging fool not to like the price tag of the deal-- $7.0MM per year is a pretty number for what Thornton is going to give you over the year, as well as setting the tone for the rest of the organization when re-signing from within. It's a great thing to see in a city that has had a lot of difficulty attracting free agents over the years, and allows the Sharks to toss in a little extra money during future negotiations when pursuing free agents.

Thornton's production has been declining since he came to the Sharks in 2005, but the fact remains that he's an all-world talent who will likely continue to hover around a point per game for at least the next two seasons: 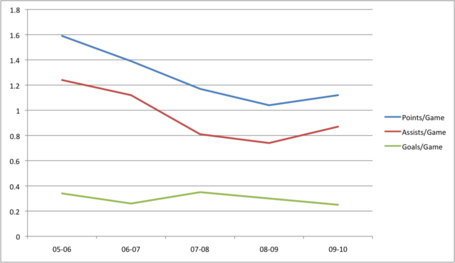 Thornton's points have decreased largely due to his power play production-- as the years have moved on, opposing teams have realized that the Sharks power play essentially runs through Thornton. To combat that they've assigned their best defenseman to shadow him on the power play and try to push him outside as much as possible. At a points per game rate, Thornton put up 0.68 and 0.65 PP/G in 05-06 and 06-07; he has since setted down to 0.45, 0.42, and 0.35 PP/GM in the respective years following.

Since the NHL lockout, Thornton is third in points per game for skaters who have played in at least 200 games. Here are the salaries for three other current players who we are his comparables in the points department over that time span:

The fact that your superstar center takes a pay cut a week after being given the Captaincy (a big bargaining chip, no doubt) is about as big of an endorsement you can give to upper management and the organization as a whole. And when one considers that this was the year when Thornton would be able to cash in on his biggest payday as a free agent for the rest of his career considering he'll be 35 years old when hits the open market again? That speaks volumes.

Kudos to both Thornton and Doug Wilson for getting this done. It's money well spent, and with the extra change, maybe the Sharks can set up a Woolly Mammoth exhibit in HP Pavilion to show their appreciation to Jumbo Joe.