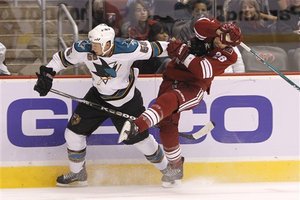 The 25 year old Mike Moore is a 6'1, 200 lb shutdown defensemen. Now, you probably tripped over that line as I did. Although Moore does boast the strong positional play and physicality needed from a shutdown defensemen, he's no where near the size expected of a player looking to fulfil that type of role.

Moore has promise, though, and the organization rewarded that progress with a contract extension mid year last year. And as additional evidence that the team has confidence in him, they just released Andreas Lilja from the roster. Although we thought he had to be bigger to make the team out of camp, and there's room for improvement in the skating department, he's on the team for now. Whether or not he sticks when the team comes back from Europe remains to be seen. We'd rather see him in Worcester, battling with Joslin and Petrecki all season to earn a chance at NHL minutes. For now though, it appears some time in the press box is in his future. 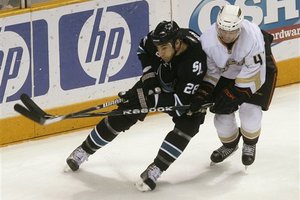 Jay Leach came to the Sharks last year in a time of turmoil; injuries had ravaged a defense which was already thin to begin withand the cap situation made it near impossible to add a player with any real NHL acumen. So credit Doug Wilson for picking Jay Leach off the scrap heap on the cheap. Leach played admirably, dressing in 28 regular season games and earning a +3 rating with the team.

Leach was resigned this offseason at a very reasonable $500,000 contract. However, he has always been an expendable piece of the roster. Leach, a lumbering defenseman with little to no offensive ability, was never going to see considerable minutes anyways; he was going to be the team's way of carrying a scratched defensemen without having to take playing time away from one of the young kids.

With Moore now earning the spot, it's going to be very tough for Leach to crack the roster. However, if there is an injury sometime during the season, expect Leach to be looked to for sound defensive minutes if the kids (Moore, Petrecki, Joslin) still aren't ready. 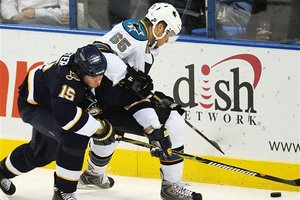 The Sharks are awash with defensemen who have potential. However, most of these players have some type of resounding flaw that has kept them out of the NHL. Derek Joslin's flaw? He's too well rounded.

Perhaps if Joslin were more of an offensive dynamo (a-la Jason Demers), he would have found himself a spot on the NHL roster by now. Perhaps if he was less prone to mistakes defensively, he could have been a bottom pairing shut down option. Truth is, Joslin doesn't stand out enough in any one area to be noticed. Add in the fact that he was injured for the majority of the preseason, and it's not a recipe for success.

Now, before you go giving up on Joslin, remember that he's just 23. He also has a cannon from the point, a nice, low shot which he controls well. He has potential, and he could easily find himself on the NHL team at some point next year. If he has an AHL season like he did in 2008-2009 (scoring 11 goals in 63 games) he could make himself attractive to the big club, especially if offensive production from the blueline is poor. Also, with a nick name like "Jaws", it's impossible to keep him off the roster for long. 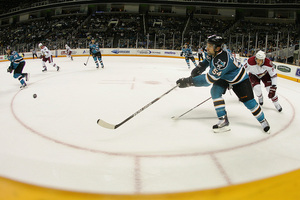 Completing the Sharks trifecta of fringe defensemen is Nick Petrecki. Although he had a disasterous season last year that effectively took him out of the running for an NHL job this year, he's one of the more talented prospects the Sharks have ever had on defense.

The problem is that he's streaky, a direct factor of his talent. Petrecki, in college, was easily one of the stronger players around. Because of this, he got used to some bad habits and is now prone to making mistakes against stronger competition. He still excels when he plays against people who are below him skill wise, but he's yet to adjust to the rigors and expectations of professional hockey.

Petrecki will be an NHL defensemen at some point in his career, and probably a very good one. For now, though, he needs more time to get his head straight and learn what it takes to succeed when he's not the best player on the ice. He's working on these things, and if he puts it together, he could be a real surprise for San Jose. Doug Wilson spoke highly of Petrecki before camp, and if he has a good season in the AHL, we'd assume that he'd get a look from San Jose later in the season as a call-up.