It's hard to really knock Torrey Mitchell for his inability to live up to expectations. After winning the "Sharks Rookie of the Year" award, fans thought he was the greatest thing since shattered bread. I mean sliced bread. Shattered is what his leg was after a preseason injury.

The injury really sidetracked what we all thought was a promising player. He wasn't going to score 30 goals, but his mix of blazing speed and sound defensive ability from the forward position was enough to make you forget about Marcel Goc. The leg injury really affected him going forward, and we saw a player struggle to adjust to his new lack of speed that had defined his career.

Mitchell, however, looked much better as the 2009-2010 season wore on and has been very impressive in the preaseason. Although he's not skating as well as he once did, he's still a far superior skater than most, and can use that to his advantage. In addition, it appears as if he found some real chemistry with his potential linemates Jamie McGinn and Logan Couture. If that line sticks together, it could pay dividends for all three players.

Don't expect Mitchell to eclipse 30 points, but if he can come in and show that he's finally recovered, he could be a real surprise for the Sharks.

Whoever expected Scott Nichol to lead the league in face off percentage please stand up. Now that you're all sitting down, we'd like to apologize to Mr. Nichol for doubting him so heavily when he was brought aboard.

As much as the big guys are the heart and soul of the top six forward group, Nichol is really the pulse of the bottom six. He hits hard, he skates hard and he plays hard. That's not to say he does any of those things particularly well; if he did he'd be earning much more than $750,000 on a one year deal. But he does bring a fire that's needed for this team's success.

Nichol is going to log heavy minutes on the penalty kill, and he's going to take defensive zone draws. That's what he does. Don't expect a ton of offense, but he'll chip in a few here or there, and that's all we expect of him. 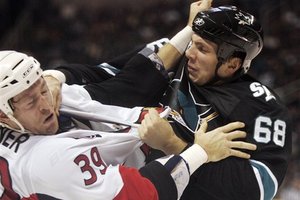 In the recent history of San Jose Sharks enforcers, a prevalent theme has always been that of being able to provide something other than throwing the mitts and making people's faces hurt-- Brad Staubitz was as familiar with the penalty box as Fear The Fin readers were with shouting expletives when he took a dumb penalty in the offensive zone, and Jody Shelley's appeal as a fan favorite was always overshadowed by his lack of scoring ability and mediocre defensive play.

Enter Frazer McLaren. While not a dynamo in any sense of the word, McLaren has the potential to be one of the most well-rounded troglodytes to hit the ice with a Sharks uniform in the last three seasons. The 23 year old's offensive ability surpasses that of his former counterparts, with a willingness to park himself in front of the net and use his 6'5 frame to limit the visibility of opposing goaltenders. His brief 23 game history in San Jose also indicates he forgoes the temptation of taking unnecessary penalties, with the small sample size resulting in 2 drawn and 1 taken during 2009-2010.

McLaren's main role will obviously be dropping the gloves. With a 4-3-1 record according to HockeyFights.com (and two of those losses coming against George Parros, one of the best goons in the NHL), as well as 148 PIM's in Worcester during 09-10, he will be well suited for what the coaching staff expects him to do. 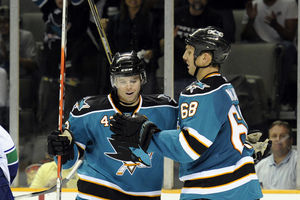 Hereby dubbed "The Red Scare" due to sharing a last name with a notable figure from American history, as well as his ability to light the lamp in the AHL last season (15 G with Worcester), McCarthy was an addition to the Sharks camp that many didn't expect to make the trip to Sweden.

But with two goals in the preseason, and a tireless work ethic, McCarthy apparently turned enough heads to warrant a last look before the Sharks make their final cuts.

Billed as a gritty fourth liner with some scoring touch, McCarthy comprised one-third of the Crazed Rats line last season for Worcester (which included Andrew Desjardins and Dan DaSilva). Those three players were a combined +88 against opposing teams top forwards last year, and McCarthy's ability to log big minutes on the penalty kill as well as handle business in his own zone makes him an attractive option if the Sharks are hit with injuries on the lower lines throughout the season.

Whether or not he makes the roster before the Sharks play Columbus, expect to see McCarthy in San Jose at some point this season. 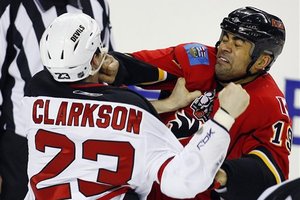 Every offseason one free agent acquisition manages to prove us wrong. Scott Nichol held the honors last season, and in 2010, Mayers fits the bill as a guy who can do so yet again. He's raised a few eyebrows this preseason (his own actually-- pretty sure he has about seven) with his skating ability and tenacity in the corners, traits that eventually put the aforementioned Nichol into the fanbase's good graces.

Mayers advanced statistics from the last three seasons have been questionable to say the least, but one aspect of his game that should receive a lot of attention is his faceoff ability. With the loss of Manny Malhotra to the Vancouver Canucks, San Jose needed a guy to come in and win some draws in the defensive zone. Mayers has the ability to do so in spades, putting up numbers in the 55%+ range during his time in Calgary, Toronto, and St. Louis. That should be a welcome addition to the team and allow Todd McLellan to put him out on the ice for draws before calling him back to the bench when the puck moves up the ice.

Although Mayers has definitely struggled over the last three seasons, he wouldn't be the first player to have a comeback year after joining the Sharks. And we're hoping he does just that. 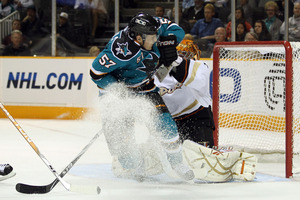 Here at Fear The Fin, we love our Tommy Wingels facts.

For example, Tommy doesn't call his locker a locker. He calls it a cubby.

But what we love more about this kid is his upside. Wingels has impressed a lot of people this preseason with his playmaking ability and attentiveness in the defensive zone, attributes he showcased in a breakout junior season at Miami University of Ohio where he scored 17 goals and 25 assists in 44 games. Although the Redhawks couldn't avenge their heartbreaking loss to Boston University in 2009's National Championship game, Wingels played a big part in their second straight Frozen Four experience where they lost to eventual champions Boston College.

Wingels is about as complete as first year pro's come, due in large part to his three seasons at the college level. Sharks General Manager Doug Wilson loves to look for college players to make the jump into the pros out of their first camp, and like Benn Ferriero last season, Wingels has proved that he has what it takes to play his way onto the NHL roster. It's still uncertain whether or not he'll start the year in San Jose or be sent down to Worcester for some seasoning, but don't let a potential demotion fool you-- the organization has been high on this kid since August and expect him to contribute.

How soon will he be in San Jose? As soon as he gets his permission slip signed.