Perhaps no player was more excited about the Niclas Wallin signing than Kent Huskins. With Wallin and his ridiculous contract now drawing the majority of the fans ire, Huskins can do what he's always done: play solid, bottom pairing minutes as a puck moving defenseman.

Is Huskins overpaid? Sure. But he's also a pretty decent player in sheltered minutes. His advanced metrics are solid, and he's one of the better puck movers currently on the roster. He's not going to put up the points, but he serves a purpose on the team and is an important piece to the defense.

There are better options out there for the same price. But the reality of the situation is that Kent Huskins is already here, he's healthy and he's not as bad as he's made out to be. Maybe that's all glass half full talk, but it's the beginning of the season dammit. Just let Huskins be his mediocre self, and you won't be disappointed. Just remember you're not the one who's (directly) paying his salary. 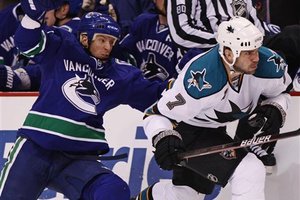 Hamburgers. If you haven't watched that yet, your life isn't complete.

Niclas Wallin has been covered so intently over the course of this offseason that everyone even remotely familiar with Fear The Fin is aware of our opinions on his $2.5MM contract. It was an overpayment to be certain, but once you get past the compensation awarded for his services, it's clear that Wallin offers some value to the team.

Much like Huskins, Wallin will be able to play sheltered minutes and succeed relative to his role on the Sharks. He's a steady defensive defenseman who won't provide a lick of offensive ability, but has a decent first pass and knows when to just play it safe and chip the puck out of the defensive zone. He's not going to stand out every night he's on the ice, but for a player who will be asked to break fill in the gaps when Boyle and Vlasic aren't on the ice, that's not a bad thing-- toss in his penalty killing ability and you have a player who will contribute. He struggled with injury rehabilitation this offseason, but Doug Wilson has assured that he will be ready for the season opener in his home country of Sweden.

The big question surrounding Wallin this year will be whether or not he can elevate his game to log top-four minutes. Recent history says it's unlikely he does so, but there's always the possibility he comes out of the gates playing the best hockey of his life.

You can always hope right? Because we are. 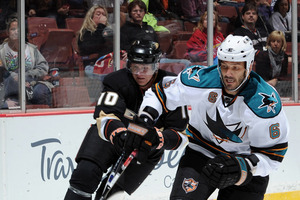 Andreas Lilja was released by the San Jose Sharks earlier today and will not be on the roster. Best of luck to him as he tries to find another NHL job.

And best of luck to that lady above Perry in what looks like a neverending quest to find some spare change lodged in her nostrils.