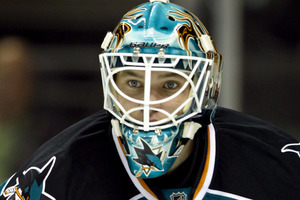 When Antti Niemi was brought in to the San Jose Sharks organization, it wasn't so he could sit on the bench. Although he's going to split starts with Antero Niittymaki to start the season, Doug Wilson likely sees Niemi as the starter, and a Stanley Cup winner at that.

How much he deserved that Cup is up for debate, but it's hard to argue that he stepped it up when his team needed him to against the Sharks in the Western Conference Finals. If he hangs around a .910 save percentage like he did last year the Sharks will still be a Western Conference top seed. However, it's been suggested (about a million times) that Niemi's numbers and wins were a direct result of the defense in front of him. That defense was much better than the defense he'll be behind this year.

On the plus side, it wasn't all luck... Niemi does have some skill. He's huge in net, and he gets down to the pads faster than many of the other hefty netminders. He takes up space. Problem is, he has trouble holding on to what hits him, and generates a copious amount of rebounds. With the blueline currently in place, that's an issue.

Although we'd love to give Niemi the benefit of the doubt, he's looked pretty awful so far this preseason. We'll see what happens when the games start to matter, but at this point we're hoping he proves everyone wrong. 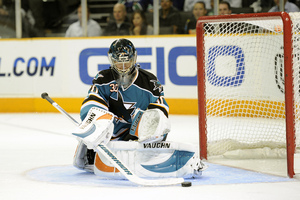 Once the Sharks let Evgeni Nabokov leave for free agency, it was clear that the next goaltender they picked up wouldn't be logging 70+ games and dictating starts. A new age of competition between the pipes was born, and for Antero Niittymaki, that's nothing out of the ordinary-- he's never been the clear cut number one anywhere he's played, with a career high of 46 starts in both 2006-2007 and 2009-2010.

On July 1st San Jose went out and got Niittymaki early in the morning, citing his play during the 2006 Olympics as the point where they realized he would be a good fit for the Sharks. With an even strength SV% that has been trending upwards during the last few seasons. He'll be much more aggressive when channeling shooters than Niemi this season, and relies on his positioning and reflexes to stop pucks.

Of course there's the inconsistency, a hallmark of Niittymaki's career. He'll have a week where he's absolutely unstoppable followed by one where he's unhelpable. In essence he's a perfect guy for a tandem, something that the Sharks have planned on ever since July 1st.

The big question with Niittymaki and Niemi will be their ability to replicate Nabokov's 2009-2010 season in front of a defensive unit without the services of Rob Blake. If they can improve on their seasons last year the Sharks will be fine.

If not? Then expect to see a couple 6-5 slobberknockers all the way til' April. 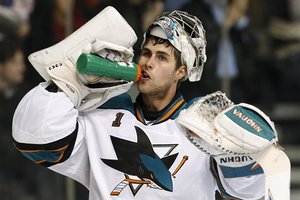 The Antti Niemi signing sent ripples throughout the Sharks' goaltending organization. Antero Niittymaki got the starters job ripped away from him. At least he's in the NHL. Thomas Greiss got moved off the San Jose Sharks roster, and instead will either be in Worcester or another city to begin the year.

Greiss is ready to play in the NHL. He's been ready for years. The 2009-2010 season represented his second season with NHL experience, and he's proved that he's a capable starter over his time in the AHL. Now, though, it looks like he's going to have to prove that all over again.

Yes, Greiss is a crazy headache in net. He takes risk and makes you nervous. But his numbers are good. His reputation is good. He's an NHL player. Just not on this team.

We'd assume that Greiss has been shopped around a bit, but with Tyson Sexsmith (the current Worcester backup) being moved to Stockton, it's likely that Doug Wilson has decided to have his goalies split starts in Worcester too. Sorry Stalock. 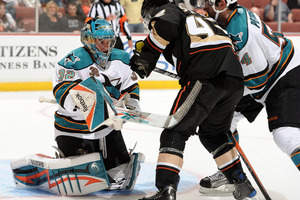 Al Stalock is another casualty of the Antti Niemi signing, because without it, Stalock would have once again gotten the starts in Worcester. With Thomas Greiss now in the AHL, Stalock won't get near the playing time he would have before.

Who knows if Greiss will stay in Worcester all year. He's a trade or a an injury away from an NHL job. If any of those things happen, Stalock is back as the de facto number one.

He's had some injuries in the past, so maybe fewer starts will be good for him. He has the skill, and he's just 23. He'll get his chance, but because of all the factors working against him this year, it doesn't look like that chance will come any time soon.