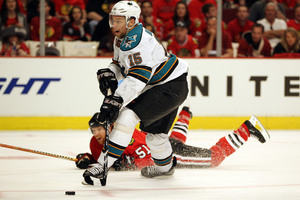 When you think of premier goal scorers throughout the NHL, it's safe to say Dany Heatley will make any top ten list worth reading. He's scored 39 or more goals since the lockout in 2005, and will be poised to do so again this season. Last year with San Jose he posted his lowest shooting percentage total in that time frame (13.9%), indicating that a healthy season could return even higher dividends for the 29 year old sniper.

What Heatley has in scoring ability (and trust us, he has it in spades), he also has in the playmaking department. Throughout his career his ability to find the open man has been overlooked due to his high goal totals, but rest assured that Heatley will contribute enough assists to put him north of 80 points on the season.

However, Heatley's defensive prowess can be lacking at times. He's been caught drifting defensively more than we'd like, and needs to improve in this area in order to round out his game.

Expect Heatley to be the leading goal-scorer this season for the Sharks, no matter where he's playing in the lineup. His booming slap shot and precision wrister makes him the most dangerous shooter the Sharks have entering into the 2010-2011 season, and he will be counted on to come up with big goals at crucial moments in the game. 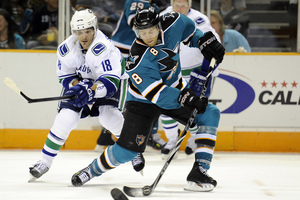 Pavelski has become a cult hero in San Jose, beginning in 2008 when he scored an overtime game-winner against the Dallas Stars in game five to extend the series. He followed up on that performance with an excellent 2010 postseason, where big goal after big goal helped the Sharks advance past Colorado and Detroit in their first two series.

Expecting Pavelski to continue that production in 2010-2011 is probably a bit of a stretch-- as we saw earlier, he vastly outperformed his career shooting percentage during the playoffs, which led to some pretty high totals.

This isn't to say Pavelski isn't ready for the big time. The kid has already gotten there. But expecting 80 points plus from the Sharks up and coming center is probably out of the question, especially if he sticks with Clowe and Mitchell on the third line.

What you can expect from Pavelski is what he has given the Sharks the last two seasons-- roughly sixty points, great work ethic, and solid defensive numbers. He'll log some huge PK numbers once again this season, and will be counted on to be one of the Sharks shutdown guys on a team that is going to need as much help from their forwards as they can get considering the current blueline situation.

Solid and steady wins the race. Pavelski has won plenty of those in his time, and we expect another solid year from one of the most complete Sharks to hit the ice in 2010. 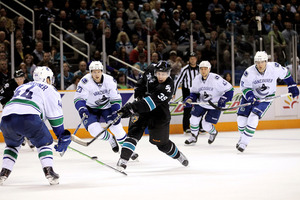 When you write an article about a a player's possible Calder Trophy chances, it's safe to say that you hold said player in pretty high regard. Probably not enough so that you're considering tattooing their face on your person, but the thought has at least run through the ol' noggin.

Couture's emergence at the end of last season eased the pain of losing Manny Malhotra to a lucrative contract offer made by the Canucks. Couture simply makes Malhotra expendable at that price. Although it was originally thought Couture would assume the same role as Malhotra, the Marleau-Couture-Heatley preseason experiment leads us to believe that the organization has as much faith in the rookie forward as we do.

No matter where Couture fits in, he's going to make an impact. He's a firery, never say die type of player who has the skill to back it up. A full season of Couture will pay huge dividends for the team; it's our hope that he stays healthy so that he can realize the fullness of his potential. He's got some room to improve in the skating department, but he's an excellent passer with great vision and hockey sense. He's also a great defensive forward, and should see his PK minutes increase as the season wears on. He's had a wonderful preseason, and should continue to improve all year long. 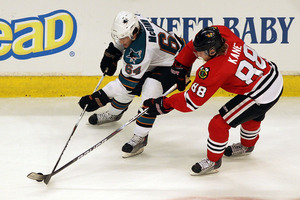 McGinn has always been a player who seems just on the cusp of breaking out and putting up a twenty goal season. This year, he's more than poised to do so.

With news coming out today that McGinn will be playing alongside Joe Thornton to start the season, McGinn will have a great opportunity to feed off one of the NHL's premier playmakers and contribute on the scoresheet. His speed and agility on the rush is a great compliment to Thornton's workmanlike approach to bringing the puck up the ice-- coupled with Devin Setoguchi (who will probably draw more attention compared to McGinn), #64 could fly under the radar to start the year and surprise a lot of people.

With two years of getting used to the system under his belt, and a physical game that has steadily improved over the last two seasons, don't be surprised if McGinn becomes one of the Sharks most important players in providing the scoring depth necessary to win hockey games.