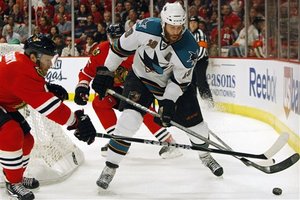 Like it or not, this team lives and dies with Joe Thornton. When he falters, the team falters, and when he succeeds... you get the point.

He can take the team and put them on his burly, shirtless shoulders. Many people assume that Thornton is going to be looked upon more heavily as a leader this season, and we think that's a good thing. A year after his team was ousted in the Western Conference Finals, we think that Jumbo Joe would like to transform himself from goat to hero.

It doesn't hurt that he's in a contract year. Thornton hasn't eclipsed 90 points since the 2007-2008 season, but we feel like he'll do that this year with a pay day on the line.

The Sharks will have to score goals in bunches to remain atop the Western Conference, and it's Joe's responsibility to facilitate that. 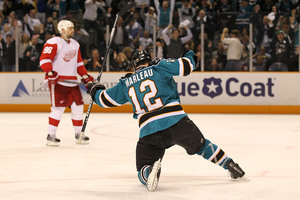 Patrick Marleau may not be the captain anymore, but that may be a good thing. His 44 goals scored last season were a career high, and he was the only player to stay hot into the Chicago series. All of this was done without the "C" on his chest, and it earned him a nice big payday during the offseason.

Marleau probably won't score 44 goals again this year... hell, we're not going to count anything out, but last season will be a hard one to repeat. That being said, he brings so much more to the table than pure goal scoring ability. He's fast, defensively solid and is a gifted playmaker to boot.

We're not sure where Marleau plays next year, be it on a line with Thornton or Pavelski, but we know he'll succeed. He's too good not to. 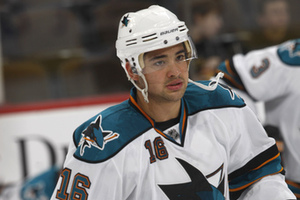 Which Setoguchi are the Sharks going to see this season? It's kind of a cliche saying, but it does apply in this situation. Will the Sharks see another 31 goal season as they did in 2008-2009? Or was the 20 goal season he put together last year more telling?

We're thinking it's the former, as Setoguchi was hurt most of last year and never really got his rhythm back. He was bounced from line to line, something he's struggled with in the past. Although there may be some juggling early on, I'm assuming the team picks a role for Setoguchi and sticks with it.

Like Marleau, we don't know exactly where he fits. If Couture finds himself with Thornton, it's a real battle between Setoguchi and Ryane Clowe to see who earns top six minutes. However, we think Devin will succeed no matter where he's placed.

Many think that Setoguchi can't produce if he's not on Thornton's wing. While Setoguchi definitely benefitted from Thornton's presence, he's not a pure spot up shooter a-la Jonathan Cheechoo. Unlike Cheech, he's quick and has great hands; he can create his own opportunities. If he does that, the future NHL star will be able to put last season behind him. 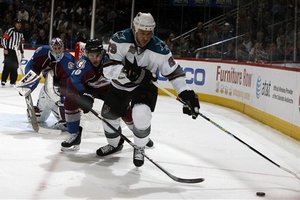 There might not be a player on the San Jose Sharks roster who elicits as much discussion as Ryane Clowe. Billed as a physical power forward who can bull his way to the net, over the last two years Clowe has spent more time floating on the sideboards than Joe Thornton.

At this point in his career, it's hard to expect a Tomas Holmstrom-esque presence from Clowe. The promise of such production is ever present in the minds of Sharks fans, but recent history has indicated that it is nothing but just that-- a promise that probably won't deliver.

However, what Clowe does well has immense value to the team-- he controls the puck along the boards as well as anyone in a Sharks jersey, fending off opposing defenseman and ensuring lengthy zone possession time. During the 2010 postseason it was common to see him cycling the puck for an entire shift, wearing down opposing teams and setting up opportunities for his linemates. Clowe has an underrated set of hands that he showcases in the playmaking game, with a nice wrist shot he can elevate in tight.

He'll be a streaky scorer again this season, putting up three nights in a row with a goal only to disappear the very next week. It's the price you pay with Clowe, but in order for the Sharks to succeed, he'll need to work on being more consistent in his offensive production.