For an organization that doesn't have any trouble drawing at the gate, the addition of pre-game events certainly isn't on the front page of the Sharks to-do list. A few times throughout the year the Sharks will have special events outside of HP Pavilion, but for the most part they let the team's play serve as the focal point of entertainment during their 41 home games.

In general, Fan Appreciation night is held on the last regular season game at HP Pavilion, where an assorted number of items are given away to the first 18,000 fans to enter the buildings. Hats are a popular giveaway at these types of events, but other teams have done things such as shirts, pucks, and posters. It's a good way for the organization to give back to fans and show their appreciation for the extraordinary amount of money they spend on the team via apparel, tickets, and concessions.

However, their lies a great opportunity for the Sharks this season to connect with all of us on a different level. A big part of the reason why we love the team is not just because of the great sport that is hockey, but because of the personalities and emotional connection we feel to the players. When Scott Nichol has a great shift throwing around the body we identify with his blue collar work ethic, and when Niclas Wallin explains that his wife thinks his mustache makes him "look like a porn star" we laugh because it's just plain funny.

In order to capitalize on that, here are a couple suggestions for Sharks Fan Appreciation Night this season. Set up an all-day event before the game (or on an off-day so the players aren't gassed by the end of it) and watch thousands of people flock to HP Pavilion to enjoy in the spectacle.

Is it realistic? Probably not. Would it be amazing? You betcha.

Enter HP Pavilion in late April. The lights are dimmed, colorful posters of the Sharks adorn the walls, and a kooky carnival tune is playing. The mood is tense but fulfilling, the type of moment where you can feel the electricity in the air. As the kids peer around the corner to the main stage, all of a sudden it appears-- Joe Thornton on a mechanical wooly mammoth, beckoning wildly for everyone to come join him for a night filled with grandeur. 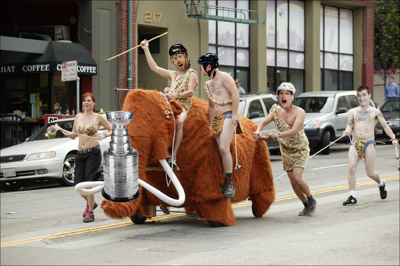 Courtesy of Ivan, from our Halloween Photoshop Expo last season

Imagine the excitement! Re-live ancient history! Joe Thornton, a self-proclaimed "wooly mammoth guy" will be riding a his favorite prehistoric beast clad in a leopard skin garment, as well as giving three seminars throughout the night on the mammoth, it's extinction, and why everyone should be a huge fan of this magnificent animal.

Jumbo Joe is no stranger to doing interviews shirtless, but you've never seen him like this! An action figure of Thornton, which also comes with a wooly mammoth and three types of interchangeable clothing, will also be available for purchase! Get your Fan Appreciation tickets today!

As the kids flock around Thornton, who roars with laughter as Manny The Mammoth lifts up three boys hanging from his tusks, more booths appear. What else is in store on this magical night? 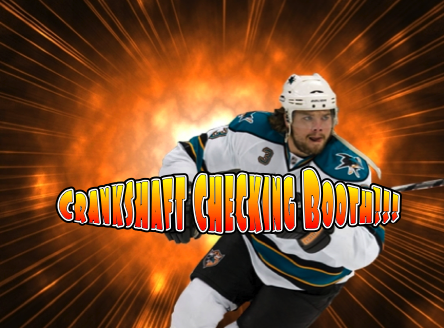 Boom! Kapow! Ever want to know what it feels like to take a run at Douglas Murray only to land up on your keister? Well now you can! Lace up the skates, say five Hail Mary's, and see if you can knock Douglas Murray onto the ice! Fun for the whole family, and a great way to spend your night!

Health insurance required. Not eligible for those under the age of 18. 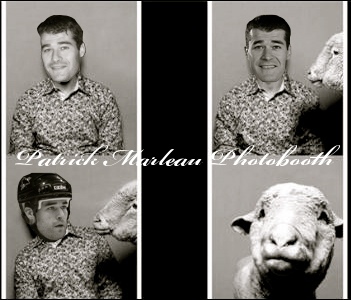 Enjoy a serene night with Patrick Marleau in our photobooth, where four pictures of you and the Sharks goal scorer will be taken. As Kenny G plays on a stage nearby, and the water from our three fountains splashes into the pool harmonizing with the low octaves of Kenny's succulent saxaphone, you will feel relaxed and free of any social anxiety. Even if Marleau himself won't be.

An excellent way to wind down during the night, and get to know the Sharks superstar.

Other events include Niclas Wallin's Hamburger Palace (Ryan Vesce small fries optional), Doug Wilson's tanning salon, Jamal Mayers' "How to make a fashion statement with your eyebrows by dying them blonde!" seminar, playing the famous Hungry Hungry Hippos board game with young center Logan Couture, and much, much more.