In Western Conference, parity is the name of the game

Share All sharing options for: In Western Conference, parity is the name of the game

The 2010-2011 season has been a helluva ride thus far, and with the Sharks set to play their twentieth game of the year on Wednesday against the Chicago Blackhawks, many are left wondering which team will show up. Will it be the squad that shot the lights out in their best game of the season a week ago against Los Angeles in a 6-3 victory, or will it be the team that struggled to get anything going against the Columbus Blue Jackets this weekend?

Couldn't tell ya. And I'm sure everyone from Todd McLellan to Jamal Mayers probably couldn't tell you either.

However, as many here on Fear The Fin have mentioned in the comments over the last few days, the Western Conference is extremely tight right now from top to bottom. Detroit and Los Angeles are looking like the early favorites to come out of the West, but the difference between them and the rest of their adversaries is thinner than the population numbers in Prypiat.

It's something we haven't seen since 2007, when the standings on November 22nd looked pretty similar to the alignment today: 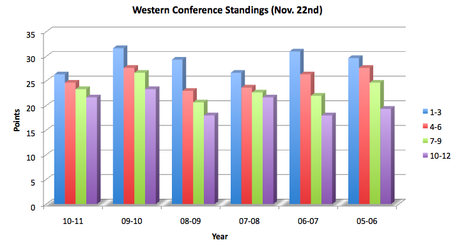 Games played might be a slight factor here, as all of these totals are raw points and not measured on a per game basis. After a recent weekend that saw my significant other establish some rudimentary metrics concerning our love life (ALT, or Average Lovemaking Time) I've developed quite the aversion to anything resembling math or its various subsidiaries.

Not making it through Minus The Bear's "Booyah Achieved" will do that to you, especially when one considers her satisfaction was anything but.

At any rate, there's a few short things I'd like to say on the subject of standings, specifically at the NHL level because seeing how ol' Planker measures up against previous lovers would produce a graph that was less numbers and more just a giant teardrop down in the fifteenth slot. I'm not saying I don't measure up to the average man or anything, I'm just saying that dating me is more about my innate ability to make you laugh during every minute of our time together and you should cherish that. You get what you deserve, and if you're browsing the Craigslist personals at three in the morning on a Tuesday night than maybe you deserve a little better based on the picture I provided, but photoshop is a marketable talent in today's society. With that skill set in my back pocket we're only looking at about a year or two before plastic surgery becomes a very real solution to that growth on my neck you always feel the need to ask about.

With the Western Conference playoff race more vague than the purpose of this article, the question now becomes what does the current alignment mean for San Jose? The team has struggled with consistency all season long and yet remains within striking distance of every spot in the Conference from first to thirteenth. Los Angeles, your current Pacific Division leaders? Four points away, two games where the Sharks get wins and the Kings take two regulation losses into the locker room. Nashville, your current thirteen seed? San Jose continues their mercurial performances, struggles with injuries, and ends up selling at the deadline.

However, I want to make something clear-- this team is too good to miss the playoffs. I know that's a point of contention amongst many in the community, but frankly, the possibility isn't even on my radar. Maybe that makes me short sighted or maybe it makes me a rational human being. I don't know. Bookmark this article and check back with me in late February. If they're still in 11th place then I'll probably be dodging falling skies around every street corner while screaming about Mayan prophecies in my underwear. Give me a dollar, pat me on the head, and walk away with the smug conviction only a successful doomsday prediction can provide.

This isn't to say the Sharks aren't in a tight spot though. It's pretty obvious we're far from it. There are some major issues with the club, and one that only a blockbuster trade may be able to fix. Although the optimist in me says that the point differential is a good thing for San Jose in that they're just a five game stretch away from rolling into the top five, the realist in me sees all of these teams fighting for points and wonders if a five game stretch can even make a sizable dent.

In the post-lockout era of loser points gained via overtime and shootout losses, every team has begun to pick up more points per night than they would have normally. Coupled with the Clutterbuck of teams in the top 13 and it gets even harder to move up the ranks-- a nice five game run from San Jose gets offset by the number of other teams gaining points in that same time frame, meaning instead of leaving opponents in the dust you're slowly gaining ground by inches. Although thinking on a game by game basis is a good thing for the Sharks locker room right now, and is on just about every night in the NHL, a very real standard has to be set where game to game isn't just good enough. Sustained success is the only route the team can take to get back to the place they expect of themselves with twelve other good teams clawing for position.

You have to think big picture first to understand how important the small picture is really going to be.

Since the lockout, the Western Conference eight seed has averaged 93.6 points at the end of the season. The Sharks are on pace for a wild 94.9 this year, which puts them right around make or break territory. In other words, they can't really afford another nineteen game streak like the one they just had, lest they plan on starting what would essentially be their playoff season in about early March.

It's time to get the car into gear. The year isn't "early" anymore.