Talk of a new Summit Series heats up-- should it happen?

Share All sharing options for: Talk of a new Summit Series heats up-- should it happen? 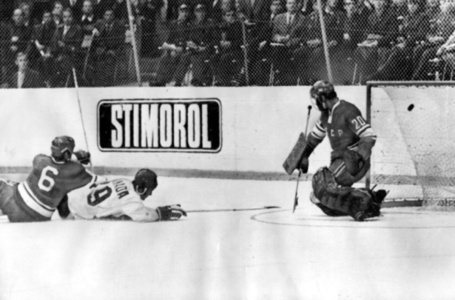 Many Canadians still consider this goal by Paul Henderson to be the most important goal of the last century. Photo courtesy of Toronto Star File.

A question we'll see come up again and again in the next year will be the one raised by an NHL player agent Allan Walsh on Twitter - "Is 40th anniversary Canada Russia Summit Series in 2012 a good idea?"

The reason why is because of last week's report by New York Times indicated that Hockey Canada held preliminary talks with the Russian Ice Hockey Federation for a new Canada-Russia Summit Series to be held in September 2012. The series intends to do two things-- (1) celebrate the 40th anniversary of what is considered by many the greatest hockey tournament of all time, the 1972 Summit Series between Canada and Soviet Union, and (2) write a new chapter the biggest rivalry in international hockey. The Series will likely include eight games (four in Canada and four in Russia), just like the original one-- all played in different cities. The talks are also in line with what we reported here at Fear the Fin two weeks earlier, that the new hockey arena that's being constructed right now in Sochi for 2014 Winter Olympic games is ready to host the Summit Series in 2012.

While I think the best international game of the the recent past was that memorable Canada-USA final at the Winter Olympics in Vancouver, no game at that tournament was more anticipated by hockey fans around the world as was Canada-Russia. Ovechkin, Malkin, Datsyuk, Kovalchuk vs. Crosby, Toews, Niedermayer, besides many other all-stars, including five of our Sharks all on the ice at the same time. However, the game was pretty much over after the first period as a result of a well executed slaughter by the hands of Canadian coach Mike Babcock and his players, which is why I found the Gold medal final to be more interesting (and less painful for me). But there is still no greater rivalry in all of hockey than the one between Canada and Russia. Imagine the same rosters of players on the ice, but repeated eight times within a two or three week period.

That kind of hockey in September on TV or in person would beat the useless NHL preseason hockey games, wouldn't it?

No other teams have seen as much international success as Canada and Russia. No other teams produced as much hockey talent on a consistent basis as these two. No other two nations in the world care as much about the game as do those two.

The report by New York Times does an excellent job covering the history of Summit Series and what followed, and there is no need to rehash it here once more. For additional reading, please refer to this Wiki article.

Since the discussion began, I was asked several times on Twitter (as well as in person) for my thoughts on the idea. I endorse it with both hands for the following three reasons.

But then again, I'm Russian.

No doubt Hockey Canada and Russian Ice Hockey Federation want the new Summit Series to happen. Even IIHF is endorsing the event. The man in charge in Russia is Vladislav Tretiak himself. whose legend was born during that 1972 Summit Series. To this day, Tretiak is as recognizable as Alex Ovechkin when he travels to Canada for business. There is no doubt the fans in both countries will also want the series to happen, as would the players. But not surprisingly, the NHL administration is cold to the idea, with Bill Daly, NHL's deputy commissioner issuing this statement via email:

"We don't think that endorsing a re-creation of a Summit Series utilizing N.H.L. players is appropriate given the current makeup of the N.H.L. We are more international now than we ever have been before and to limit any ‘N.H.L. authorized' or ‘endorsed' series between only two hockey countries would be unfairly exclusionary."

The point made by the league is a fair one - the new Summit Series would complicate another NHL season, and also eliminate the likes of Henrik Zetteberg, Ryan Miller and Marcel Goc from showing off their skills and national pride against the other best players in the game. As pointed by New York Times, the talks are also complicated by the fact that the current collective bargaining agreement between the players and the league is set to expire in September of 2012, and who knows at this point if new agreement will even exist at the time.

I am clearly a bias party here, but since the majority of the FTF readership is neither Canadian, nor Russian, I'd love to hear your opinion on this.

Should the Summit Series between Canada and Russia happen? As an American (or any other nationality), would you be interested in watching it?