If the playoffs started today, San Jose and Chicago wouldn't be involved in the festivities. Instead of the Stanley Cup they would be playing for the Sacko Bowl, Shiva far from sight.

It's a crazy thing to think about.

Granted the Blackhawks are currently in fourth place based on sheer points, but that doesn't tell the full story. Calculating the standings on a points per game basis drops Chicago down to 11th, leaving San Jose and Colorado deadlocked for the 9th seed, out of the playoffs as well. It's a testament to one of the closest Western Conference races in recent history. It's a testament to both teams inconsistency. And it's a testament to the fact that every standings point matters this season.

Detroit has been the class of the West thus far this year, but outside of the omnipresent Winged Wheel, there hasn't been a whole lot of shaking and moving amongst the other twelve seeds currently in serious playoff contention. A mere three points separate the fourth and twelfth seeds as of this posting, with a preposterous amount of clubs boasting 32 points on the year (six).

And despite early season prognosications, both Chicago and San Jose have done little to surpass the average pace of their counterparts this entire season: 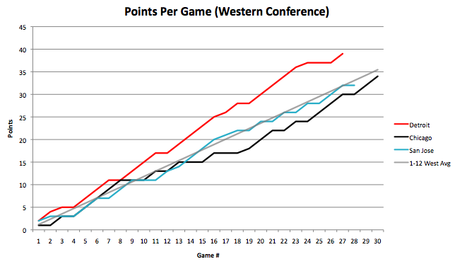 In other words, they've both toed the line between average and below average, making tonight far less about puck possession and notching the majority of scoring chances, and more about picking up two points in whatever fashion possible. In terms of quantity over quality in the West right now, there's no doubt that quantity is king.

The Blackhawks head into HP Pavilion without Marian Hossa or Patrick Kane, two potent offensive weapons that will play a huge role in their quest to turn around their mediocre season. Hossa is expected to begin skating with the Blackhawks when they return from their road trip early next week, and Kane's early prognosis of three weeks on the shelf has received a much more optimistic view from those surrounding the team. San Jose is just beginning to get healthy again on the backend after Niclas Wallin and Jason Demers returned in Detroit, leaving veteran defenseman Kent Huskins and right winger Devin Setoguchi the only two Sharks still on the injured list.

Hossa and Kane's injuries serve as a reminder of just how precariously thin the line is between playoff teams in the West. Injuries of that magnitude, whatever the length of rehabilitation, puts a team at a disadvantage on every single night they're missing from the lineup. As we've seen thus far, each game in December is going to be just as important for this Sharks team than the ones they will play in March-- taking advantage of a depleted Chicago squad is in their best interest tonight. There's no telling what type of burdens they will face in the coming months with respect to injuries to their top players. And with the way things have played out thus far, the prospect of losing a notable defenseman or forward for a three week span is one that could put them in a hole that is hard to come out of.

The first meeting between these two teams last month may have had the feel of those playoff games in May of 2010. Tonight, it has the feel of two teams just looking to get an opportunity to play in April of 2011.