Share All sharing options for: Announcing FTF Night At The Tank Prizes

Let us take you back to a time just one year ago.

Two young men, struggling to piece together any semblance of social respectability, conjured up a meager assortment of prizes for a raffle that may as well never have happened. The "Pauper's Prize Pack" was the night's big ticket item, it of four Saltine Crackers, a handful of expired Lotto tickets, and a Lukas Kaspar rookie card accidentally signed by Rob Davison. It's mediocrity was not lost on the cobblestone streets from which it was inspired.

Today changes all that.

As long as we can delete our web archives that is

As a thank you for all your support throughout the years, we've teamed up with the Sharks Foundation, local businesses, and friends of Fear the Fin to provide you with prize packs worthy of your hard earned money. And we haven't forgotten to give our raffle the humorous, creative twist you've come to expect from us.

So, without further ado... here are your prize packs that will be up for auction at FTF's Night at the Tank on December 27th. Our goal is to raise $1,000 for the Sharks foundation, a mark that should be easily attainable considering how deserving they are of our help. From our thriving community on Fear The Fin to individuals in need within the city of San Jose, we're hoping to help make a difference for those who are not as fortunate as us during this holiday season.

Raffle tickets will be priced as follows, with the exception of the FTF Pack (which is conveniently priced at $1):

* One ticket for $3
* Two tickets for $5
* Four tickets for $10
* Ten tickets for $20
* Your height in tickets for a flat fee of $50. Another option is to get a Paul Bunyan type such as SetoThorMarChooski to buy your tickets for you considering he's about six foot twelve. This is by far our best deal on raffle tickets.

Every single cent from the raffle benefits The Sharks Foundation. Special thanks to Scott Emmert and Jeff Camuir for helping us make this happen. We owe them the world.

The Fear the Fin Pack ($1 Tickets for this Prize Pack!)

Included: The infamous "Robertson" jersey, a subscription to The Fourth Period Magazine, Game Watching/Dinner with Plank and TCY.

We'll start the bidding off with our most lackluster prize-- one that centers around Fear the Fin. A fitting tribute to our work. We could have gotten you dinner with Mike Ricci and a shirtless Joe Thornton, but instead chose to side with our egos. Not eggos, although those are a dinner possibility. Meet us at Safeway around 11 PM with all your credit cards and an economy sized tub of maple syrup. Getting your waffle on is expensive yo. But we gotta indulge.

Winning this prize gets you one non-refundable dinner with Plank and TCY where we will watch an away Sharks game at a location of your choosing (if waffles aren't your thing we're always up for saving money on laxatives and hitting up Mr. Chau's). Also included is a year long subscription to The Fourth Period Magazine (the only respectable publication we'll ever be associated with), as well as the tremendous opportunity to own what is quite possibly the greatest (if not most fragrant) jersey to ever grace the Earth. We might not know who this Robertson character is, but we do know he smelt odd, had a penchant for poorly copying 90's era Sharks sweaters, and will go down as an integral piece of Fear the Fin folklore.

Included: An item signed by Ryane Clowe courtesy of Sports Gallery, a $25 Gift Certificate to La Pinata, and a Sharks 20th Anniversary t-shirt.

Hailing from Newfoundland, Ryane Clowe was born about as far away from Mexico as possible. But we've never backed away from a bad pun, and we sure as hell ain't starting now. Enjoy some great food at La Pinata's new Downtown San Jose location (17 N San Pedro) when things "are starting to get a lot more chippy" at home with the significant other*.

Every great bromance begins with a smile. And we'd like to share this one with you. Feel just like an honorary FTF Staff member when this compilation of prizes from the Sharks' young stars makes you weak at the knees. It's a great head start to a closet shrine. We just can't provide the lock of hair.

The All American Pack

Included: A puck signed by Joe Pavelski, a $30 gift card to Peggy Sue's, and a "Hella" shirt courtesy of Mayberry Workshop.

It's been said that when Joe Pavelski bleeds, he bleeds the multicolored red, white, and blue which coursed through the veins of other American heroes such as Thomas Jefferson, Paul Revere, and "Hacksaw" Jim Duggan. In honor of their unwavering patriotism, we've put together a prize pack worthy of the stars and stripes.

This pack comes with a puck signed by Pavelski, a $30 gift card to Peggy Sue's All American Diner, and a Hella t-shirt from our friends at Mayberry Workshop. That last one isn't as much USA as it is NorCal, but we hella made it work.

Included:  A framed photo signed by Douglas Murray, $25 gift card to Red Robin (Home of Insanely Delicious Hamburgers) signed by Niclas "Hamburgers" Wallin, and a commemorative puck from the NHL Premiere Series in Stockholm signed by both Swedes.

This pack is quite possibly our favorite of the bunch if only because it's the epitome of Fear the Fin. Take a meme, blow it way out of proportion, and stick with it. Hamburgers isn't going anywhere unless the Sharks are on the road. Then the hamburgers are coming to him.

So enjoy your gift card to the home of the world's best gourmet burgers, Red Robin. And while you're there don't forget that you've also got your greasy little hands on some sweet merchandise signed by Douglas Murray too.

There may be better prizes out there, but this Swedish delight gets our vote for all around excellence.

As you can probably tell by now, we're not messing around here. This pack comes with a puck blessed with ink lucky enough to flow from a pen anointed as "The Chosen Sharpie" by the Hockey Gods.  It's a good thing they had one at CVS. We've rooted around in the garbage can for our fair share of sharpies during our lives, and the neighbors are starting to get suspicious.

The big names are all here. Thornton. Marleau. Heatley. Boyle. Rissmille... well, just the first four. Patrick Rissmiller's inclusion would have torn the earth by the very hairs of Thornton's beard by which it was strung together at the beginning of time.

We've also included a gift card and some shirts donated to us by the awesome O'Flaherty's Pub in Downtown San Jose. So go get a healthy buzz and tell the patrons how you wrestled the fabled puck from the jaws of the Kracken and lived to tell the tale.

Included:  A pair of custom fitted MLX Skates, valued at $800, and a large MLX t-shirt.

We've all gone to Play it Again Sports, picked up a pair of dull, beater skates and putzed around the rink for a while. Pretended we were Jamie McGinn, scoring in bunches.

Maybe that was just Plank.

Get closer with a pair of custom fitted skates generously donated by MLX, designed and tested by Mario Lemieux. You might not score like Jamie McGinn does in Plank's dreams, but you may score like McGinn has in 2010-2011.

Skates will be delivered immediately following the event once the winner has provided his/her sizing information to the FTF Staff.

Included:  A pair of center ice tickets donated by Mid-State Electric to see the Sharks play the Oilers January 13th, a $25 gift card to The Brit, and a $20 gift card to The Old Spaghetti Factory.

Ever wonder what it's like to walk around town like a debutant, throwing money at anyone who even gave you a passing glance? Oozing class out of every pore? Monocle shined, top hat fluffed, Gerald the butler setting up dinner reservations with the sexiest starlets in town?

Too bad, because you're only getting $45 dollars. What you do with that, however, is up to you (not really though, because being as they are in the form of gift cards, you have very limited options).

In all seriousness, these are the best seats in the house, generously donated by the awesome people at Mid-State Electric, Inc. You won't find a better place from which to watch the game, and we're giving you the funds to grab a drink and dinner beforehand (or a drink after the game if Niemi is in nets).

Whomever said that white shouldn't be worn after Labor Day must not have had a Dan Boyle away jersey signed by the man himself. Otherwise, that rule would have never been enacted, and we could have rocked our Miami Vice ensemble mid-October in areas outside of our respective bedrooms. Not that our stuffed animal collection ever minds-- those tea parties get crazy, especially when Snuggles puts two cubes of sugar in his Earl Grey. You should his tummy rub dance after a sugar buzz. It's electric.

The Sharks Foundation came through big here, providing this blue chip item. We'd like to thank them for their commitment to the site and the auction.

And without further ado, the Grand Prize. We've teased you for weeks. We've even let you shake the box. But get ready to unwrap what is possibly the greatest Christmas Gift, nay, GREATEST CHRISTMAS MIRACLE of all time. 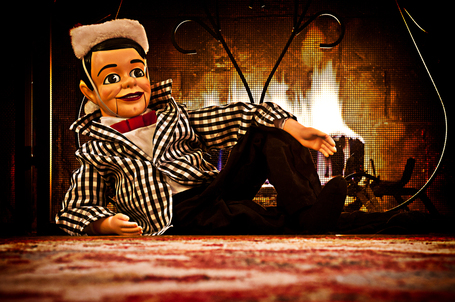 Enough said. Bring your Christmas money on the 27th, because this is about to go down.