Are the Sharks giving away the puck more often this season?

Share All sharing options for: Are the Sharks giving away the puck more often this season?

A common complaint amongst Sharks fans is San Jose's propensity to give away the puck too often. We've seen our fair share of those maladies this season-- breakout passes that don't get up the ice as quickly as expected, botched zone clears, centering the puck in the offensive zone without a clearly intended target, and a lack of puck control in the neutral zone. Stints under former Head Coach Ron Wilson and current Head Coach Todd McLellan have produced the same amount of qualitative observations-- it has seemed to be an organizational issue, not one born of a specific scheme or gameplan that can be isolated to the man behind the bench.

Beginning with Ron Wilson's first season as a full-time Head Coach in 2003-2004, here are the numbers for Sharks giveaways on a per game basis broken down by home and road: 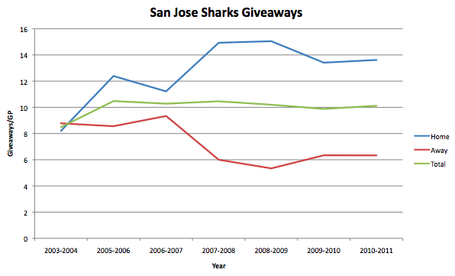 In terms of a coach by coach basis, our preliminary observations seem to be true-- San Jose has given the puck away at nearly the same rate they always have outside of Ron Wilson's first year as Head Coach. There is very little difference between the two coaches in this regard, outside of better puck possession at home under Ron Wilson and better puck possession on the road under Todd McLellan.

However, this isn't to say the Sharks have been especially good at taking care of the puck over the last six seasons. They've been a fairly mediocre team in this regard over the years, with Wilson's final year and all of McLellan's resulting in the Sharks being annually ranked in the bottom third of the league.

Is this the end all be all of San Jose's struggles this season? Not in the slightest-- I would argue that giveaways are a statistic that requires major context, as a giveaway behind the net in the offensive zone is much less dangerous than one that comes in the neutral or defensive zone.

However, this is an issue that the Sharks have historically had trouble with, especially in relation to all other 29 NHL teams over the last four seasons. With Wilson's final season resulting in the Sharks being in the lower third of the League I would argue that San Jose's propensity for giveaways are a result of the roster in place and not any specific coaching strategy that emphasizes lackadaisical puck control.

Either way, it's a frustrating element to the Sharks game. And one that needs to be rectified as we move forward if the Sharks want to establish any form of consistency, consistency that has been severely lacking from their game during the entirety of this season.