The Thick Red Line: Sharks storm back in the third, steal a 5-4 win

Share All sharing options for: The Thick Red Line: Sharks storm back in the third, steal a 5-4 win

After a Logan Couture giveaway in the offensive zone, Mike Richards receives an outlet pass and breaks up the ice. After calmly entering the zone waiting for Danny Briere to get to the front of the net, Richards sends a tumbling wrist shot towards the Sharks net. Although Jason Demers would manage to get a piece of the ensuing shot with his stick, it wasn't enough as the Sharks fell 5-4 to the Flyers in Philadelphia. 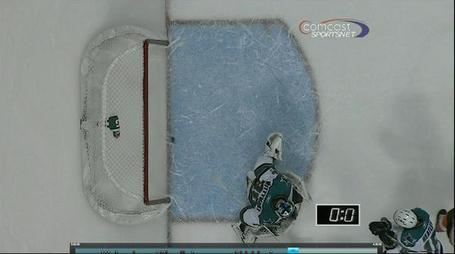 In what is bound to make highlight reels around the country tonight, and will go down as the closest non-goal in NHL history, Father Time sent an economy sized package of amnesty to Philadelphia tonight via express delivery. Bag em and tag em boys, we deliver past 9 PM EST on Wednesdays.

Logan Couture and Ryane Clowe would go on to finish the Flyers in the shootout, putting a pair of backhanders past early Calder favorite Sergei Bobrovsky to complete the comeback. San Jose received goals from Clowe and Couture in regulation, as Joe Pavelski and Jason Demers also added tallies.

It was a third period to remember after a first forty minutes to forget.

Philadelphia controlled the play for most of the two periods, entering the zone with ease and cycling the puck around the seemingly overmatched Sharks. But despite the issues in their own zone, San Jose would get the first goal of the game after a faceoff win in the dying seconds. With the puck being kicked out to the point, Niclas Wallin sent a shot towards Bobrovsky. Ryane Clowe got a a fortuitous bounce off his body by doing the right thing and heading to the net, allowing the Sharks to escape a tepid first period of play that saw them botch zone entries and mangle their limited opportunities.

The second period was more of the same, as the Sharks continued to allow easy zone entry for Philadelphia and struggle to put anything together from their blueline up. Claude Giroux, who is well on his way to becoming an excellent top-tier forward for the Flyers, capitalized on a rebound in the crease to put the puck past Niittymaki after Justin Braun failed to box out his man.

The scoring wouldn't stop there however. Ville Leino executed a nifty spin move high in the zone, beating Niittymaki, and the Sharks continued to struggle in their own zone. A pass from former-Shark Matt Carle from the halfboards worked it's way through the sticks of about three Sharks in the defensive zone, finding Nikolai Zherdev at the end line who subsequently tapped the puck in from an odd angle. The second period saw San Jose get outshot by a tune of 14-6, a period eerily reminiscent to the one we saw in Detroit on Tuesday before the Sharks turned it around.

But San Jose would take a little longer to get going tonight, as the Flyers would draw blood again in the early third. Coming up the ice on the rush, Leino would make an excellent drop pass to Carle who once again whipped a feed across the ice that found a teammate. Scott Hartnell would get credit for the goal, camping out in the crease while Sharks defenseman Douglas Murray showed up on the scene a half tick late.

And then it began.

Despite opinions to the contrary, it seems as if this road trip has brought out the Sharks of 2009-2010. A quick strike team who can return from any lead imaginable, one who can never be counted out of games. It seemed as if last year saw San Jose notch back to back goals at a feverish rate, an asset to their game that was missing up until a date at The Joe on Tuesday.

Tonight, they made Tuesday's comeback seem like child's play.

Jason Demers put the Sharks within two afer a wicked wrist shot beat Bobobobroskyski up high. Logan Couture, who garnered rave reviews from Versus analyst Darren McCarty before tonight's game, continued to rocket up the Calder Watch standings with a heady play that saw him crash the net looking for a rebound. With the team within a mere goal of tying the game, Sharks fans across the nation settled in for what was expected to be an electric finish in Philly.

Pavelski would finish that sentence before it was even completed. A faceoff win led to a brilliant chance for the 26 year old center, and as he is wnt to do in big moments, he made that opportunity count. San Jose had done the unthinkable, storming back in the third period to knot the game at four.

Three goals in four minutes, a breathtaking amount of bravado and boldness from a team that had yet to come back from a third period deficit during 2010-2011. If tonight's festivities indicate one thing it is that expectations for San Jose should continue to be as high as they ever were. There is nary a reason the Sharks should come out with a lull to start any given game, and no amount of reasons that make this year's inconsistency any more understandable.

But on nights like these, there is clearly no rhyme or reason to the ways of the hockey gods. The unfathomable suddenly tangible-- the mythical suddenly undeniable non-fiction.

Hell, we'll probably see some of both. And it's safe it's in your best interest to be there every step of the way.

Because tonight we learned that "Play to the final buzzer" just may not be the lifeless cliche it always seemed to be.

Tonight's story title provided by Nick Lush. Want your headline to be included in the next FTF recap? Follow @fearthefin on Twitter and click here for more.