Doug Wilson on the Olympics and Nabby's and Patty's Contracts

Share All sharing options for: Doug Wilson on the Olympics and Nabby's and Patty's Contracts 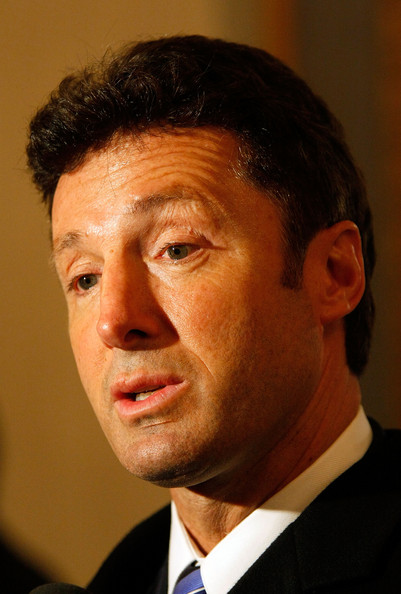 While I hated the score of last night's game, I at least enjoyed the pregame show as our Olympics were honored by the team and the fans. That was as classy of a move as I remember.

While those of us residing in warm climates of California may not feel the hype of the upcoming Olympics just yet, with Superbowl coming up and all, that hype is starting to reach its peak in other countries, such as Canada or Russia. As I've written before, Russia is making a major push  to promote hockey with recent resurgence of winning traditions and a new generation of superstars, so the press coverage of hockey back in the Motherland has increased drastically. As a result, one of the leading sports journalists for no. 1 sports outlet Sports-Express, Igor Rabiner, is currently walking the streets of San Jose and have been writing articles on the hockey culture here and  the Sharks Olympians. He recently interviewed Nabokov, Heatley and Doug Wilson, and I'll share with you part of these interviews in the next few days. Whenever our Sharks speak to a media representative that is not North American, they tend to be more honest and deep.

Rabiner was particularly impressed with the kind of pregame show that the Sharks put up yesterday for our Olympians (and of course, especially with the roar the crowd gave when Nabokov was announced). He interviewed Doug Wilson about the Olympics, and about the status of contract negotiations with Patrick Marleau and Evgeni Nabokov and we're sharing parts of that interview after the jump.

Who's the author of the idea for tonight's pregame?

Our owners and our administration. They thought we should give the players their due for participating in such an important event. We're very proud of our Sharks who will represent their countries, and we wanted to send them that message one more time.

Do you want NHL players to continue participate in the Olympic games?

I live in today and my job is to make Sharks better. I'll let others decide that.

How special is it that you may see the Sharks line at the upcoming Olympics.

Yes, I hope they keep Joe, Patrick and Dany together. They have a great chemistry and as we say here, they're real "hockey rats". They love playing hockey and they give it their all. Right now it's one of the best lines in the NHL, if not the best.

How do you like how Nabokov is playing this season?

He's playing as good as we used to him playing. He's one of the top goalies in the leagues and we're proud of him.

It's good to be proud of him, but he's in the last year of his contract. Will you offer him a contract before or after the end of the season?

We never negotiate contracts during the season. Nabby knows and understands it.

Is it the same story with currently the top NHL scorer Patrick Marleau, whose contract is also expiring?

All players play by the same rules. We don't want to create any bad situations within the team, so there are no exceptions for anyone.

Are you afraid that Nabokov and Marleau may hit the UFA market this summer?

It's very simple - while the season is in action, there are no discussions about anything else besides the team and its performance.

Will you at least give an offer to Nabokov after the season?

We never discuss any contracts during the season. Ever.

No comment. We'll decide when the season is over. There should be no distractions to what we're trying to achieve this season.