Heatley on Russia, the Olympics and the Trade to Edmonton

Share All sharing options for: Heatley on Russia, the Olympics and the Trade to Edmonton 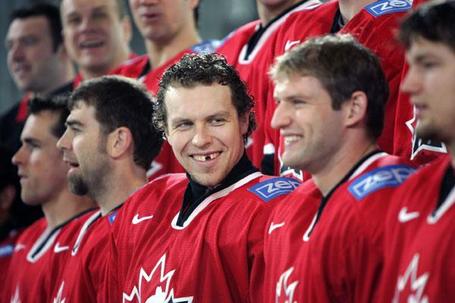 Not sure if you know this, but Dany Heatley is perhaps the most popular Canadian player back in Russia (are you shocked it's not Crosby?). He spent most of his career playing alongside many Russians. He also spent a portion of the lockout season playing in Kazan for AK Bars, and although he only played 15 games there, he still managed to become a fan favorite. With that in mind, Russian correspondent Igor Rabiner from Sport-Express interviewed Dany on his recent visit to San Jose i, and we're sharing parts of that interview below where Dany talks about Russia, the upcoming Olympics, which line is better - Spezza or Thornton line and some juicy details about why he rejected the Oilers trade.

You're quite connected to Russia in your life. Based on your experience, what do you think of Russians?

I love Russians and I have many close friends among them. One of them is Ilya Kovalchuk, who joined Atlanta at the same time with me. He's not just a great player, but he's a true friend. I can say the same about Slava Kozlov. I  built some good friendships with the guys in Kazan. It also happens that in every team I play I meet another great Russian player and a great person. In Ottawa - Anton Volchenkov, in San Jose - Evgeni Nabokov.

What was the most unusual impression about life and hockey in Russia?

Unusual happens only when it shocks you. Nothing in Kazan or Russia shocked me. Sure, it's different from Atlanta or Ottawa - different traditions or the way of life. But I was surrounded by great guys who were ready to show me where to go and where not to go. So I didn't get into trouble and enjoyed my time there.

How did you feel about bigger rinks?

I'm used to them, since I've been to so many World Cups. The style of the game changes, and in the Russian league the guys are very skillful and great skaters. It is more about puck control than pressure. Here in the NHL it's very simple - push and press the puck even in other team's defensive zone. On a bigger rink there is more time to look around, to turn around, to think and to play smarter.

Do you want to play in Vancouver Dream Game, Canada - Russia?

The most important for us is to reach the final. If Russia reaches it too, even better, because that guarantees a great game. They have a great team. They beat us at the last two world cups, and I can't forget that. We'll try to pay them back.

Do you still regularly talk to Kovalchuk?

Of course. With some friends you still talk even when you're in different parts of the country, as we are right now.

Has he changed since the two of you tried to raise Atlanta from the ashes as a pair of 18 year olds?

Well, we're older, but the personalities don't change or develop. He's still a great player on the ice, but it appears he's more relaxed off the ice.

In his interview Kovalchuk had a lot of good things to say about you, especially how you helped me to get used to Atlanta and how he visited you in the hospital after your accident.

He's a great guy and a good friend. We did a lot together on the ice and off the side, and no one can take that away from us.

Who do you think will be the favorites to win in Vancouver?

There will be many good teams there. No one can dominate hockey. We have to remember that many countries play well, and there will be no easy road to the final. It's not a cliche, but it's a true situation today.

What's more important for you - to win the Olympic gold of the Stanley Cup?

Both are important but in a different way. [pause] Perhaps Stanley Cup is a bit more important. We've dedicated our whole careers to the NHL, and every year you're competing for that trophy. You walk around it, and your appetite is only getting stronger. We're only thinking about the Olympics every four years, so it's a close second.

You're going to the Olympics as the whole line that is currently the best line in the NHL. What's interesting is that all three of you have left shot. Is that a problem?

What's a better live - Pizza-line in Ottawaywhere your line sometimes scored 6 goals a night that awarded pizza to every fan in the stands?

The line in San Jose is faster and bigger. The line in Ottawa was good too, but in a different way.

You demanded a trade twice in your career, in Atlanta and in Ottawa. Is San Jose the kind of place where you can stick for years?

Absoluteley. We've got a great team, great city and great fans. What more can I wish?

Was it hard to demand a trade from Ottawa, after you only played a year on a new contract there?

Of course. It wasn't something that I decided spontanously. I thought a lot about it and it was a hard decision to make. But I knew I had to.

You declined the first offer to be traded to Edmonton. Why?

That's in the past. Sorry, but I don't really want to think about it anymore. I'll just say that I knew I also had an offer from San Jose. This is exactly where I wanted to end up, and this is exactly what happened.