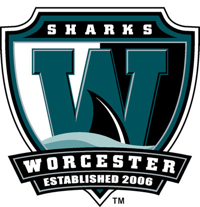 Three days after setting a franchise attendance record during a 2-1 win over Providence on Saturday, the Worcester Sharks entered last night's game at the DCU Center with an opportunity to set a few more.

And they did just that.

Despite playing without their best forward in Logan Couture, Worcester continued their phenomenal season by defeating the Syracuse Crunch 3-1 in front of an announced crowd of 2,603.  Andrew Desjardins scored two goals, including one just 11 seconds into the third, to bring his season total to 18. T.J. Trevelyan also found the twine to bring his team-leading total to 25.

But the real story last night was how they rewrote the record books.

The win over Syracuse set a franchise record for both home (25) and total (44) wins in a season. And with ten games left to play, you have to figure that bar might be set just a little higher for any future teams looking to surpass the mark.

Al Stalock also continued his season long dominance, making 24 saves en route to his 36th win of the year. That victory propelled him to first place all-time for wins by an AHL rookie goaltender, surpassing Corey Hirsch who had 35 with the Binghampton Rangers in 1992-1993.

Stalock had already broke the Worcester Sharks franchise record for wins by any goaltender earlier this season, eclipsing the 30 win mark set by current Shark Thomas Greiss in 2008-2009. Furthermore, Stalock holds the franchise record in shutouts (2), and will likely break the appearance (57) and minutes (3,346) mark by the culmination of this year.

In an interview with Fear The Fin earlier this season, Stalock spoke about what has helped prepare him for the extensive amount of ice time he has seen.

"I think that part is taken care of in the summers, preparing yourself for a year long season. If you’re in the weight room or on the bike, or just getting your body ready," Stalock said. "We do that during the year too, to keep it up, but I think it’s crucial in the summers to make up ground in your conditioning, keep it at a high level so you’re ready to go from the start."

He also gave some insight into how he approaches stopping the puck.

"There's two different breeds of goalies, guys that rely on reflexes and a lot guys that rely more so on blocking and percentages," Stalock said. "For me, I like to rely on my athletic ability and natural reflexes to make saves along with my competiveness. Those all combine into the style of game I like to play."

Stalock and the Sharks are now sole proprietors of the Atlantic Division top spot, leading second place Portland by five points. And although a seven game road trip looms large on the docket, with a date against the league-leading Hershey Bears this upcoming Saturday, there are still a few more opportunities to continue setting milestones in 2010.

With another creeping up just around the corner.