Is Evgeni Nabokov seeing too much time between the pipes?

Share All sharing options for: Is Evgeni Nabokov seeing too much time between the pipes?

Going into Thursday's game against Nashville, Nabokov will bring a .927 SV% to the table, good for third in the league amongst qualifying starters. He sees an average of 31.3 shots per night, or in other words, the Sharks defense is ranked 22nd in the league in terms of this metric. For all of the defensive issues and miscues that have plagued San Jose since the outset of this season, Nabokov has been steady and reliable; a presence between the pipes that has masked those lapses and kept the team in the business of winning hockey games. He may not be the sole reason the Sharks have been flirting with the top of the Western Conference standings all season, but he definitely is the biggest.

Which makes it all the more important that he is handled correctly by the coaching staff. And in my opinion, he hasn't been. This is what I had to say at the beginning of the year when taking a look at the roster:

Nabby dealt with some lower body injuries during pockets of last season, and his increasing age makes him more susceptible to that. I wouldn't mind somewhere in the GS range of 58-24 between the pipes. It's a damn near lock San Jose makes the playoffs, and testing out the pipeline can only improve Wilson's decision making in the future.

There seems to be an assertion amongst Sharks fans that Nabokov is at his best when is seeing a lot of starts. This likely stems from three situations:

1) His first year in the league where he saw 66 starts en route to a Calder Trophy. It cemented him as a fan favorite in San Jose, and served as a priming function when discussing Nabokov from then onwards.

2) The two seasons following the lockout where he split time with Vesa Toskala. Nabokov was atrocious in 05-06, putting up a .885 SV% and failing to start a single game in the playoffs. Head coach Ron Wilson continued to split the starts in 06-07, and Nabokov struggled until mid-February where he was given the starting role outright and logged big minutes down the stretch.

However, the statistics just don't back up that assertion.

Here are Nabokov's six legitimate playoff runs where he was the starting goaltender in at least half of the team's postseason games:

Essentially, whenever Nabokov stays under sixty starts during the course of the regular season he excels during the playoffs and improves his totals; whenever he climbs above sixty starts, his numbers drop.

If you include the Olympics in this year's totals, Nabokov will make his sixtieth appearance Thursday night against the Nashville Predators.

Those pre-lockout numbers don't necessarily concern me however. They provide a nice backbone to a study such as this of course, but Nabokov is at a different point in his career now with increasing age effecting his performance. It is more beneficial to look at the last three seasons of play and see how his SV% reacts to the number of games he plays in: 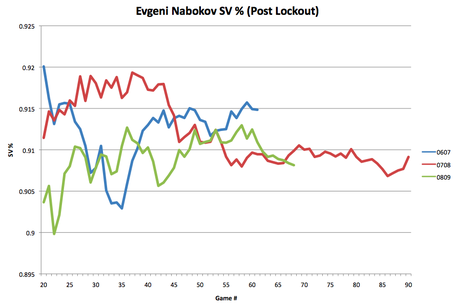 Looking at the chart, it's pretty easy to see the effect Ron Wilson had on Nabokov by riding him for that many games in 07-08. Around the 45 game mark that workload really began to take it's toll, and a great beginning to the year was essentially spoiled as the games increased. That, in and of itself, should blow the "Nabokov plays better when he starts more" theory out of the water.

Evgeni Nabokov is currently on pace to start 70 NHL games. The coaching staff has not given Greiss more than three starts in any month this season, and with the stretch run upon us, I suspect that philosophy will not change. Tack on an extra three games for Nabokov's stint with Russia in the Olympics and it's safe to consider this year 07-08 territory in terms of games played for the Shark netminder.

The positives? Nabokov's SV% has not undergone the same transformation as it did that fateful year, staying in the .920-.930 block all season long. He is in the midst of a Vezina-caliber season, and will be playing for a contract next offseason.

So does this strong play continue as the number of games increase? Does he regress to his career average SV% based off the possibility that the first five months of the season were statistical outliers? Or does an increased workload begin to take it's toll and decrease his effectiveness?

Only time will tell. But if history is any indication, it probably should have never gotten to this point to begin with.