For starters, hats off to SwisherThresher for setting up a fanpost where we could comment on NHL games down the stretch that affect the Sharks.

I think the majority of us agree that avoiding Detroit is the best route to the Stanley Cup Finals-- as ievans has stated in respect to Stanley Cup Champions, "The last time any team’s come back from a first round 7 gamer was when you could purchase Hypercolor shirts, and Kris Kross would make you jump, jump." That would be the year of 1992 when Pittsburgh won their second Cup in a row.

It's safe to say a seven game series with Detroit would be a distinct possibility and probably the toughest first round draw in recent San Jose Sharks history (yes, including Anaheim). That being said, I refuse to root for them today. There is no way I send any positive energy towards that organization this close to the playoffs. Cheering for Detroit to win was grounds for capital punishment in the Middle Ages, and although society as a whole has moved away from the barbaric practices that plagued that dark time, the basis for those actions were noble and true.

Let the cards fall as they may-- hopefully they turn up something other than red.

At any rate, what we have today is a front page thread to comment on the Western Conference games of the day. My buddy Kit Perkins has been all over the various scenarios that could present themselves, and here's what he came up with last night:

* If Detroit loses in OT and Los Angeles picks up at least one point, San Jose plays Nashville.

* If Detroit loses in regulation and Los Angeles picks up at least one point, San Jose plays Detroit.

The relevant games on tap for tomorrow:

By mid-afternoon you better have your game face on. Speaking of which, make the jump.

Fear The Fin has seen a lot of good luck charms in it's day, but none has proved to be more dangerous than The Palin Mask. This glorious being has a long and storied history of winning hockey games, but she's a fickle mistress-- tread lightly if you consider turning your back on her. If the Sharks find themselves at a turning point in the series, we cannot retreat. We must reload.

For anyone who plans on commenting on Fear The Fin during the playoffs, here is the plan of action.

2) Click on your username in the upper left hand corner of your web browser and go into "Edit Profile".

3) Set the Palin mask as your avatar.

4) Feel the mojo coarse through your veins.

5) Kick a hole through your front door.

This is anything but a partisan statement-- Fear The Fin in no way endorses Sarah Palin as a politician (nor do we not endorse her). FTF is a sports blog dedicated to the San Jose Sharks, and we keep our political beliefs and practices strictly confidential. We cannot stress this enough.

But when it comes to providing mojo, Palin Mask has demonstrated an unprcedented ability to get the job done. This cannot be denied. In turn we humbly submit ourselves to you oh Palin mask, fighter of the lamestream media's preconceived notions of the San Jose Sharks, defender of liberty from the tyrannical rules of the powers that be.

Guide us to the glory land. 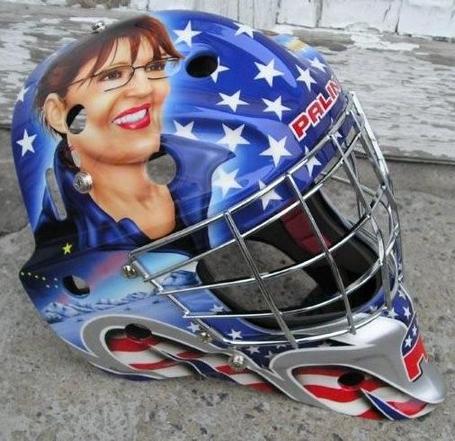 May your iron-will serve as lighthouse for our souls.