Heading into the final day of the regular season the San Jose Sharks had four potential opponents they could play in the first round of the NHL playoffs. And while no series is safe in the volatile Western Conference where first round upsets are as common as a Mike Ricci jersey at HP Pavilion (or the Pepsi Center for that matter), drawing the Avalanche is the best possible outcome the organization could have hoped for.

Since the NHL lockout in 2004-2005 San Jose hasn't had it easy in the first round-- although some may remember the Predators as a pushover due to a pair of 4-1 series victories, those were good teams on paper. Tomas Vokoun's injury in 2006 cost them dearly as they were forced to start an untested Chris Mason, and the 2007 season returned a nearly identical team that couldn't manage to buy a break despite logging their second straight 100 point year.

Calgary in 2008 was a gritty team who has always had a bitter rivalry with San Jose, and the Flames were able to claw and grind their way to a seven game series that ended with fireworks courtesy of Jeremy Roenick. The elongated time it took to dispatch the Flames took a fair amount out of the team's energy stockpile, and after San Jose dug themselves into a 3-0 hole to start their second round series against Dallas, there was little hope of staging a comeback.

And then there was Anaheim.

With the Avalanche struggling down the stretch (7-13 since the Olympics in non-shootout games), and the Sharks managing to put the pieces together since their dismal six game losing streak that ended with a win over the Minnesota Wild on March 23rd, the stars have shined on San Jose for the first time in a good while when it comes to the strength of a first round opponent. 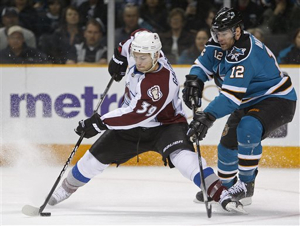 Make no mistake, despite the untested youth found on the Avalanche roster, they possess a fair amount of weapons at their disposal. The one aspect of Colorado's game that can hurt the Sharks is their team speed-- they are an extremely dangerous team in transition, and San Jose's blueline has consistently struggled with nullifying that aspect of Colorado's game throughout the season.

In terms of notables, Paul Stastny is the engine that drives the Colorado offense. He has good vision and a knack for playmaking, and is able to chip in the odd goal from time to time. Think Joe Thornton without the size. San Jose Sharks head coach Todd McLellan will hard match Marc-Edouard Vlasic against Stastny's line for every single game at HP Pavilion. Chris Stewart is an excellent power forward who protects the puck very well below the circles and has good amount scoring touch in close. Think Ryane Clowe with better skating ability.

Matt Duchene is one of my favorite young players to watch, and despite nearly being forced to think poorly of him for the next two weeks, you can't help but love watching this kid play. He's fast and able to stretch defenses, carries the puck well, and has a knack for playmaking as well as goal scoring.

Milan Hejduk has struggled with inconsistency and injuries throughout his career, but has a wealth of goal-scoring ability. He has a dangerous wrist shot that can get hot in a seven game series. Peter Mueller has lit the world on fire since being traded from the Phoenix Coyotes at the trade deadline, and found himself right at home with the young locker room.

What Colorado lacks is a premier goal-scoring forward. San Jose's top line of Dany Heatley, Joe Thornton, and Patrick Marleau contains two guys who can score at will, nestled in between a world-class playmaker. These assets eclipse anything Colorado will be able to throw the Sharks way during the next seven games. The Sharks secondary scoring has also begun to blossom, with Logan Couture, Manny Malhotra, Torrey Mitchell, and Jamie McGinn beginning to get hot at the right time.

The Sharks should win this battle every time. 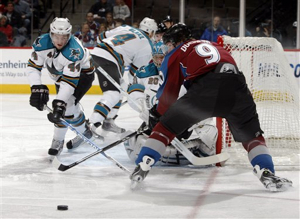 The blueline is the Achilles heel of San Jose, and has been for some time-- the good news is that Colorado has many of the same issues. Both units bleed shots against, with San Jose averaging 31.4 shots against during the year (20th) and Colorado averaging 32.1 (25th).

A defenseman who is going to give San Jose the most trouble this series will be one familiar to the organization. Joe Thornton will see a healthy dose of Scott Hannan on nearly every shift he takes, and whether or not Hannan can shut down the Sharks top line will play a big role in evening the playing field in terms of forward depth. This is the one matchup Colorado will be playing the most attention to, and it will likely determine the outcome of the series.

The rest of the blueline ranges from unproven to aging. John Michael Liles and Kyle Cumiskey run the power play well and will provide the offensive output, but lack physical acumen in their own end. Ruslan Salei was injured for the majority of the year and is the likely scratch. Adam Foote plays a solid defensive game and wears the C, but is pushing into Chris Chelios territory in terms of age. Ryan Clark is a good young physical defenseman with some upside, but won't be asked to play against anyone other than the bottom six of San Jose.

With Rob Blake's rebirth following the Olympic Break, San Jose holds the edge once again in this category. Colorado doesn't have a premier offensive defenseman such as Boyle, and although Hannan holds his own when compared to Marc-Edouard Vlasic in the shutdown role, the Sharks have a deeper cast of players from which to draw from. This may have been the only matchup where, at face-value, San Jose holds a defensive edge.

Whether or not that translates to success is another matter entirely-- as mentioned before, Colorado's quick forwards could spell trouble for San Jose. However, the same goes for San Jose's premier forwards going up against a Colorado blueline that has had trouble limiting opportunities in front of Craig Anderson.

While the defense will remain an issue for San Jose until this playoff season comes to a close, the unit lines up favorably against Colorado. 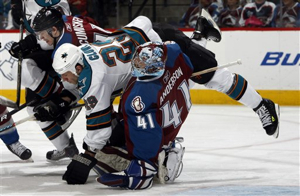 Craig Anderson was a man on fire during the beginning of the season, leading the league in save percentage and nearly singlehandedly guiding the Avalanche to a 10-2-2 record in October. He has proven time and again that he is able to steal games, and his play in Florida before hitting the free agent market made that performance understandable to many in the hockey community.

However, as the year has gone on, Anderson began to struggle. Whether due to the workload of seeing forty three more starts than his career high, the fact that Colorado's defense has had problems limiting opposing team's chances, or a little of both, the air of mystique surrounding Anderson has all but diminished. A .893 SV% since the Olympic Break should reduce the fear of another Jonas Hiller-esque performance, especially considering the blueline that Colorado ices.

The book on Nabokov the last few seasons has been to go five-hole, but after being exposed in a playoff series against Anaheim, he has done a very good job of limiting those types of goals. Like Anderson he has seen a large amount of starts and struggled since the Olympics (.902 SV%), but his play in the last five games seems to indicate the Russian netminder has found another gear.
Both San Jose and Colorado will rely on their goaltenders to bail their respective defenses out, and both have proved they have the ability to do so over the course of this season. But with San Jose holding the edge in defensive depth, as well as the fact that Nabokov is aware of the physical toll sixty plus starts can take on the body, it's hard to pick against number twenty. 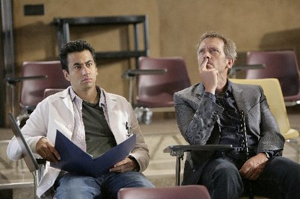 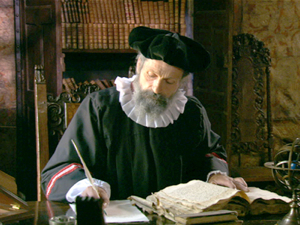 Although the Sharks struggled coming out of the Olympics, Colorado has been even worse off. The Sharks blueline will always be a concern, but it is an area Colorado will have trouble taking advantage of considering the lack of a premier goal-scorer who can put the team on his back. Peter Mueller and Matt Duchene playing through various ailments (if they play at all) does little to help make up that ground.

The Avalanche are the best first round draw San Jose could have asked for. A strong series that builds momentum could go a long way towards igniting the Sharks on a torrid playoff run and allow them to accrue the confidence necessary to obtain what they are set to do.

It will be far from a walk in the park, but this time the good guys get the girl. San Jose in five.