Just when things appear to be winding down, it hits you that they're just getting underway.

The Grim Reaper will be out on the town tonight, grabbing a few cocktails before the game with the Fat Lady and Tom Brokaw. When ten minutes are left in the third you'll realize what life is all about.

Not much you can say other than this will probably be a dog fight from Colorado. The Sharks have dominated the majority of play during the course of the series, but Craig Anderson remains a wolf in a trenchcoat on the opposite end of the ice. Last time the Sharks tagged him for 4+ goals he came out and played the game of his life in the Pepsi Center and secured a victory. I doubt anyone can say with supreme confidence that San Jose has finally got to Anderson. He has been David's slingshot in the hip pocket of Colorado all season long, and just one more superhuman performance could mean a date with game seven back at HP Pavilion.

Odds are things begin to fall into place for San Jose as the ratio of scoring opportunities begin to balance out. Those odds said the same thing on April 13th. Best not to dance with devil at this juncture. 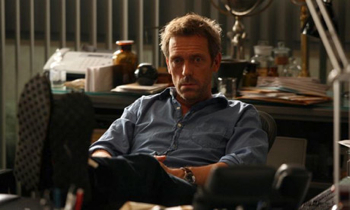 As we mentioned before game four, San Jose's willingness to finish their checks and relentlessly pour on the physical game has been a huge positive this series. Coupled with the amount of shots the Avalanche have been forced to block, the physical fatigue on the Avalanche has begun to take it's toll.

Milan Hedjuk will not play tonight after receiving a shoulder from Paul Stastny during game three; Peter Mueller has continued to skate in practice but is doubtful according to Avalanche head coach Joe Sacco. David Jones, who has not played a game since November, is out. Rumor mill says Matt Duchene is playing with an undisclosed injury.

Dany Heatley chipped in with two assists on Thursday night, but still isn't completely up to speed. Niclas Wallin and Jed Ortmeyer are likely out of commission, pending an update from Working The Corners.

Outside of a Sharks win, one thing I would like to see is an assertive game by Joe Thornton. His play has tailed off during the course of this series, and if San Jose expects to make a deep run this postseason, they will need him to start greasing the wheels tonight.

The first five games have given credence to the assertion that the top line doesn't need to be rolling in order to beat the Avalanche. Clowe, Pavelski, and Setoguchi have been phenomenal this series, far removed from what most expected out of them entering game one. It is entirely within the realm of possibility Thornton could have a sub-par game tonight and still advance to the second round.

You can tell he's getting frustrated out there despite his standard fare of positive comments to the media-- as we have seen throughout the course of the season, Thornton will counter the lack of space opposing defenseman give him and try to force passes into the slot. The Avalanche have done a (relatively) good job of limiting his opportunities, and coupled with Marleau's slow start and Dany Heatley's injury, Thornton hasn't been getting the help a playmaker of his caliber needs to put points on the board.

That being said, I think the trap that we can fall into here is assuming that Thornton's current production will be enough to ensure long term success. He is arguably the most important piece to this team outside of Evgeni Nabokov, and needs to establish himself as such. While he has been far from horrendous, and better than his stat line reads, results are what is required from the big 6'4 center. Especially at this time of year.

These are things we can afford to gloss over as the Sharks dominate the shot totals and such, but when the games get tighter (as tonight very well could), there is another level from Thornton that San Jose hasn't had to tap into yet.

The scent of blood is in the water. All San Jose needs now is for the apex predator to become the frenzied killer we all believe he can be.