Three overtimes, bounces, adversity, and ultimately, success. It was a helluva ride against a Colorado team who just wouldn't quit against San Jose, and a ride that once again reaffirmed that the NHL playoffs are the most intense event in the world of sports.

God save us all. 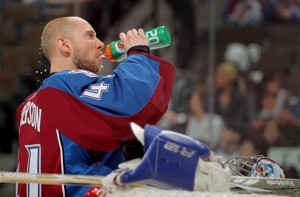 Anderson was by far the most dominant player on either roster throughout the entire series, and one who gave Colorado an opportunity to win every single night. A 51 save shutout in game three was his crowning achievement, but it did not stand alone-- Anderson confused and frustrated San Jose in nearly every single game despite playing behind a Colorado defense that bled shots against and had trouble containing the San Jose forwards for long stretches of play.

Without him this could have gotten ugly. Instead, as his .933 SV% will attest to, the Sharks were faced with the prospect of an elimination game on Monday night in San Jose. Hats off to him. 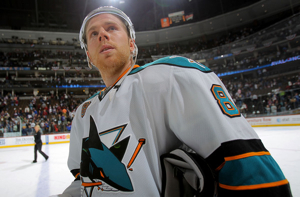 The legend of Pavelski continues to grow and rightfully so-- his overtime winner against Dallas in 2008 set the wheels in motion, and despite a poor outing against Anaheim last season, Pavelski managed to prove that last season was not reflective of his stellar postseason resume.

Five goals, three assists. A game tying goal in the final minute a must win game two, a game winner of overtime in game four, the series clincher last night in game six. Along with Devin Setoguchi and Ryane Clowe, the second line carried the offense for the majority of this series, and without Pavelski, it's hard to think where the Sharks may be sitting today.

GI Joe, American Hero, The Big Pavelski, whatever. This kid is something special. 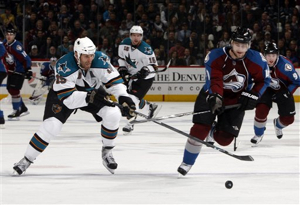 Even though the goal scoring output was spotty throughout the series, San Jose threw a Herculean number of shots towards Anderson and controlled the play for much of the series. Colorado had trouble clearing the puck out of the zone, let alone creating any semblance of an offensive setup, and their dominance on the low cycle can be directly attributed to that. The Sharks finished checks and refused to relent on the physical game, continuously pounding the puck carrier with bodies and a relentless forecheck that produced turnovers.

Coupled with their attentiveness to the defensive end of the ice, it was a near perfect series for every San Jose forward who dressed.

The trio of Pavelski, Setoguchi, and Clowe were phenomenal. Those three did little wrong in the series, and their offense carried the team though it's most difficult moments. Couture's line, which included Malhotra and Mitchell until Dany Heatley was bumped down in game four, also played well throughout. Couture added two goals in game five, and Malhotra once again showed his faceoff muscle by leading the playoffs in that category.

Torrey Mitchell has been a man possessed, stretching defenses and showcasing the speed he exhibited during the 2008 season. The fourth line brought energy on nearly every shift they played and chipped in the odd goal here or there-- the bottom six of San Jose was instrumental in allowing Todd McLellan to confidently roll four lines and ensure that the team would not miss a beat.

The top line of Heatley, Thornton, and Marleau was held to just a goal in the series. Although they played well at points and Heatley is dealing with an undisclosed lower body injury, they didn't show up as often as the team will need going forward. The chances were most definitely there, but generating results from those chances is key-- San Jose will not be able to survive the second round unless Thornton, Marleau, and Heatley pick up their game. 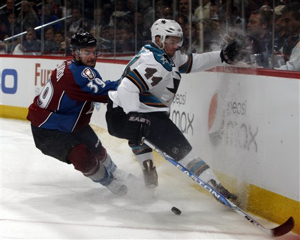 Untested for long stretches of the series, San Jose's defense was able to get confident in the offensive zone and effectively pinch to keep the play alive. The blueline has been a sore spot for this team throughout the year, but against Colorado, those sores were nearly unnoticeable. It is safe to say their greatest test is yet to come.

Rob Blake's turnaround since the Olympics has been well chronicled on Fear The Fin, and he continued that performance against Colorado by getting involved in the physical game. Marc-Edouard Vlasic did exactly what is expected of him-- quietly log twenty plus minutes of mistake free hockey, keeping puck carriers to the outside and limiting opportunities in front of Evgeni Nabokov.

Dan Boyle was his typical self, quarterbacking the power play and playing huge minutes on the backend while chipping in offensively. Jason Demers limited his defensive miscues and continued to provide the offensive spark he is blessed with. Kent Huskins had a great series that flew under the radar, and helped to guide the aforementioned Demers through his first postseason experience.

The lone black mark on the Sharks backend was Douglas Murray, who struggled heavily at times throughout. Whether it be two miscues that led to Colorado goals in game three, a puzzling decision to allow Svatos to drive hard to the net in game six, or getting caught flat footed in the neutral zone as an Avalanche forward danced around him, Murray will need to improve greatly before round two when the Sharks will face a team more suited for the rigors of playoff hockey. 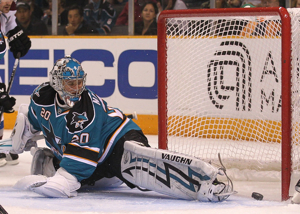 With the exception of the second period of game two, Nabokov had one of his best series as a member of the San Jose Sharks. Part of this was a factor of the low number of pucks he saw, but credit to Nabokov for staying sharp throughout some pretty quiet games.

Nabokov trails only Brian Boucher of Philadelphia in the GAA category, and is top five in save percentage. That is in stark contrast to last year, when he was one of the worst San Jose Sharks on the ice. Nabokov saw pucks, positioned himself well, and limited rebounds. Pucks that would have slid through the five hole last year were locked up tight, and although he'd love to have another chance at that game three mystery, there were few he should have stopped that he didn't.

Unlike last year, Nabokov is part of the solution this year as opposed to being part of the problem. If he can continue to keep the Sharks in games, and the offense continues to pour pucks on net, Nabokov will get one step closer to shaking the label of being a player the Sharks are unable to count on. 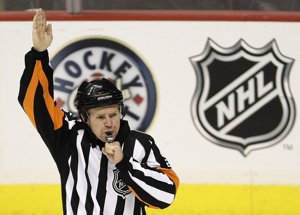 As has been the case for the majority of the year, one unit was consistent and the other was frustrating at times.

San Jose did an excellent job staying out of the box, taking an average of 7.3 penalty minutes a game (1st league-wide). And when they were faced with the prospect of having to make a big kill they did just that, allowing only two goals throughout the course of the series.

The power play sputtered at times and flourished in others-- it was the story of the year, and one that San Jose would be better off addressing sooner rather than later. McLellan should emphasize better zone entry, more people in front of the net, and fewer fancy plays in practice this week in preparation for game two.

The Sharks become the first team to advance to the second round in the Western Conference, and that extra rest will be a positive going forward. As of today, their opponent is undecided, with Detroit leading the way in terms of probability.

Couldn't have asked for a better performance-- could have asked for some better bounces. But the Sharks overcame and asserted themselves after a disappointing game one, showcasing a killer instinct when trailing in the third period of game six in order to secure the series victory.

Written by Plank and TCY