Playoff Pick Em!: Fear The Fin vs. Battle of California

Share All sharing options for: Playoff Pick Em!: Fear The Fin vs. Battle of California 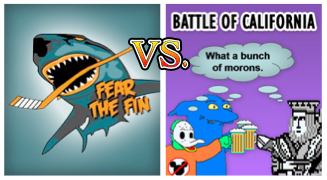 Before the postseason began the writers at BoC and FTF got together in a room filled to the brim with cheap liquor and cigar smoke. As the haggling continued throughout the night, with Twister slowly losing it's appeal due to TCY's insistence we all play naked, a bet was placed.

The site who made the most accurate predictions during the playoffs would be the undisputed champion of the blogging world.

It was set to be an epic no holds barred cage match set up by Vince McMahon, with the stipulation being that the losers would be forced into retirement, never to write about gorgeous Swedes or communist skittles ever again. Furthermore, Sleek would have to post that elusive picture of his face no one can seem to get a hold of, Rudy would be forced to quit his "job" of selling "ice cream" to local elementary school students, and both Mike and Meg would be burdened with watching a continuous loop of Mark Bell highlights. Fear The Fin as a whole would commit seppuku while listening to Justin Bieber's latest single, thereby dying in the most pathetically honorable way possible.

It was, at it's core, the most important predictions of our wretched lives.

And it has only just begun.

For those unaware how scoring works, this post from last postseason should help fill you in. Lowest score wins.

Predictions for the first round can be found here, second round right here.

Thanks again to stufflife of Feel The Teal for running the reader pool for the site this year. It was a ton of work keeping track of everything last year, and he's doing a bang up job by staying on top of things.