Where I went to college Stephen Covey was once a professor, and his book about the Seven Habits was an obligatory reading in three of my business classes. Covey himself lived just down the road and although he's a big football fan, we'll pretend for a moment that he cares about hockey. Despite apparently being a Minnesota Wild fan, in my imaginary world he was kind enough to share his thoughts on the upcoming Sharks game tonight in Denver.* He would be all over this game.

* On some nights, I still dream about being back in college and reading his annoying book for yet another class - it is one of the worst nightmares of my existence. 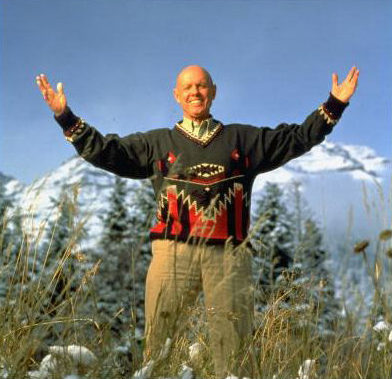 Most of you look at NHL games as a win-lose situation - one team wins, while the other one loses. My whole life I have been preaching Habit #4 - that you have to think Win-win. Win-win sees life as a cooperative arena, not a competitive one. Win-win means agreements or solutions are mutually beneficial and satisfying. We both get to eat the pie, and it tastes pretty darn good!

Tonight's game is going to be very different from all the other games the Sharks have played all season, because a loss for the Sharks is also a win for the Sharks. No matter what the outcome of the game, it's a win-win situation.

As I saw the huge mansion Stephen Covey built for himself through selling books and doing corporate trainings, I do respect his advice and I'll agree with him on this one. Tonight is indeed a rare night where either result is going to be to the Sharks benefit. If the Sharks win, they continue to build the lead over Phoenix, the team continues to build confidence, and we all finish the week in a happy mood. If the Sharks lose, the Avalanche retains no. 8 seed for playoffs for another night, no matter the outcome of the Flames-Blackhawks game.

I do not think that the Flames are that much better than the struggling Avs. But what goalie would you rather face in the 1st round - Craig Anderson, who allowed four or more goals in six games post-Olympics and won just once in the last eight starts? Or would you rather face a certain former Shark called Miikka Kiprusoff?

Speaking of the Pacific division, with the Coyotes win over the Oilers yesterday in another shootout, the race for the Division championship will not be over even if the Sharks earn the two points tonight. The Coyotes and the Sharks will have three games remaining, and if Sharks lose their three games, and Coyotes win their three, both clubs will finish with 108 points and Phoenix would win the Pacific division on a tie breaker. According to the NHL rules, a number of wins is a first tie breaker and if that scenario would play out, Coyotes would have more wins than the Sharks. This doomsday option is still possible, thanks to an idiotic rule that treats shootout wins the same as wins in regulation for purposes of tie breaking procedures. The Coyotes now have league leading 14 shootout wins this season vs the Sharks 6. They don't have to win games in regulation, and yet here we are, still fighting for the Pacific division lead because Coyotes figured out how to win the skills competition.

The Avs are currently on a four game losing streak and lost 10 out of the last 16 games. They are slowly starting to play the way everyone expected them to play before the season started, as Anderson and their offense are  getting cold (only 8 goals in the last 4 games). This game is a must win for Colorado, and there is no win-win situation for them if they fail to secure the two points against the Sharks. With Calgary sitting right on their heels in the standings, the Avs won't be taking any shifts off.

Prediction: It's a win for the Sharks, one way or another.