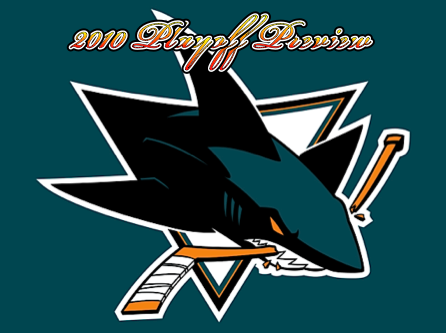 The postseason is right upon us, so Plank and TCY thought it would be prudent to highlight each individual player on the Sharks roster heading into these glorious days. It gives us an opportunity to consolidate all the information we've obtained since the beginning of October, as well as examine the team at a micro-level. Every installment in this series can be found here.

There is literally nothing like the NHL playoffs in the entire world of sports-- the passion, the pain, the hope, the despair, the unrelenting feeling that this year could finally be the one. Each and every goal dictates whether or not you'll end up in some godforsaken alleyway in downtown San Jose singing songs to alley cats, or at home with loved ones singing songs of victory about the heroic undertakings of a team that has given meaning to the wild world in which we live in.

God save us all.

In Couture's second stint with the team, he showed fans and critics alike why he's regarded as the Sharks top prospect. As was stated in the scouting report before he was drafted, Couture is blessed with amazing vision and a high hockey IQ. He can see the play develop and works well with skilled forwards. Even though he's been paired up with the likes of Dany Heatley, Devin Setoguchi, and Ryane Clowe, he has never appeared overwhelmed. A pure playmaker in every sense of the word, he passes well and can thread the needle like a veteran, regardless of the level of competition.
Although Couture does have some trouble staying on his feet, he never counts himself out of a play. He's a determined player who fights for pucks and has the fire expected of a rookie. Because of this drive and nose for the puck, he controls play in the zone. Again, staying on his feet an issue for Couture, but he is good on the boards and can move the puck well behind the net.
Couture consistently goes to the front of the net and stays in the eyes of the goaltender. His superb vision shows itself again in the form of deflections, which is his forte. His willingness to remain around the net has led to goals by Couture and his teammates. He's very solid with the stick in the offensive zone, and that control (coupled with the vision), also enables him to be a solid defensive forward.
As you would expect of a 21 year old, however, his game still needs work. Both his wrist shot and slap shot are below average. He lacks the true quickness of a sniper, and his release is not deceptive. If the goaltender is not screened on the shot or the puck is not redirected, it is easily read.
Couture is also not fast enough to excel in one on one situations. He looks to pass first on the breakout and in zone which makes him predictable. Because of this, he can tend to turn the puck over. Couture must limit his mistakes to continue to help the team.
All in all, Couture has been a jolt of energy for the team and has added yet another scoring option to a potent offense. If he can continue his hot play into the playoffs, it will bring a new dimension to the Sharks already diverse attack.

Coming in at a cool $700 K, Manny Malhotra is far and away the the best bang for the buck on San Jose's current roster.
In the offensive end of the ice, Malhotra has proved to be more than capable to the numerous roles he has been placed in. Whether it be seeing time on a scoring/shutdown second line with Marleau and Pavelski or a makeshift grind line with Nichol and Ortmeyer, Malhotra has flourished with every opportunity he has been given. He can play the wing one shift, take a defensive zone draw the next, and then see time on the power play. The definition of an all-around versatile forward.
He has an above average set of hands in the passing game, good vision, and can work the cycle down low with his teammates. He seals the boards well on opposing teams attempted clears, and generates consistent speed through the neutral zone to beat defenseman to loose pucks and disrupt the breakout. A good but not phenomenal skater, Malhotra has a knack for picking his spots and reading the play to cut off angles.
Malhotra's slap shot is also one of the best on the team-- low and hard, he produces rebounds that generate second-chance opportunities at a solid clip.
Furthermore, Malhotra brings a great defensive presence to the squad. While Marleau is probably the best rounded forward on the team in terms of offensive and defensive ability, Malhotra is likely the best defensive forward on the team, if not the title holder in that category. He'll kill penalties, commit to the backcheck every shift, and win draws in the defensive zone at an alarming rate. Along with Scott Nichol, head coach Todd McLellan taps Malhotra whenever the team needs to secure possession in front of Nabokov.
The only thing Malhotra can't do is put the team on his shoulders and carry them in games-- that role lies with some of the higher paid players on San Jose's roster, as it should.
Malhotra's versatility is something Todd McLellan has in his back pocket every time he hits the ice. And we couldn't be more excited to see it happen.

Jamie McGinn was a casualty of the Worcester Shuttle this season, logging heavy miles from Worcester to San Jose and back again (and again, and again) as the Sharks attempted to pinch pennies in order to accumulate as much cap space as possible. Following the Trade Deadline, he was finally given a secure roster spot and allowed to grow into his role with the team.

Offensively, McGinn possesses a multitude of tools-- a strong skater who can stretch defenses when carrying the puck on the wing, McGinn has a long and powerful skating stride that makes him dangerous in transition. He can fit on a scoring or checking line, and has worked on the physical element of his game to make an impact on the forecheck when compared to last season.

McGinn's wrist shot is dangerous, and he is able to pick corners when given the space to do so. We consider him the X Factor when talking about the bottom six's ability to contribute to the secondary scoring, and with two goals in his last two games, seems to be elevating his play at the right time.

However, McGinn has his issues, namely consistency ones. While he has a strong wrist shot that gets on goalies quick, he almost exclusively goes high and doesn't produce many rebounds. North-South he is an extremely proficient skater, but lacks lateral explosiveness when changing lanes. He'll be dominant on the cycle and driving hard to the front of the net one night, and then nearly a non-factor the next. Defensively he is generally committed to the backcheck, but will sometimes get caught too deep in zone and forget to pick up his trailers. A lot of this may have been due to a frantic travel schedule at the beginning of the season which resulted in a lack of practice time, but now he has no excuse-- McGinn must become more consistent if he wishes to make a positive impact on the Sharks playoff chances.
The future is bright with McGinn, but as is always the case with San Jose, the future is now. In all likelihood he will be facing below average competition during the postseason with whatever line he finds himself on, and taking advantage of those minutes will go a long way towards putting the Sharks into the next round.

Torrey Mitchell has played different roles this year. Spark plug, martyr, forgotten son. He's had the high expectations for him come crashing down. Now, surrounded by tempered enthusiasm and cautious optimism, Mitchell has begun to play the game that we expected of him earlier in the season.
Mitchell has started to come around offensively, and he generates good speed in the neutral zone. That speed is his trademark; it's what made him such a threat in his rookie season. After struggling to make an impact on games before the Olympics, he's regained some of that lost speed and has subsequently become a better player in all areas of the ice. His assist numbers of late have shown that there has been an improvement in his vision and passing ability, and he's gradually been given more time on the penalty kill. His decent hockey smarts enable him to play fairly well in most defensive situations, and although he wont be relied upon to carry that penalty kill, he'll be able to chip in. Mitchell is also able to draw penalties well, and doesn't take many stupid ones. And although it's hard to think of him as a typical grind line player, Mitchell can provide a little more offensive pop than most.
Mitchell's game still has its flaws. He's small in stature and has a tendency to get knocked around. Therefore, he's pretty porous on the low cycle and has trouble retaining possession of the puck in the offensive zone. He can get in quickly on the forecheck, but needs to finish his checks better to generate chances for his line mates.
Because his speed is his greatest asset, he needs to commit to being puck carrier on the rush. Too often Mitchell crosses center ice and passes to the nearest outlet player.  He also needs to work on hands and wrist strength to become a more consistent offensive threat, but likely won't be able to rectify these issues before the start of the playoffs.
With his speed returning, he could be a source for secondary scoring on the lower lines. Mitchell has looked relatively good post-Olympics, and our hope is that he continues his strong play regardless of his line mates, which have varied game to game.