Share All sharing options for: Shooting Percentage leaders and losers in 2010 playoffs

After Mike Cammalleri took advantage of a Pittsburgh Penguin neutral zone turnover to put the icing on the cake of Jaroslav Halak's 3-1 win earlier this afternoon, one had to figure the Montreal forward was at the tops of the shooting percentage charts this postseason. The Canadiens have been woefully outshot during the entire playoffs against the Eastern Conference titans Washington and Pittsburgh, and yet have managed to post a 5-4 record by getting excellent goaltending and favorable percentages by capitalizing on the rare offensive chances they are presented with.

Here are the shooting percentage leaders and losers amongst forwards with at least 20 shots in the 2010 playoffs:

As great of a postseason Joe Pavelski is having, it's probably hard to expect for him to continue racking up these types of goal scoring numbers-- in order to continue scoring at his current pace of a goal per game, it's likely he will need to increase his shot volume considering his unusually high shooting percentage (23.2%) when compared with his career average (10.2%).

Here are some other notable San Jose Sharks heading into tonight's game against Detroit:

In a small data sample such as the NHL playoffs, it's hard to predict exactly how the bounces will play out-- as we saw against Colorado in the first round, as well as Montreal and Washington, "it's all white noise right now, chaos and calamity. These things don' necessarily even out. They just exist" [link]. A short seven game series, at least relative to a player's season and even career, has a tendency to do that.

However, if Patrick Marleau is functioning at close to 100% tonight coming off a bout with the flu, I would wager that he and Heatley begin to pick up the slack in the goal scoring department considering the vast difference between their current versus career percentages. Whether or not Pavelski continues at his current rate is unknown, but probably unlikely unless he increases his shot volume.

Moral of the story? Marleau and Heatley will probably be fine going forward as long as they are healthy and continue to get their chances. They are too adept at putting pucks in the net to continue to post such dismal shooting percentages.

Then again, perhaps this little piece of mojo in my living room carries Pavelski all the way through the postseason: 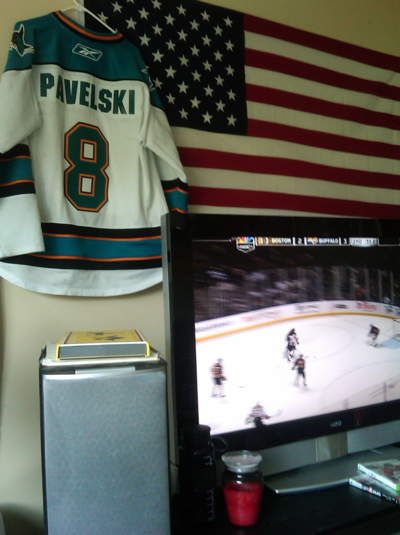 Ya know, that actually seems a lot more likely.