The Paradox of LOST As An Intellectual Superpower: Why It Failed, And Why It Succeeded

Share All sharing options for: The Paradox of LOST As An Intellectual Superpower: Why It Failed, And Why It Succeeded

After thinking about the season finale of LOST for the better part of the last twenty four hours (and, in some form or another, the better part of the last six years of my life), it's fairly apparent that The Island was in fact a real place. Christian Shepard's closing comments to Jack in the Church, just before they enter the eternal bliss that only a blinding white light can provide for the viewers and the fictional characters they fell in love with, alluded to this decision.

"Everything that's ever happened to you was real," Christian stated. "All those people in the Church-- they're real too."

The coffin may as well represent the show's entire one hundred and twenty hour experience. The big reveal, where the answers that have intrigued millions across the world will finally be answered, only results in an empty coffin with a nice pillow to lay your head.

My roomate and I-- let's call us season one Jack and Locke, a man of faith vs. a man of science-- have had a very lively debate about the merits of such an ending since late last night. He argues that The Island's sole purpose was to flesh out these characters and make us care about them, and I agree with the basis of that argument.

A significant portion of the show's appeal was always about the characters. Damon Lindelof and Carlton Cuse, the creative heads of LOST, did an excellent job of expanding the depth of these men and women throughout the entire six year run. More importantly,  theyopened the door for us to care about them in whatever capacity we were able to achieve. These characters were the lifeblood of the show. They were the veins and arteries that fed the individual cells of the viewers experience.

However, therein lies the rudimentary flaw of LOST's vast pile of unanswered questions and, in retrospect, cheap gimmicks that pervaded the survivors' lives on The Island. If the characters were the lifeblood of the show, providing nourishment to the hungry cells of LOST fans across the world, then the Island itself was most definitely the heart that pumped those characters into our own. It provided the framework for Lindelof and Cuse to weave their tale, allowing them to craft mystery upon unanswered mystery. These mysteries are what made the characters compelling; how the characters responded and dealt with these mysteries were an inherent part of who they were and who they became.

Without the mysteries of The Island, LOST's characters aren't as intriguing as they need to be in order to carry on a six season show. And by failing to answer basic questions about The Island and all of the brilliantly numerous loose ends that this location posed over the years, Lindelof and Cruse failed in their quest to write something that was special on an intellectual level.

Time travel. The light source. A man who leaves his body to become a Smoke Monster. The Dharma Initiative. The Temple. A wheel that makes an entire island disappear into the ocean. Why Mother murdered Jacob and The Man In Black's true mom. The Lighthouse. The hieroglyphics and who initially inscribed them. The Egyptian statue. The lack of fertility on the island. Valenzetti Equations, Locke's ability to leave his wheelchair, Faraday's quest through time, Desmond's control of electromagnetism. Fast and loose references to political, philosophical, and scientific minds throughout the entire existence of mankind.

And so on, and so forth. 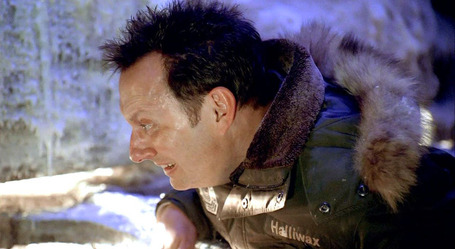 By failing to sufficiently resolve The Donkey Wheel, Lindelof-Cuse looked like an ass

The intellectual promise of what the writers created was the premise, The Island was the heart. If LOST was indeed always about the characters, none played a more crucial role in the development of the show than The Island itself. It was the central character, the most important "individual" we encountered throughout these past 120 hours. It was what made us care about the trials and tribulations of the survivors, produced the struggles that they went through, and provided the canvas by which the writers were able to paint their portrait of the human condition.

By casually ignoring these questions as if they never mattered, all we are left to believe is that the entire six season run was filled with minutia that kept us occupied until the next big twist came. That we were nothing but rats in a cage chasing a piece of cheese which never existed in the first place.

When those mysteries are the vehicle you use to drive the storyline, it raises the question of whether Lindelof and Cuse were the ones who were truly lost all along. As the house of cards began to fall, and the mysteries of The Island became too much to unravel, they piled more and more on top of each other, eventually finding the gall to call it creativity. In reality, they were throwing whatever clever nuance they could find, attaching it to the rudder of the ship, and calling that creativity. All the way until the white light enveloped Christian Shepard in one of the most glorious pieces of melodrama network television has ever seen, we wanted to believe in the masterful storytelling prowess that the show possessed.

Unfortunately, it was nonexistent.

Every great story has a core theme that runs throughout it, and the groundbreaking events are all required to serve some tangible purpose when constructing the resolution. To ignore these mysteries is a complete failure from the perspective of the writing staff. The turning of The Donkey wheel by Locke and Ben, time travel, detonating the nuclear bomb, and the creation of the Smoke Monster were all groundbreaking events that occurred, dwelled upon, and ultimately left unresolved.

All we got was a wink and a grin.

However, what made the show great, and ultimately an intellectual success, were the theories created by the viewers. The level of dialogue we experienced, the questions that were debated until the sun rose, our ruminations on why so and so did this this and what it meant for next week's episode.

What it meant for the next chapter of our own lives.

It spawned a philosophical debate on the meaning of life, paralleling the message Douglas Adams produced in The Hitchhiker's Guide To The Galaxy. In the novel, a supercomputer entitled Deep Thought is tasked with finding The Answer to the Ultimate Question of Life, The Universe, and Everything-- the answer, of course, was 42, and eventually led to another quest to find the question from which this answer was derived.

The moral? There is no concrete answer one can ever expect to find during their trip through the galaxy. Humanity's experience on Earth is one where the answer at the end of the tunnel is not important. It's all about the ride, and your experiences within that ride. Where you eventually end up is inconsequential as long as you remember the emotions you felt during the experience, and the people that you connected with.

That is where LOST succeeded. By showing us that we were just as lost as the creators themselves. That our individual experience is the only thing of importance, that what we take away from it defines who we actually are. Maybe The Island wasn't the heart of the show. Maybe the survivors weren't the blood that was pumped into our oxygen starved cells. Maybe the rabid fanbase was that heart, and our experience observing The Island was where we found our own little slice of redemption.

That will be LOST's legacy. A convoluted story inside a manufactured box of mystery, a frivolous bow placed on top which posed as something deeper than what we initially believed. A failure of immeasurable magnitude from a storytelling standpoint. A failure in the endgame.

And yet, an ultimate success. One that taught us we were the survivors on The Island, that our thirst for a final answer wasn't what made the show special. It was our experiences that did.

I can't tell if Lindelof and Cuse are modern day philosophical masters who knowingly presented these questions, or if they were completely over their heads and expanded the mystery in order to desperately derive an ounce of meaning from the monster they created.

The former seems the most likely. There's too much constipation here, not enough fiber in the diet to remedy these maladies.

And yet, as Mother told Jacob before christening him the Protector of The Source in the episode Across The Sea, "Every question I answer will bring you to another question."

Maybe a final answer isn't what awaits us at the end of this long and winding road-- both on a micro level as sports fans, and the macro level of existing as a human being. For as much heartbreak I experienced on Sunday as two different seasons met an abrupt and unsatisfying demise, denying myself the memories of pleasure and excitement would be a disservice to the man I was, as well as the man I will become.

Maybe it's our experience within these never ending questions that make the whole clusterfuck of unresolved answers ultimately worth our time.