I hate the offseason for a couple reasons.

The first, and most important, is that there is nothing but vague whispers of the promise of watching hockey once again. While the sun shines outside, rain cascades in our souls. And while life without hockey is manageable on some level, especially when one considers the digital age that we live in where NHL Network and other various media outlets (DVD's, online resources etc.) can provide us a fix of some sort via old memories, it is still a trying experience to write about something that is only speculation.

The second reason is the militant attitude human beings take when highlighting "our guys", and the path we traverse when attempting to rationalize ways in which "our guys" could end up wearing teal during 2010-2011. I do it, you do it, the guy across the street does it. We become so attached to these players that we fail to consider market circumstances, logical mindsets of opposing general managers, and the questions that Doug Wilson himself may be posing. Everything begins so specifically that we lose sight of some of the broader implications of our proposals and claims.

The third is that rosterbation, in it's purest form, begins to turn everyone into lunatics. Our needs and desires fluctuate with each passing day-- a week ago we may have wanted to go with a Stalock-Greiss combo, this week we want a veteran to get the lion's share of starts. Yesterday we wanted a big-time winger to come in on the first line, tomorrow we will want a shutdown defenseman to play on the top pairing alongside Boyle.

What I'm attempting to do today is to curb that lunacy, both for myself as well as you. This post doesn't look at any individual player outside of the organization, nor does it highlight a group of players that I think would be great additions to the San Jose Sharks. There is more than enough time for those specifics in the next month.

What we are looking at today however, is an opportunity to lay down a solid foundation for all of the rampant speculation that will pervade this blog until next fall. It looks at the current salary construction of San Jose, positional needs that will have to be addressed in the coming months, and how I would like to see the Sharks allocate the dollars available to them.

The following exercise is based off two scenarios, both of which could definitely change as we near July 1st. The first is that last week Gary Bettman reported the salary ceiling could rise as much as two million dollars for 2010-2011. This exercise assumes it will rise somewhere in the $1.2 M range, giving us an easy figure of $58.0 M to work with when trying to get under the salary cap. It is a ballpark estimate, but better to set a low estimate at this point and avoid reworking everything later.

The second is that the organization will spend to the limit again this season. For our purposes today I assume they do, but again, that is just an assumption. 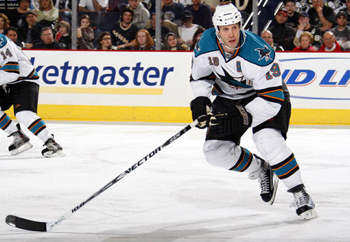 As of this posting, San Jose has six NHL players under contract-- Joe Thornton, Dany Heatley, Ryane Clowe, Logan Couture, Torrey Mitchell, and Jamie McGinn. In other words, two bonafide top line players, one average second line winger, a youngster who could play top six minutes at any forward position, and two third line players-- one with penalty kill ability, and another with some scoring potential.

There's obviously some gaping holes on the roster. Penalty kill help, scoring punch on the top lines, checking line players, you name it and you have it. About what you would expect from a team that currently has six forwards under contract-- halfway home, if you will.

Taking into account back of the envelope contract estimates for RFA's, as well as any free agent targets Doug Wilson may pursue, my personal preference would be to spend roughly $34 M-$37.0 M on the forward group. This allows you room to bring your RFA's under contract, fill out your depth with entry-level players who can fill positions on the bottom lines, and solidify your depth with veterans.

After that it comes down to either going with what you have to stay in that range, or dump salary in the form of a trade to sign an impact winger. 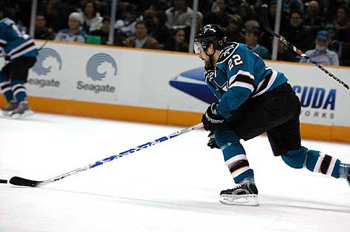 As of this posting, San Jose has five NHL players under contract-- Dan Boyle, Marc-Edouard Vlasic, Douglas Murray, Kent Huskins, and Jason Demers. In other words, a power play quarterback who serves as your number one, a vastly underrated number two who can shutdown opposing forwards, an average top four defenseman with a ton of physical presence, and two bottom pairing players-- one who is serviceable in his role, and another who is a wizard on the power play but needs to be sheltered at evens.

The issues with the Sharks defense have been well chronicled on Fear The Fin during the course of the regular season, and it is in San Jose's best interest to bring in an impact top three player who can play in varying situations, most importantly in his own end. This has been my proposed plan for six months now, and Doug Wilson finally has the salary maneuverability to tickle me with glee.

Taking into account the potential for trades and the likely price of free agent defenseman who could serve as a 2-3 guy behind Dan Boyle, my personal preference would be to spend $18.5 M-$21.5 M on the backend going into next year. 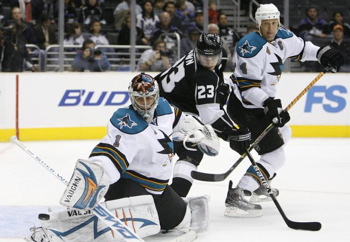 As of this posting, San Jose has one NHL goaltender under contract-- Thomas Greiss. In other words, a backup who did not receive nearly enough this starts due to the coaching staff's insistence to ride the starter for the majority of the year, but one who could potentially flourish in a starting role if given the opportunity.

I cringe at the thought of giving two goaltenders with under 50 combined NHL starts the keys to the car next season, and feel it is necessary to have that number be at (the very least) above 100 in order to give the organization the best opportunity to put them into a position to win every night.

Taking into account the need for a veteran to man the pipes with Greiss, my personal preference would be to spend $2.5M-$3.5M on goaltending going into next year.

In order to understand what resources we hope the Sharks can obtain, we must first take stock of how much we are willing to spend in order to obtain them. I'd like to keep the discussion here devoid of any specific names and instead focus on where the dollars should be allocated.

A comprehensive list of players to target later this week.