The Five Best Contracts in the Pacific Division

Share All sharing options for: The Five Best Contracts in the Pacific Division

In a day and age where the salary cap is just as big of a factor as drafting and development in regards to a team's success (the pillaging of Chicago's roster this summer being a well-used example), building a team into a perennial contender is an extremely arduous process that requires a multitude of things to achieve success.

In order to compete in the modern NHL, organizations require three basic things from a salary cap standpoint. For starters, elite talent that provides enough bang for the buck where management can justify these big-ticket expenses-- an example of this type of player would be Joe Thornton of the San Jose Sharks. Signing a three year deal with the Sharks in the summer of 2008, Thornton will count for $7.2MM against the salary cap this upcoming season, nearly 13% of the available space available to the team. Despite that allocation however, you would be hard pressed to find an individual who doesn't feel that this a good contract for a perennial Art Ross candidate-- it's definitely not a steal by any means, but should be considered very much in line with his fair market value. These are the types of deals you must extend to players of this caliber because, to use a great sports cliche, you're only as good as your best players in crunch time.

The second requirement is veteran and role players who are able to play tough minutes and contribute to various aspects of the game. Chris Drury of the New York Rangers is definitely a second or third line center who can kill penalties and chip in offensively. He's a legitimate professional player that provides value, but at a $7.05MM cap hit over the next two seasons, remains one of the most overpriced players in the NHL today. Recognizing the pitfalls of these players, and compensating them according to their true level of talent, remains one of the most difficult things for NHL GM's to do effectively. These are typically the guys who break the bank for teams, relegating a potential contender into one who is struggling to stay competitive due to non-elite players making top-tier money.

The third requirement for a successful team is young players on entry level contracts who can contribute immediately upon entering the league. Essentially, the talent level these individuals possess is similar to the veterans discussed in the paragraph above-- the only difference being the amount of compensation they are awarded. A player like Logan Couture of the San Jose Sharks ($1.24MM per year including potential bonuses) is a good example of a guy who will be able to fulfill this need for his team.

For today's analysis of the best contracts in the Pacific Division, we will be looking at players who are on at least their second professional contract. Analyzing an entry-level deal, where the base salary is close to the league minimum before bonuses are factored in, serves little purpose considering it doesn't truly capture the negotiating strategy of a General Manager at the free agent table.

Without further adieu, here are the best five contracts in the Pacific Division, with one from each team. 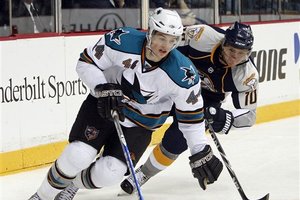 Although Vlasic receives some criticism for his lack of physical play and limited offensive abilities, it's readily apparent that the skill set he brings to the table is worth far greater than the $3.1MM he will be making in the next three seasons. Only twenty three years of age, Vlasic serves in a shutdown role for the Sharks, going against the toughest competition night after night as well as being tapped by head coach Todd McLellan whenever a big defensive zone draw is about to take place. There's not another player on the team whom you would trust with a one goal lead over Vlasic (even if a certain former goaltender may feel otherwise), making him one of the best value contracts in the Pacific Division, if not the entire NHL.

Vlasic may go down as Doug Wilson's best pound for pound signing since the NHL instituted a salary cap following the 2004-2005 lockout. 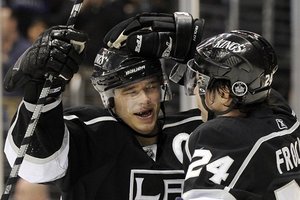 Dustin Brown is an interesting case of a player who tends to fly under the radar in the NHL despite some noteworthy advanced statistics. Able to slide into a checking or scoring role, Brown saw the second highest level quality of competition last season for the Kings while still managing to pot the second highest point total on the team (56). He's broken the twenty goal mark in each of his last three seasons (33, 24, 24), kills penalties, serves as the Los Angeles Captain, and is absolutely phenomenal at drawing penalties. Consider the fact that he drew 49 penalties last season and only took 10, a remarkable +39 in this department that gave his team roughly 78 minutes of available power play time.

In other words, Brown gives his team nearly one minute with the man advantage per game.

At the age of 25 Brown is still improving in all assets of the game, and with four years remaining on his deal, will continue to be one of the best contracts in the Pacific for years to come. 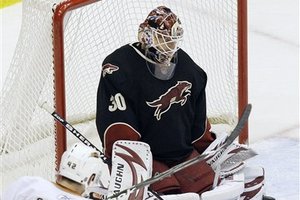 While the era of the high-priced goaltender may be over in the NHL, there's one player who more than earned his keep last season between the pipes. Bryzgalov may have missed out on his first Vezina Trophy win (finishing second to Ryan Miller in 2010), but it's hard to argue that no goaltender was more instrumental to his team's success last year.

Eight shutouts (2nd in the NHL) and a .920 SV% (9th in the NHL) tell part of the story of last year for Bryzgalov, who helped guide the now we're moving now we're not Coyotes to their first playoff appearance since 2002. Although Phoenix bowed out in seven games to the Detroit Red Wings, a 50 win, 107 point season is nothing to sneeze at considering where most pundits predicted them to place in the standings before the season began.

A $4.25MM contract is a little high for a goalie these days, but with Phoenix's success last year stemming from Bryzgalov's performance between the pipes, I have to give the nod to him as the best bang for the buck down in the desert. 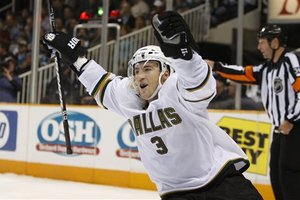 Sharks fans are very familiar with Robidas, one of the most physical defenseman currently in the Pacific Division. Fourth in the NHL in the hits category during 2009-2010, Robidas is far from just a bruising plug out there whose sole duty is to punish opposing forwards crossing the blueline with their head down. He combines a knack for physical play with an ability to hang with the top lines opposing teams have to offer, logging top qualcomp minutes for Dallas during the last three seasons as well as being called on to spearhead the shorthanded unit.

His offensive abilities are also notable, logging massive powerplay time with an ability to bang the twine. Robidas has notched 22 goals in the last three seasons, and is able to move the puck up the ice with a strong breakout pass that contributed to him leading the blueline with 41 points last year.

Although he is already 33 years old, Robidas has proved to be a big part of a Dallas team itching to get back to the postseason, and should again serve as the top defenseman for the Stars during 10-11. 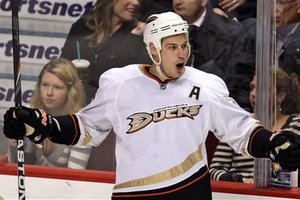 It's hard to think that you'll find any contract better than Ryan Getzlaf's in the Pacific Division, and quite possibly the entire NHL. Possessing phenomenal hands that can be used to thread passes through a pinhole or pick a corner up high with an underrated wrist shot that he doesn't use nearly enough, Getzlaf is currently ninth in the NHL in points per game over the last three seasons. During that time he's logged at least a point per game in every year that he's played.

Furthermore, Getzlaf brings a load of intangibles to the table that would make every General Manager in the NHL jump at the opportunity to add him onto their roster. He's more than willing to play the physical game, defends his teammates in post whistle scrums, and has no problem getting under opponents skins with some well-placed verbal jabs.

Just about as complete a player as you can get, all for the low price of $5.325 for the next three seasons. A fringe benefit to a contract that low is that it also sets an internal cap for all other players in the system during the next three seasons-- Bob Murray would be hard-pressed to offer anything more than that to a budding star such as Bobby Ryan, and with these internal controls set up, it allows him to wield a more effective bargaining chip to deal with impending free agents from within the system.

The only major flaw in Getzlaf's game is his receding hairline. Maybe if Brian Burke hadn't negotiated so effectively in November of 2007 the Anaheim assistant captain would have a little extra dough to pick up some Rogaine.