Doug Wilson: Or, Why I Should Stop Worrying And Realize How Good I've Got It

Share All sharing options for: Doug Wilson: Or, Why I Should Stop Worrying And Realize How Good I've Got It 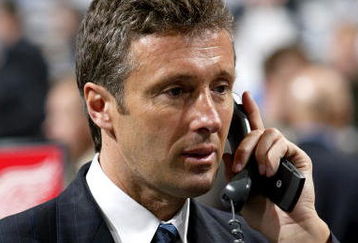 Doug Wilson is one of the best general managers in the NHL. Show me someone who disagrees with that statement, and I'll show you a Sharks fan who expects general managers to have the ability to move mountains. Last year he was voted as the best GM in the Bay Area by the readers by a considerable margin. Even if you disregard the obvious bias of the readers and the general ineptitude of the other Bay Area professional sports teams, Doug Wilson still stands at the head of the pack not only in the Bay Area, but in all of the NHL.

Since he took over as General Manager in 2003 after a season that could only be described as a disaster, he has accrued a 291-135-12-54 record (wins-losses-ties-OT/SO losses). Crunching the numbers, that means the Sharks have gotten 65.9% of the points available during his term. To put it in perspective, the President's Trophy-winning version of the Sharks - you know, the team that locked up the Pacific Division by Thanksgiving in the 2008-09 season - got 71.3% of the points available.

Meanwhile, using only a straight win-lose record, Hockey or Die has calculated that Doug Wilson has the third best win percentage among general managers with their current teams, after Ken Holland and Stan Bowman, who are tied for first. I doubt anyone will dispute that Holland is the best GM in the league, hands down. He could even be in the conversation for being one of the top five general managers in North American pro sports. Stan Bowman's winning percentage suffers from small sample size syndrom, him being Chicago's general manager for only one season. A season where most of his top stars were on entry level deals, at that.

All those fancy numbers and percentages basically boils down to the fact that Doug Wilson's Sharks have averaged 108 points per season. The only season where they dipped below triple digits was the 2005-2006 season with 99 points. Only the Detroit Red Wings can also claim that amount of success post-lockout, with them not once dropping below 100 points. The Sharks have made the playoffs all six years, and the lowest seed the Sharks have been was the fifth seed in the West. They have also won the Conference twice, and the President's Trophy once.

Numbers don't mean much to some people. Some would rather rely on their eyes and observations, and what their observations tell them is that Doug Wilson not only has failed to bring a championship to San Jose, but he has failed to even get the team to the Stanley Cup Finals!

To those people, I counter with two general managers (albeit from other sports) whose respective teams have made their sports' championships this past decade: Brian Sabean and Al Davis. For those of you not quite up on football or baseball, here's a quick Spark Notes lesson about those two: one has an unhealthy obsession with overpaying gritty gamers, the other might be part zombie, and both of them are the bane of their teams' fans' existences.

I'd also like to direct those people's attention to the general manager of the last true dynasty in the NHL. He was the general manager of a team so good, that the Great One could be (and was) traded away and they'd still win a Stanley Cup. That man is Glen Sather. That's right, the Glen Sather of the infamous Chris Drury, Wade Redden, and Scott Gomez trifecta. He of the, "You're paying Derek Boogaard WHAT?" fame.

To be fair to Glen Sather, his success came when the salary cap was just a figmant of a young Gary Bettman's imagination, and the money involved in a contract meant much less than it does today, where a player's value to a team is largely defined by how fair his contract is. And he was able to unload Scott Gomez on the Montreal Canadians for an amazingly decent return. But still - Derek Boogaard for $1.625M per year for four years. The guy has two career goals. Amazing.

Doug Wilson has his own contract faults - I look at Niclas Wallin's $2.5M and NTC and cringe - but what makes him different from other GMs who overpay mediocre players is the term. Just look at the Sharks' contracts - not one player is signed past 2013-14. In four years, none of the contracts currently on the Sharks will exist anymore. And that is a great thing.

Yes, it is in vogue for a GM to sign players to ridiculously long-term deals to lower the cap hit. But really, that's a long-term solution to a short-term problem. Just imagine five years into the future - none of those recently-signed long-term deals are done. Not Hossa's, not Campbell's, not Zetterberg's, not Pronger's... the list can go on. The teams that they are currently on will be radically different from how they are today. Five years ago, Jonathan Cheechoo was a third liner on the Sharks with scoring pop and Joe Thornton was the captain for the Bruins. Five years ago there was a lockout, and the Penguins, Capitals, and Blackhawks were the laughingstocks of the league. Well, the Blackhawks still play the part of laughingstocks, although because of an entirely different cap-related matter.

My point is a team can change dramatically in the space of three, even two years. Those dozen year contracts may look good now, but what if the player becomes a Jonathan Cheechoo? That team is, pardon my French, screwed.

Back to Doug Wilson - he insists on signing players to a max four or five year contract, with four years being the preferred amount of time. It doesn't lower the cap hit, but it gives him greater roster flexibility in the long term. If a player doesn't play up to expectations, it is much easier to either wait out for only one or two years (like with Kent Huskins) or trade away that contract (like with Jonathan Cheechoo).

And that brings us to Doug Wilson's greatest skill - the art of the trade. I can and will say confidently that Doug Wilson is the best general manager at trades in the NHL, particularly of the blockbuster variety. Observe:

Any of those trades would earn a general manager some serious trade cred. It would probably also make other GMs wary of trading with them. And yet, Doug Wilson managed to pull off all three. True, there were extenuating circumstances that led to those trades taking place (like Heatley demanding a trade with a NMC, the new Lightning owners being tight-fisted, and the Boston GM being stupid), but that Doug Wilson was able to take advantage of all of them is impressive.

Doug Wilson has to be impressive on the trade front because, let's face it, free agents don't come to San Jose. Probably the top two free agents the Sharks have attracted the past few years were Rob Blake and Manny Malhotra, one being 40 years old and the other using the Sharks to position himself for his next contract (a Brian Campbell without the fake family reasons, if you will). I might even count Niklas Hjalmarsson among them, because he did sign an offer sheet with the Sharks, even if he never ultimately became a Shark.

The lack of big name free agents can be attributed to Doug Wilson and his policy of never signing anyone on July 1 (except for goalies whose names rhyme with Shmantero Shmiittymaki). He doesn't give out big contracts, and he doesn't overpay UFAs not in the Sharks organization. Yes, it makes the Sharks lose out on guys like Zybenek Michalek and Paul Martin, but it also prevents us from getting the Brian Campbells and Wade Reddens of the world. Or even the Derek Boogaards. And, quite frankly, I'm okay with that. Like with his refusal to give out those insanely long contracts, it gives him more room to maneuver in the present and the future.

His strict adherance to the rules is well-known; he refuses to so much as mention another team's player on the record in case it might be considered tampering (comparisons of Kent Huskins to Rob Scuderi not withstanding). He doesn't talk about trade talks or contract negotiations, preferring to play it close to the chest. And while that might annoy us as fans, it makes sense - we all saw how the publicizing of Dany Heatley's trade demand played out for Ottawa and Bryan Murray. The jury is out over which party released the demand to the press, but I do not see the same situation playing out if it was Doug Wilson faced with a trade demand.

There are other facets to why he is such a great GM - the way he dealt with Chicago this summer with both facilitating a trade and offer-sheeting Niklas Hjalmarsson is something that I can gush over for hours - but it really boils down to four points: the constant improvement of an already good team, the smaller and maneuverable contracts, the superpower of absolutely fleecing teams via trade, and the unwavering integrity and adherance to the rules. There has not been a season where Wilson did not identify and attempt to solve a problem to the best of his ability, whether it be with Joe Thornton, Brian Campbell, Dany Boyle, or Dany Heatley. There was not been a contract given out that has crippled the team. There have been underwhelming trades, yes, but outside of the Christian Ehrhoff salary dump, there hasn't been one trade where I think, "Man, Doug Wilson got fleeced!"

Doug Wilson is one of the best general managers in the NHL. Sometimes Sharks fans forget that.