A look at what Jamal Mayers brings to San Jose

Share All sharing options for: A look at what Jamal Mayers brings to San Jose

As everyone is fully aware of at this point, Jamal Mayers inked a one-year deal with San Jose today. The contract will pay him $600,000, which is by no means a burden on the Sharks remaining cap space, and slots him into a plugger role with the likes of Scott Nichol on the Sharks fourth line next season.

Mayers had twelve goals back in 07-08 with the St. Louis Blues, and while I don't think that should be an expectation for the Sharks fanbase heading into the year, he's had some decent scoring pop throughout his career and could improve on the three goals he scored last season. If he doesn't it probably won't matter considering that's not what he's being brought in to do, but his shooting percentages were very low compared to his career average. I'm going to say he scores six goals next season due to nothing other than a gut feeling and a glass of Black Label. He'll probably score two.

Mayers supposedly can kill some penalties too, which is a nice bonus for a guy on the bottom line. He led all Blues forwards in shorthanded time during 07-08 (3:36 per game), but saw his totals dwindled under the always oh so effervescent Ron Wilson in Toronto (1:46 in 08-09, 0:51 in 09-10). Whether that means he forgot how to kill penalties, was mismanaged by Wilson, or just got older and lost a step will be answered this season I guess, but here's a quick synopsis based on his last three years-- he's pretty freaking terrible at it. Maybe McLellan taps him every once in awhile if he's hurting for bodies out there, but around 30 seconds a night is probably tops for what one can reasonably expect considering his numbers. He's not going to provide much value in this department, if any at all.

Mayers can also fight. Whatever. It's always fun to watch and all, but in a day and age where the instigator penalty exists, I really don't know how much value this aspect of his game actually brings to the table. At any rate, you can be rest assured that if Steve Ott takes a run at Marleau and knocks him on his keister Mayers will be there to fight some other troglodyte and suddenly everything will be all squared away.

His qualcomp numbers are basically what you would expect from a fourth line plugger-- he saw the soft minutes on a night by night basis, but didn't get outscored compared to the rest of his teammates last season which is a somewhat of a plus. There's not a lot here that screams out at me as Mayers being a defensive stalwart , but here are the relevant advanced stats I always like to put into nifty tables:

God forbid he sees any type of tough minutes-- he led all Blues forward in quality of competition during 07-08 and got murdered. In Toronto and Calgary he was plugged into a role more suiting of him (i.e. going up against the softies), and while he was still in the minus, he gave up less goals on the ice when compared to his teammates. Taking his quality of competition numbers into consideration though, it's hard to say that giving up less goals than his teammates is really that big of an accomplishment.

Again, he's pretty horrendous on the kill. Second to last in St. Louis in terms of goals against, and equally as bad in Toronto. Not the guy I was talking about last week when I looked at the Sharks need for a penalty killing forward this offseason.

For those keeping count, that is 45 taken and 16 drawn over the last three seasons. Not exactly what you want to see out of a fourth liner seeing limited minutes against soft competition.

There is also the fact that Darryl Sutter traded for him. A good back of the envelope analysis I like to use when looking at a player is this-- if Sutter traded for him, you probably don't want the guy. There's been way too many insane signings and transactions up north in Calgary lately, so that should raise a red flag for anyone who is planning on picking up a Mayers jersey before the season begins. 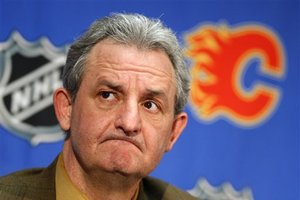 In all seriousness though, Mayers doesn't change much for the Sharks. He's really not that good of a player (read: he really doesn't have much value at all) , and I'd much prefer to see more of Frazer McLaren on the fourth line considering his performance last year in San Jose, but you get what you pay for, and the Sharks are paying peanuts for his services. It's another roster spot that could have been filled by a young guy, but hey, maybe upper management knows something I don't about how those guys are developing (read: they definitely have a better grasp on prospects than I do).

Either way, not a big fan of this signing. Mayers doesn't bring much to the table outside of anything the organization already has in the pipeline, and I don't expect him to make any noticeable contribution to the team's quest to win a Stanley Cup. At best, Doug Wilson broke even today.

The original Fanshot breaking this story can be found here.