When I'm fifty years old, I'm pretty sure I'll be more excited for my colonoscopy than preseason games. Especially ones on the radio. It's always a ho-hum event, and without Jamie Baker or Dan Rusanowsky streaming through the computer, there's not much here to get pumped about. The Ducks announcers will be focusing on Anaheim as they should be, which kind of leaves Sharks fans in a position where checking out the boxscore after the tilt is probably just as productive.

That being said, I'll probably have it on while I throw down my Tatooine-based Dark Side deck against my buddy in a nice game of Star Wars CCG.

At any rate, Pollak will be at the Honda Center tonight, which means Working The Corners will be the place to head to around 10:00 PM to get some solid intel. Logan Couture was banged up at the Teal & White game yesterday after a clean hit by Tommy Wingels, and won't be joining the team against the Ducks. According to WTC, here are the players making the trip down:

That blueline is all sorts of lovely.

I'm assuming Clowe-Thornton-Gooch receive top line minutes, and everyone else gets kind of tossed around throughout the game to give McLellan some looks at what and what doesn't work.

In other Sharks news, Arturs Irbe will be inducted somewhere I think: 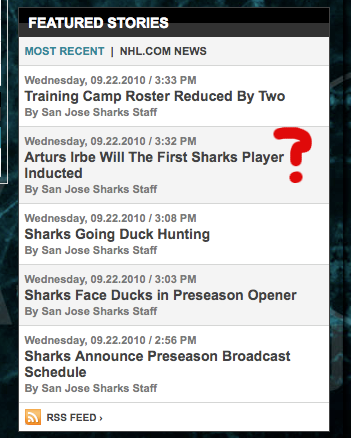 I don't know where Irbe "will" something, but it's probably going to be awesome.

In all seriousness, Irbe will be inducted into the San Jose Sports Hall of Fame, the first San Jose Sharks player to ever receive these honors. It's well-deserving considering his role as one of the key figures on the team that upset the Detroit Red Wings in the 1994 playoffs. Congratulations sir.