At this point in the season, with the Sharks 11th in the Conference and in the midst of a five game losing streak, teams like Edmonton tend to scare you. Forget the fact that they're a bottom dweller destined for a lottery pick, 1-7-2 in their last ten games, and have amassed a mere thirteen wins this season.

Think of all that team speed! Taylor Hall with a motor-a-runnin', cruising down the left wing only to cut across the middle to the backhand while Dustin Penner rumbles to the net looking for scraps. Or the brashness of Linus Omark, he of dazzling shootout moves that delight the masses and send old time hockey buffs into cardiac arrest. And don't you dare your turn your back on Magnus Pääjärvi-Svensson, because all the umlauts means this kid is more metal than the offspring of Angela Gossow and Ozzy Osbourne.

Steve MacIntyre? Pretty sure he handled Kimbo Slice and Matt Foley in a boiler room brawl at some point in his life. Shawn Horcoff? May be injured for the next month, but his inspirational skills from the press box has been empirically proven to be worth at least four standings points a year. Kurtis Foster? A defensive stalwart of the highest degree, perennial Norris candidate, able to shut down the top line with one skate laced and an eye on that blonde in the third row.

Think of all that goaltending! Nikolai Khabibulin, Stanley cup winner extraordinaire, owner of a save percentage just shy of that monumental .900 mark. Devan Dubnyk, a man who hails from Saskatchewan but sounds like an embittered Russian novelist who writes with Dostoevsky prose (and kills scoring opportunities with the brutality of an ex-KGB agent).

Ladislav Smid may not have a goal this year, but he's due. Andrew Cogliano may be a disappointment this year, but who can deny those blades of fury. Tom Renney may be famous for his constant line changes, but if you cover all your bases something will eventually stick.

And then you have Tom Gilbert, who has that whole "Joe Thornton awkward teenage years" look down pat. 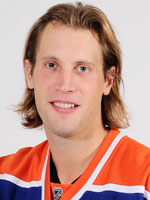 Anybody got some POGS they wanna trade?

Don't let your guard down tonight folks-- this Edmonton club might just be the toughest team San Jose will face all season.

Prediction: Sharks lose 4-1. Goals by Pääjärvi (who smashes his stick like Pete Townshend in celebration), Horcoff (how does he do it!), Ladislav Smid (he's off the Smide!), and Foster (who finishes a +42 in CORSI). Gibert notches four assists and someone still complains that he doesn't shoot the puck enough.