Is Antti Niemi the only reliable option in the Sharks goaltending tandem for the rest of the season?

Share All sharing options for: Is Antti Niemi the only reliable option in the Sharks goaltending tandem for the rest of the season?

There's been a fair amount of discussion this season over the merits of both Antti Niemi and Antero Niittymaki. Along with our daily coverage of the team, two pieces published this season by Fear The Fin took a look at the situation from separate angles.

The first, published on December 7th, looked at Niemi's run from late November to early December in the midst of what was a confusing time for those following the team-- Niemi was being given the bulk of the team's starts despite a string of bad outings in the goals against category, leading many to believe that McLellan was making the wrong decision in playing Niemi more than Niittymaki. However, as we saw by going to the game tape, it was hard to fault Niemi for many of the goals he had given up. The issue instead was defensive responsibility:

This five game period has seen Niemi post an .896 SV%, making 112 saves on 125 shots. Removing the events where he was left hung out to dry ("No Chance" in our table), Niemi makes 112 saves on 121 shots, good for a .925 SV%. In other words, if we throw out all the plays where he was absolutely abandoned by his defense, it seems as if this five game stretch validates McLellan's decision to give Niemi the reigns. He has been quite good. He has deserved his playing time.

Another interesting note-- Niemi's rebound control is cited as a huge detriment to his success as a goaltender, and make no mistake, I obviously view this as a severe weakness as well. It's an ugly side to his game and one that has hurt the Sharks before. But to say that this has directly resulted in pucks ending up in the back of San Jose's net during Niemi's last five starts is ludicrous. Only one goal against came off of a rebound (Montreal's third goal)-- that goal was solely due to the errors of Douglas Murray and Justin Braun failing to pick up their assignment, and not due to an egregious and juicy rebound kicked out into the slot.

>> "Antti Niemi's improvement a good sign for the Sharks"

The second, published on December 21st looked at how the team has performed in front of each goaltender. San Jose had performed wildly better in front of Niittymaki in every conceivable statistic-- goals for, goals against shots for, shots against, penalty differential, you name it, and it was likely there. Goaltending quality of competition was also put under the microscope in an attempt to analyze which goaltender was seeing the more difficult opponents during their starts:

Which isn't to say confidence, heart, and grit, The Holiest of Trinities in The Broadcaster's Bible, aren't present-- they most definitely are, effecting games in ways that are hard to pinpoint. That raw human emotion is an asset that should never be discarded when looking at a hockey team or your love life. It's important, just like a good shift from your fourth line or a wink from that girl across the bar is important. They're real, they exist, they affect situations. But they are far from the end all be all of what a win is comprised of.

Which is why it's hard for me to definitively state that the team has more confidence in Niittymaki as a goaltender based on their performance in front of him this season. I think of it as a rich Christmas stew that has cooked in the Crock Pot for an entire day-- rebound control is the beef, positioning is the potato, puck control is the celery, a big save is the broth. The case can be made that San Jose's totals are due to Niittymaki's ability to manage the pace of the game better than Niemi by deflecting shots to the corners and gobbling up rebounds in his glove and chest, ensuring that one of the League's best faceoff teams gets an opportunity to gain possession. Instead of the entire team being forced to collapse into the slot to clear rebounds they can take more chances on the breakout and push the play up the ice. Does that inspire more confidence in their ability to win, directly correlating with their better play in front of Niittymaki? Maybe. But I think this is probably more of a case of X's and O's (and some natural fluctation in team performance) rather than the gooey stuff between the ears and nose.

Today we take another look at the goaltending tandem. The focus? Even strength save percentage. Or, more specifically, how the penalty kill has drastically effected one goaltender's numbers.

As it stands right now, Antti Niemi has clearly taken over the role as San Jose's number one goaltender for the time being. His stat line in January has been sparkling, and with Niittymaki unable to get minutes (and putting up some porous numbers when he does), McLellan has begun to ride Niemi more and more as the season has progressed.

It's a decision that's rooted in a whole lot of reason, as the season long SV% trends will tell you: 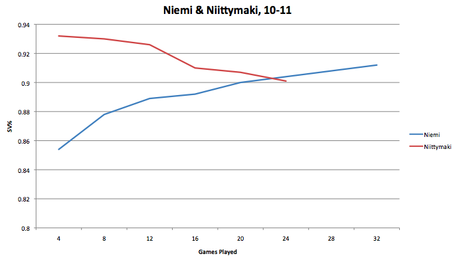 This fact became clear on the weekend of January 8th, when McLellan started Niemi in back to back games against the Nashville Predators and Anaheim Ducks. It was the first time a goaltender had started back to back games all season long, and that decision sent a clear message to the Finns-- Niemi is the guy right now, and unless the fortunes for either goaltender change, he will continue to be the guy for the rest of the year.

However, taking a look at the entire body of work both goaltenders have produced this season, the difference in their SV% numbers comes down to one aspect of the goaltending game that is rooted in a whole lot of statistical variance.

Heading into Saturday's game against the Minnesota Wild, the difference between Niittymaki and Niemi could not be more glaring. Niemi's shorthanded save percentage lies at an extremely respectable .908 SV% while Niittymaki's is a dreadful .805 SV%. As Behind The Net has shown however, shorthanded SV% is an aspect of the position that comes with a lot of fuzz in the numbers-- low shot totals, and the inherent dangers of playing a man down, makes reading too much into these statistics a risky affair. It's entirely possible that Niemi has a skill set better suited to playing shorthanded than Niittymaki, but qualitative data this season (and quantitative data over the history of the NHL) makes it hard to reach anything resembling a strong conclusion in that regard.

Under the assumption that even strength save percentage is the best known metric for analyzing a goaltender's ability to stop pucks, a quick perusal of both goaltender's entire body of work this season tells a story that may be surprising considering the recent play of the tandem. Niemi and Niittymaki are deadlocked in this area, boasting identical .916 SV%'s. A lot of that has to do with the graph we looked at above-- Niemi has clearly improved while Niittymaki has clearly regressed-- but the underlying numbers behind their seasons show a pair of goaltenders who have struggled and flourished at coinciding times, riding the waves that come along with any 82 game NHL season.

Niemi's .942 SV% in January (!!!) has been a welcome addition to the club but, in my opinion, is an unsustainable feat considering what we've seen from him throughout his recent career-- the same goes for Niittymaki, whose stints before San Jose saw him develop into a reliable goaltender that thrives in a competitive situation but is prone to stretches where his play delves into the murky netherworld of soft goals.

In essence, I believe it's too early to give up on Niittymaki as a goaltender who will provide quality starts for San Jose, as well as the fact that it's too early to crown Niemi as the sole solution to San Jose's situation in net. Both goalies have given the team gut-wrenching and phenomenal stretches almost concurrently, a sign that another turn of events may be in place somewhere down the line. It's definitely possible that Niemi remains the go-to guy for the rest of the Sharks season. And it's definitely possible that Niittymaki never reclaims his role as the Sharks primary starter. But what is almost certain is that Niemi won't be as lights out as he has been lately, and Niittymaki won't be as dreadful as he has been either. We've seen too much good and too much bad from both to assume that their current play will remain where it stands today.

There's no doubt Niemi has been the better of the two goaltenders by a (very) long shot over the last month. His work with San Jose's goaltending staff has produced a multitude of improvements, specifically with his glove hand, lateral movement, athleticism, and rebound control. Last night's showcase in Vancouver, as well as the fact that Niittymaki has been placed on the injured reserve with an undisclosed lower body injury, sets the stage for what will be the Neemo show over the next two weeks. And right now there's no man that looks to be more suited for the job lest San Jose makes an extremely bold play and grabs former goaltender Evgeni Nabokov off waivers, or highly-touted prospect Al Stalock comes into San Jose and sets the city ablaze (provided an injury he is dealing with does not prevent that call up).

Ride Niemi while he's red hot. Sit Niittymaki while he struggles, ease him back into health during a time when his services aren't required in the midst of Niemi's stellar play. And take a good hard look at Stalock while he potentially is up with the big club.

But don't forget the reason why San Jose decided to go with a tandem this season. It's purpose is to provide a backup plan when times get rough, to ease the burden of one goaltender's struggles by sheltering him and the team's record from being at the mercy of the glove and pads of a single man in the crease.

Because as we've seen already, fortunes can change in the blink of an eye.