With the 2011-2012 season set to begin on October 8th, Fear The Fin will be partying with Miss Cleo and previewing the Sharks roster in the weeks leading up to opening night. Today we continue with what is expected to be the Sharks third paring: Colin White and Jason Demers. 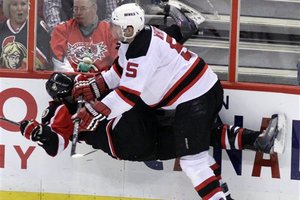 After being bought out by the New Jersey Devils, Sharks General Manager Doug Wilson quickly snapped up the defensively oriented Colin White for a mere $1.0 MM per year this offseason, identifying his ability to play tough minutes and nasty physical play as his strongest suits as a player. Coming in at 6'4 and 235 pounds at 33 years of age, White is a defenseman who has seen it all throughout his career and should mesh well as a left handed brick wall playing alongside the quicker and more agile Demers [read our full review of Colin White's signing here].

Despite being the victim of a buyout, don't let this offseason cast any doubt on how effective White can be in his role-- playing with the Devils for his entire career, White has transitioned from the clutch and grab early aughts into the new NHL rather seamlessly. Over the course of the last three seasons with the Devils, White's quality of competition, defensive zone starts, shorthanded TOI, and shorthanded goals against numbers have been tops on the team-- coupled with a respectable +/- and relative CORSI that fluttered around the middle of the pack and reflected the hard assignments he was given, White's ability to shutdown opposing forwards on the top pairing in New Jersey indicate that a third pairing role with San Jose is well within his range of capabilities. His shorthanded ice time capabilities are also of immense benefit to the team-- along with reducing the ice time of players like Dan Boyle, White's knack for killing penalties should help improve a unit that war ranked 24th in the NHL last season.

The pairing of White and Demers is essentially a second pairing unit on many teams in the NHL, and is truly a testament to the defensive depth the Sharks have heading into the year. It's new territory for Sharks fans to be certain, as the blueline was a glaring weakness of the team in previous playoff runs, but something that should cease to be an issue in 2011-2012.

The biggest question for Colin White heading into the 2011-2012 campaign is whether or not he can continue to keep up as a 34 year old defenseman in a much more physical and competitive Western Conference. With his career nearing the age where players see a drop in foot speed and overall effectiveness, a big and slower defenseman such as White can be exposed on nights against quicker teams. We don't foresee this to be a big issue for him, especially since he will be playing on the third pairing, but it is something to keep an eye out for as the season progresses. 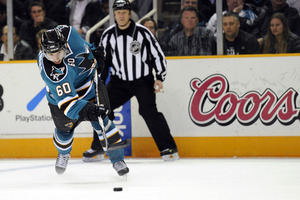 Coming off a strong sophomore season with the Sharks, Jason Demers is a sterling example of San Jose's ability to find excellent value late in the NHL Entry Draft. Drafted in the seventh round of the 2008 draft, Demers' progression from an offensive defenseman who had difficulty reading the play defensively into a two-way defenseman that is able to play against tougher competition is something that was of immense benefit to San Jose last year. By adding that missing defensive component to his game, Demers finished last season first on the team in +/- and finished first in relative CORSI amongst all blueliners. He did this while seeing the second highest defensive zone start percentage and fourth highest quality of competition, proving that his ability to push the play in the right direction wasn't just a case of easy minutes and Downy soft situations.

In many ways Demers is already capable of handling a top four role-- his skating ability is butter smooth, he carries the puck out of his own zone extremely well, his shot is accurate and middle of the range in terms of power, and his work in his own zone is more than capable. Furthermore, for the majority of last season, Demers played with defensive specialist Marc-Edouard Vlasic on the second pairing. But with the amount of defensive depth San Jose acquired this offseason when they added Brent Burns, Colin White, and Jim Vandermeer, Demers will be counted on to mop up against easier minutes, something that he should be able to handle alongside Colin White who, as we just examined, is more than capable of handling those duties as well. That being said, when the inevitable injuries occur throughout the roster, expect Demers to be given first crack at sliding up into a more minutes heavy role.

The biggest question for Demers heading into the 2011-2012 season will be whether or not he can continue to progress in the offensive end of the ice. Although a 24 point campaign is acceptable for a 23 year old defenseman, playing alongside the offensively challenged Colin White against easy competition should allow Demers to increase his point totals and become the go-to weapon on that pairing. With a contract that will pay him $1.2 MM per year over the next two seasons, Demers' should provide great value for the team-- if he can put up more points than he did last year, he could become one of the better valued contracts on the entire roster.