Well, the season has already started. So this isn't technically a preview. But with the 2011-2012 season already upon us, we sit down to today to round out our annual preview series and cover the most difficult position in all of hockey to truly understand-- goaltending. Antti Niemi, Antero Niittymaki, and Thomas Greiss are covered today. 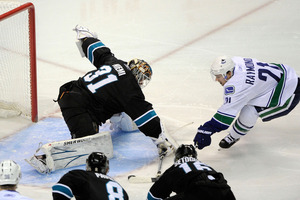 After being signed by the Sharks late in the summer of 2010, Niemi came into San Jose with a lot of questions surrounding his game. The first question was whether or not he was as good of a goaltender as he displayed during the 2010 Western Conference Finals-- Niemi was brilliant in that series, but finished the postseason with a relatively average .910 SV% with the Stanley Cup champion Chicago Blackhawks. The second question was whether he was a product of a stellar Hawks blueline, which was able to clean up the rebounds Niemi was prone to kick out into the middle of the ice.

Niemi did a lot to answer those questions in the second half of last season, starting 34 consecutive games down the stretch for the Sharks and putting in a performance that earned him the Sharks Foundation Player of The Year Award and a nod as Fear The Fin's illustrious second half Team MVP. Consider this-- after the Sharks broke out of their six game losing streak in mid-January, Niemi posted a .928 SV% and went 26-5-4. To say he was the catalyst for the team's turnaround is almost disingenuous, as Niemi was hands down the best player on the ice on many nights.

The postseason was a different story unfortunately, as Niemi struggled against the Los Angeles Kings in the first round. He performed much better against the Red Wings, nearly stealing game six in Detroit where he made 42 stops in a breathtaking performance, but struggled again against Vancouver. Sample size is clearly an issue here, as well as the fact that the Sharks play in front of him was mercurial throughout the postseason, but a .896 SV% and a 3.22 GAA in April and May was clearly not what San Jose expected out of him when they gave him a four year contract extension worth $15.2 MM in early March.

Essentially, Niemi is a goaltender who has been fairly inconsistent throughout his career-- looking at his 2010-2011 season as a whole, you had early season struggles, followed up by a period of utter dominance, followed up with more struggles. Since coming to the Sharks Niemi has vastly improved his glove hand and ability to control rebounds, a testament to his work with the Sharks goaltending staff during the year-- continuing to work on those things will be paramount this season for the Finnish netminder as he attempts to recreate the magic he displayed during the second half.

The biggest question for Niemi heading into the 2011-2012 season is whether he can stay consistent throughout the season. Playing in front of a vastly improved blueline will definitely help, as will his work with the Sharks goaltending coaches. The jury is still out on Niemi as an elite NHL goaltender, but as his second half last year will attest to, Niemi has the ability to ratchet up his play under pressure and provide excellent netminding for extended periods of time. Expect him to log a lot of minutes this year in between the pipes, as Sharks Coach Todd McLellan has consistently stated he feels Niemi is at his best when he is receiving a lot of ice time. 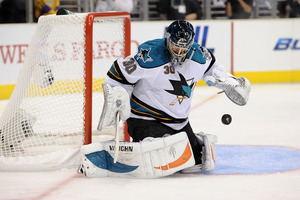 Niittymaki's season last year ran in an inverse way to Niemi's-- a great start to the season fell off as the season progressed, and an injury sustained in the middle of the year kept him on the shelf for the vast majority of 2011. Complications with a lower body injury this offseason will lead Niittymaki to rehab for the first three months of the year, giving goaltender Thomas Greiss an opportunity to try and lock down a full-time role with the team.

A goaltender who also has the tendency to run hot and cold throughout the course of a season, Niittymaki is a stereotypical tandem netminder-- not quite good enough to shoulder 65 games played throughout a season, but more than able to play in back to backs and take the reigns when his partner is struggling in net. Good reflexes and strong positional play are a hallmark of Niittymaki's game; he challenges shooters more than Niemi, but lacks the strength down low with his pads that Niemi possesses.

The biggest question for Niittymaki heading into 2011-2012 is twofold. It remains to be seen how Niittymaki's injury will effect his play when he returns to the ice, as lingering issues can prove to be an issue for goaltenders. Furthermore, with Thomas Greiss making waves during the preseason and showing that he is able to handle NHL duty (as he was two years ago), Niittymaki's future with San Jose depends on how well Greiss plays and how quickly Al Stalock progresses in Worcester. 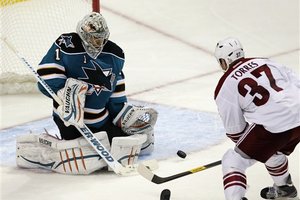 A favorite of Fear The Fin and our readers, Thomas Greiss is an extremely exciting goaltender to watch on every single night. Aggressive to a fault, Greiss plays the game with a kind of controlled chaos that results in some magnificent saves to go along with some frantic scrambles around the crease. He's quick from post to post and extremely agile as well, constantly challenging shooters at the top of his crease. This can leave him open to some backdoor plays or swift passing in the offensive zone, where Greiss' aggressiveness gets the best of him, but by and large his agility in net should be considered a plus.

During the Sharks home opener against the Coyotes, Phoenix Head Coach Dave Tippet evidently told his shooters to shoot high glove side, because Greiss was flashing leather all night. Two years ago when he played in San Jose I didn't see this as a primary issue for him, but as the season progresses, see if other opposing teams try and expose Greiss' glove hand when he gets the start.

The biggest question for Greiss during 11-12 will be whether or not he can lock down a full-time role with the team during the season. We're predicting he makes Niittymaki as the odd man out this year, as the Sharks vastly improved defensive corps should complement Greiss' aggressive style perfectly. If he struggles however, expect him to head to Worcester where he will platoon with a rehabbing Al Stalock.

Overall the Sharks have three legitimate NHL goaltenders at their disposal this season. Niemi is a lock to be the primary netminder throughout the year, but Niittymaki and Greiss are more than capable of handling backup duties and chipping in when called upon. Along with Al Stalock in Worcester, the Sharks vaunted goaltending depth will be a huge benefit to the team this year as well as into the future.