Share All sharing options for: TiqIQ Partners With Fear The Fin to Give Readers A Chance To Win Free Sharks Tickets 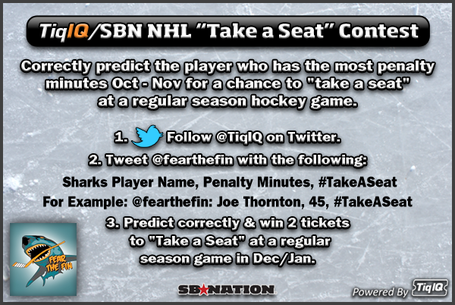 TiqIQ is a company that helps you to find the best tickets available for professional sporting events. The site aggregates tickets available online from major vendors like Stub Hub, Ticket Master, and EBay, allowing their customers to compare the price of tickets and see the trends in pricing that is occurring over past week and month.

Along with other SB Nation hockey sites, Fear The Fin has recently been given an opportunity to give away free tickets to a Sharks game later this year. The terms of the contest are simple-- guess which Sharks player will lead the team in penalty minutes at the end of November and how many penalty minutes that player will have. This includes PIM's already accrued. Whichever reader guesses correctly will win a pair of tickets to a Sharks home game in December or January.

In order to enter you will need a Twitter account. I understand not all of you have an account, and when we've run contests like this in the past, that has been a point you have raised. My suggestion to you would be to sign up for Twitter (it takes five minutes) and take advantage of the opportunity because there's no way around it.

1. Follow @TiqIQ on Twitter. This is important-- if you aren't following them, they can't track your entry.

2. Send a tweet to @fearthefin that has the players name, # of PIM's he will have at the end of November, and the hashtag #TakeASeat. Here is a picture showing the format of the tweet:

The last day to enter is on October 31s, but you can get started now-- users can guess as many times as they want throughout the course of the month. Obviously this has some constraints (I don't want a list of every player on the team with PIM's ranging from 2 to 200 flooding my inbox today), but three to five guesses a day should be fine and ensure that you have a good chance of winning. The contest isn't a "Price Is Right" format-- you have to nail it exactly in order to win tickets. So guess as often as you can without inviting the wrath of my clumsy keyboard fingers.

In the event of a tie, the person who first guessed correctly in the timeline will win.