On Saturday night, the Worcester Sharks hosted the Albany Devils in their home opener at the DCU Center and sent the sellout crowd of 7,239 home happy with a 6-1 victory, improving their record to 2-0-0-0.

Benn Ferriero, Matt Irwin, Ben Guite, James Livingston and Mike Connolly all scored for the Sharks, and goalie Tyson Sexsmith won consecutive games for the first time in his Worcester career by stopping 15-of-16 shots for his second win of the season.  In addition, Ferriero {1-1-2}, Irwin {1-1-2}, Livingston {2-0-2}, Connolly {1-2-3}, Mike Moore {0-2-2} and John McCarthy {0-3-3} all had multi-point games for the Sharks.

Ferriero scored his second goal of the season at 6:07 of the first period to give the Sharks an early 1-0 lead, extending his goal streak to two games.  With the puck at center ice, Sharks defenseman Nick Petrecki dumped the puck into the Devils zone as Connolly gave chase.  Engaging in a battle with Devils defenseman Matt Taormina for the loose puck on the far goal line, Connolly quickly backhanded the puck away from Taormina and right to Ferriero, who quickly snapped a one-timer shot from outside the right face-off circle along the far wall that beat Devils goalie Jeff Frazee through the five-hole for the goal.

Later in the period, Irwin scored his first goal of the season at 8:52 with the Sharks on the power play to extend the lead to 2-0.  With Devils captain Stephen Gionta in the penalty box for tripping, the Sharks were able to win the ensuing face-off inside the Devils zone and with traffic in front of Frazee, Irwin blasted a shot from the top of the point {just inside the blue line} that beat Frazee blocker side for the goal, which held up as the game winner.

After failing to register a shot on Sexsmith for the first 15 minutes of the game, Vladimir Zharkov scored the Devils' lone goal on their second shot of the game at 15:39 to cut the Sharks lead to 2-1 heading into the first intermission.  After Sexsmith made the initial save on Gionta's shot from between the two face-off circles, the puck bounced off the stick of Petrecki, who was standing on top of the goalie crease.  With the puck loose at the side of the goalie crease and Sexsmith turned around {butt was facing the shooter}, Zharkov fired the loose puck through the legs of Sexsmith, who was tied up with defenseman Taylor Doherty in the crease, for the goal.

At 13:24 of the second period, Ben Guite scored his first goal of the season, his first as a Worcester Shark and 100th career AHL goal, with the Sharks on the power play to give the Sharks a 3-1 lead.  On the tail end of their power play opportunity, Guite won a face-off inside the Devils zone in the lower face-off circle and got the puck back to Sean Sullivan, who fired a shot on net from just outside the face-off circle.  Frazee stopped the shot with his blocker but the puck bounced right to Guite, who was crashing for a rebound, and from on top of the goalie crease, Guite put the puck between Frazee's legs for the goal.

Shortly after Guite's goal, fireworks erupted between the two teams at 14:51 after Devils forward Tim Sestito ran over Sharks rookie forward Curt Gogol along the boards inside the Devils zone.  Taking exception to the hit, Gogol got visor-to-visor with Sestito, which caused a scrum up with all 10 skaters.  Sharks forward Nathan Moon grabbed Devils defenseman, and former Sharks captain, Jay Leach from behind, causing Leach to go after Moon with forearms.  Gogol landed several shots on Sestito before being separated by the linesmen and Leach squared off with Petrecki, who landed haymaker after haymaker on Leach before both men fell to the ice.

Before fans were able to return to their seats for the third period, Livingston scored his first professional goal at 0:28 to give the Sharks a 4-1 lead.  With the puck behind Frazee's net, Livingston won the battle for the puck and passed it along the left sideboard out to Moore, who quickly fired a shot on net from the lower left side of the point.  Working himself back to the side of the net after making the pass, Livingston, who was untouched, corralled the rebound onto his stick and put the puck into the open net for the goal.

Just 1:17 later, Connolly scored his first professional goal at 1:45 with the Sharks on a power play to extend the lead to 5-1.  With Devils defenseman Alexander Urbom off for slashing, Ferriero won the ensuing face-off inside the Devils zone and got the puck back to Irwin.  Carrying the puck to the exact spot on the point where he scored from earlier, Irwin passed the puck up to Justin Braun, who from the right side board, ripped a shot on net from the point as Connolly screened Frazee in front.  The puck deflected off the stick of Connolly and into the net for the goal.

At 4:45, Sharks forward Cam MacIntyre dropped the gloves with Devils defenseman Matthew Corrente and Corrente was assessed an extra two minutes for unsportsmanlike conduct.  With the power play unit back on the ice and the puck inside the Devils zone, McCarthy skated into the left face-off circle and passed the puck to Livingston, who was positioned on the goal line at the side of the goalie crease.  With the puck on his stick, Livingston made a strong move by spinning around in front and stuffed the puck passed Frazee for the goal at 5:32.

Initially, there was confusion regarding Connolly's goal as it was thought that Livingston had scored the goal, which would have given him a natural hat-trick.  However, Livingston was not on the ice at the time of that goal, which stood as Connolly's.

For the game, the Sharks outshot the Devils 31-16, were 4-for-9 with the man advantage and 6-for-6 in penalty kills... The two teams combined for 103 penalty minutes with four 10-minute misconducts, five majors and 19 minors... Sharks defenseman Matt Pelech {Pel-ick} made his Worcester debut and registered seven penalty minutes... Moon was signed to an AHL Contract before the start of the game... Marek Viedensky {injury}, Jimmy Bonneau {injury} and Sena Acolatse were scratched for the Sharks.

As a special bonus, here is the fight between Petrecki and Leach.  I recorded the clip from the AHL Live broadcast using my Droid phone. 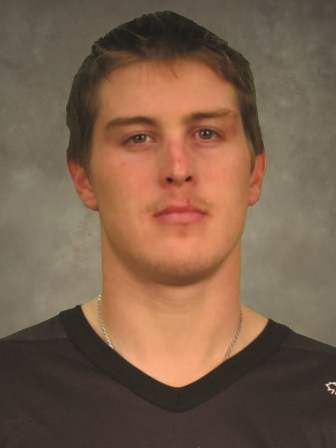 O'Connor, 24, was invited to Worcester's training camp last month and was assigned to the Stockton Thunder of the ECHL, where he has played one game this season.  O'Connor made his professional debut with the Reading Royals last season and registered one goal in six games to go along with seven penalty minutes.

O'Connor attended Providence College and as a senior, led the Friars with a career high 24 points on eight goals and 16 assists in 34 games played.  For his collegiate career {2007-11}, O'Connor appeared in 135 games and registered 62 points on 26 goals and 36 assists to go along with 102 penalty minutes.

Hunt also tweeted that if O'Connor appears in a game for Worcester, he will become the first Worcester Shark to ever wear number 40.

As a special treat, here is O'Connor in action last season scrapping with Yannick Tifu on March 19, 2011.  The video is courtesy of youtube user "prairiedog26"