With the 2011-2012 season set to begin on October 8th, Fear The Fin will be partying with Miss Cleo and previewing the Sharks roster in the weeks leading up to opening night. Today we continue with what is expected to be the Sharks first/second paring: Dan Boyle and Douglas Murray. 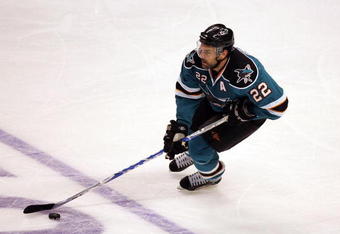 To truly understand how much Boyle has meant to this franchise over the course of his last three seasons in teal, one only has to look at his stellar point totals (50+ points three years running) and gargantuan ice time totals. After two years where Sharks defenseman Dan Boyle finished in the top five amongst all NHL defenseman in ice time per game (2nd in 10-11, 4th in 09-10), Boyle's 35 year old legs may be getting a bit of a reprieve next season with the addition of Brent Burns and Colin White to the Sharks backend. Boyle has never been one to complain about how heavily he's been leaned on to backstop the San Jose blueline of course, but these decreased ice time numbers should help improve his effectiveness at both even strength and the power play.

Boyle's smooth skating and ability to quarterback the power play are the two biggest skills he brings to the team, and those numbers are bared out in his underlying numbers. Last season he was far and away the most productive Sharks blueliner with the man advantage, putting up 4.29 points per 60 minutes and coming in with a 5v4 plus/minus of 8.57 per 60 minutes-- those numbers dwarfed anything the rest of the backend could put together, proving that his abilities on the power play are second to one, whether it be in San Jose or across the entire NHL. An ability to carry the puck out of his own end and enter the offensive zone with ease definitely helps in this regard, as Boyle is one of the smoothest skaters in the League and can casually make opposing forwards miss in the neutral zone in order to lead the Sharks attack up the ice. He's extremely aggressive in the offensive zone and able to pinch up the boards effectively-- this can occasionally result in a missed read, but by and large, Boyle's hockey IQ and physical abilities end up helping the team more than hurting them.

The only drawback to Boyle's game is his play in his own end-- while by no means a slouch in the defensive zone, Boyle is subject to being beat by opposing forwards from time to time. His high quality of competition numbers (1st in 10-11) and larger than life ice time can explain this away to some degree, but his relative CORSI numbers (5th in 10-11) could stand to improve this season. With that being said however, Boyle still finished in the black at 5v5 play last year in terms of +/- differential, proving that despite his minor defensive faults he is able to hurt opposing teams with regularity.

The biggest question for Boyle heading into 2011-2012 is twofold. The first is whether or not he will see less time in all defensive situations, specifically on the penalty kill where he was second on the team in terms of ice time per game. With the addition of Brent Burns and Colin White, along with the steady defensive play of Marc-Edouard Vlasic and a progressing Jason Demers, we expect this to be the case. The second is whether this hypothetical decreased responsibility will effect him in a negative way-- some players, who are used to seeing so much ice time over the course of a year, can develop a rhythm to their game that adapts to the ice time and shift totals.

We don't expect the second to be a major issue, as a reduction in total ice time for Boyle should make him a more productive player especially at 35 years of age. With Brent Burns helping to shoulder the load on the power play, and Colin White taking a lot of PK minutes away from San Jose's top offensive defenseman, expect Boyle to be a finely tuned machine in 2011-2012 who is more effective and shows more jump as the season progresses. 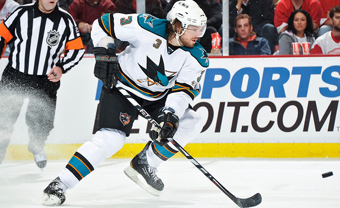 Douglas Murray might not be the most gifted skater on the team, but what he lacks in end to end skating ability he more than makes up for with his ability to close on forwards quickly and overpower players with his sheer body mass and physical play. It's hard to keep count how many times an opposing forward has tried to take a run at a seemingly exposed Murray only to watch Murray toss him aside like a bag of soft potatoes. One of Murray's favorite ploys is to hold the puck until the last second, and right when body contact is about to be made, dish the puck to a teammate and send the opposing forward to the ice.

In his last three seasons with the Sharks Murray has improved immensely in all facets of his defensive game-- each year he seems to get beat less and less out wide, improves his outlet passes, and makes fewer bad reads in the neutral zone. Many compare him to Red Wings defenseman Niklas Kronwall due to their penchant for dishing out highlight reel hits, but very rarely will you see Murray jump up in the neutral zone and take himself out of the play. As a former student at Cornell University it's no surprise that Murray utilizes his mental game just as much as his physical one when playing the game of hockey, but the huge strides he's made as a player over the course of his career with the Sharks is still something that is commendable. He's developed into a quality number four defenseman, a progression that is as pleasant as it surprising considering his game was at a bottom pairing level only two years ago.

Last season Murray played against the second highest quality of competition on the Sharks blueline, but received easy faceoff assignments where he saw the highest amount of offensive zone starts on the entire team. Furthermore, his relative CORSI numbers mirrored that of Dan Boyle, as Murray finished second to last on the team only behind Niclas Wallin. Although we've heaped a lot of praise on Murray in this article, it should be noted that he's not built for the top pairing role San Jose utilized him last year-- although his chemistry with Boyle is undeniable and should not be changed, look for Vlasic-Burns to take the tougher assignments this season and help put Boyle and Murray into more fortuitous situations in 11-12.

The biggest question for Murray heading into 2011-2012 is whether or not he can continue to progress in his game and further improve his defensive positioning. If Murray can shore up some of his errors and improve on where he stood last season, the Sharks will be mighty pleased with how well he's progressed since being picked in the 8th round of the 1999 NHL Entry Draft.