With the 2011-2012 season set to begin on October 8th, Fear The Fin will be partying with Miss Cleo and previewing the Sharks roster in the weeks leading up to opening night. Today we continue with what is expected to be the Sharks third line: Michal Handzus, Torrey Mitchell, and Tommy Wingels. 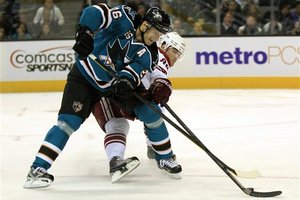 During his stay in Los Angeles Michal Handzus became renowned for his ability to kill penalties and provide sturdy defensive responsibility to the center position. His role in San Jose won't change in that regard, as Handzus will be expected to spearhead the Sharks previously woeful penalty kill alongside fellow third liner Torrey Mitchell.

Although Handzus is slower than Jonas Hill after getting hit in the neck with an elephant tranquilizer, what he lacks in skating ability he more than makes up for in positional play. Even though they play two entirely different positions, a decent comparable for Sharks fans unaware of Handzus' game is Marc-Edouard Vlasic. Both are players who rarely see themselves in the wrong area of the ice in the defensive end of the ice but make life a living hell for opposing forwards on a nightly basis. Playing the center position Handzus will definitely get more looks and be a more visible presence on the ice than Vlasic of course, but the basic idea is sound-- when you don't notice Handzus, it probably means he's doing a lot of the right things out there. And that applies to his advanced stats as well.

Over the last four seasons with Los Angeles Handzus has been given all of the tough situations on the team-- amongst Kings forwards he ranked in the top four in terms of quality of competition three out of the last four years, has been in the top two for defensive zone starts, led the team in shorthanded ice time per game, and been in the upper half of SH GAON/60 every year as well. Although these difficult assigments are something Handzus is clearly familiar with, San Jose's top six forward group is likely to play these tougher assignments. That might be for the best, because although Handzus played the toughs at 5v5, he also got fairly beat up as well-- his relative CORSI was amongst the worst on the team, and his GAON/60 at 5v5 saw him take some lumps as well.

With a third line role next season in San Jose however, expect Handzus to be more than capable of taking on a reduced role in regards to tough situations and playing well because of it. A ten goal thirty point season should be in the cards offensively, with his biggest contribution coming defensively, specifically on the penalty kill. 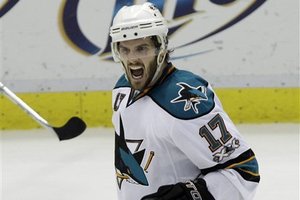 After two offseasons of rehabilitation for a broken leg sustained in 2008-2009, this offseason was the first where Mitchell was truly able to train in preparation for a regular season without dealing with any lingering issues. A constant speed threat on the third line, Mitchell will play on the top PK unit alongside the aforementioned Handzus and be tasked with providing some third line scoring pop to round out San Jose's depth.

Mitchell is coming off of a career year last season offensively, where he showed flashes of his rookie year potential playing with Joe Pavelski and Kyle Wellwood on San Jose's moderately famous "Hellacopter Line." Although his linemates won't be as skilled offensively this season, Mitchell's ability to play a sound defensive game and stretch teams with his speed is something that should be of great importance for a Sharks team that has questions about their depth this year. His advanced statistics bare out some underrated qualities commonly unobserved by Sharks fans-- the fact of the matter is, Mitchell is actually a fairly good defensive forward despite his small size. Finishing third on the team last year in terms of GAON/60 and relative CORSI, Mitchell is able to push the play in the right direction more often than not. This all came against the 8th best quality of competition and fifth best defensive zone starts on the team. Mitchell's not seeing high profile forwards out there of course, but he's not facing marshmallow soft throwaways either.

The biggest question for Mitchell heading into the 2011-2012 season won't be his offensive capabilities, as he should be good for at least 20 points with an opportunity to flirt with the 30 point mark. The biggest question will be whether he can stay healthy, not get bodied off the puck as much with a center that likes to work the cycle, and handle the increased responsibility on the PK. 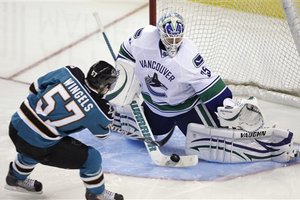 Not many people expected Tommy Wingels to make the Sharks roster out of camp, but after catching the eye of Sharks Head Coach Todd McLellan with three goals and solid hockey IQ, Wingels is making his mark on the team in a big way. A recent article by David Pollak of Working The Corners indicates that Wingels will be playing on the Sharks second line for the home opener after Havlat was ruled unable to play.

In other words, Wingels went from a long shot to make the roster to a second line winger playing on a Stanley Cup favorite alongside a Calder Trophy nominee and one of the League's best power forwards. And people still say the American Dream is dead...

Although Wingels' goal scoring ability was on full display during the preseason, the most attractive quality about him is his two-way play and knack for being in the right place at the right time. Similar to Sharks prospect Michael Sgarbossa and Joe Pavelski, Wingels isn't going to wow you like a Patrick Marleau or Martin Havlat will with their skating ability. What he will do however is put the puck in the right place, dig pucks out of the corners, and put himself in position to receive a pass or make a play. It's these qualities that should make him a good fit on the third line to start the season with Handzus and Mitchell. Furthermore, while not overtly physical like Ryane Clowe, Wingels can dish out hits as well and make an impact in the cycle game.

Time will tell whether or not Wingels can stick for all 82 games, but early returns look very good. He'll battle with Jamie McGinn and other roster players for a third line role this season, and look to cement his role on the team in the coming months.