With the 2011-2012 season set to begin on October 8th, Fear The Fin will be sippin'libations with Nostradamus and previewing the Sharks roster in the weeks leading up to opening night. Today we continue with what is expected to be the Sharks fourth line: Brad Winchester, Andrew Desjardins, and Andrew Murray. We also discuss Jamie McGinn, who looks bound for the healthy scratch role. 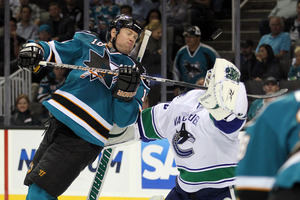 If there's one weakness on this San Jose Sharks team, it's bottom six wing strength. Of all problems, that's a good one to have, because it's easier to fix than say, being one elite defenseman short. Phew.

However, the Sharks entered camp with a select few players with experience to fill the wings on the lower lines. Frazer McLaren was hurt, Brandon Mashinter was too raw and Benn Ferriero was too small. That's why Brad Winchester got a call from Doug Wilson on the eve of Sharks camp.

Winchester has played for a few teams, most recently the Anaheim Ducks and the St. Louis Blues, where he enjoyed some mild success. However, he went unsigned through the offseason and took a tryout with San Jose to show that he was deserving of an NHL spot.

Winchester made an early impression on Sharks coaching and management, and eventually earned himself a one year deal worth $725,000. That's a cheap price to pay for a player who gives you grit, strength and a smidge of scoring pop. He did score 10 goals last year. Problem is, you're also getting a player who was -18 last year and who had one of the worst CORSI numbers on his team (4th worst).

Moral of the story was that Winchester was brought in to trot out against teams who have a more physical focus. He'll fight for you, he'll level a big hit, and he'll fill in on the lower lines if he has to. Against more skilled teams, look for Jamie McGinn to get a look. 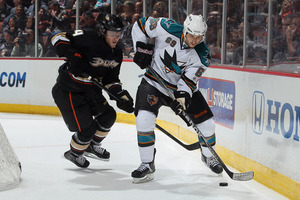 One of the most cliched and over used phrases around is "he came out of nowhere." Still, both GM Doug Wilson and coach Todd McLellan have used the phrase to describe the arrival of Andrew Desjardins. Instead of thinking of these two men as lazy with their verbiage, we'll assume he literally did "come out of nowhere". Maybe Worcester Sharks PR man Eric Lindquist was microwaving a chimichanga two years ago, when the device suddenly exploded, creating Desjardins from spare energy. Crazy development path.

Over the last two years, he has made a bit of a name for himself as the main piece of Worcester's "Crazed Rats" line. The line, which consisted of Desjardins, Dan DaSilva and John McCarthy, wrecked their way through the AHL regular season and playoffs two seasons ago. The line was noted for their grit and penchant for scoring timely goals.

While we don't expect a whole lot of goal scoring from Desjardins, that signature grit will have to carry over for him to be an effective NHL player. Effectively, he's replacing Scott Nichol, who was depended upon to provide energy on the fourth line and play a heavy load of shorthanded minutes.

We're all expecting that Desjardins will come into the role swimmingly, but there's a real sample size issue with him. Yes, he looked comfortable last year against Vancouver in three playoff games. Problem is, he's only played seventeen additional games in his career, and although he seemed capable of handling that load, the effects of an 82 game season on Desjardins are left to be seen.

Desjardins is a lock to see his penalty killing minutes jump from the minimal 0.26 / 60 to a figure well over 1.00 / 60. The Sharks early success may depend on how well he handles that jump. 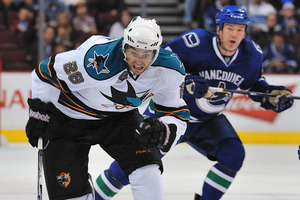 If the Michael Handzus signing was under the radar, then the Andrew Murray signing was a pin drop six solar systems away. Literally no one knew that he was signed until we tipped of David Pollak and he confirmed the news. (What, you thought we were going to let that die? Breaking news baby.)

Andrew Murray, (who at 6'2", 216 is large but won't be mistaken for Douglas Murray any time soon), has been injury plagued through most of his NHL career. He's played seasons of 39, 67, 46 and 29 NHL games over the last four seasons with Columbus, but showed flashes of being a skilled penalty killer in his limited time with the club.

He's going to be one of the Sharks four main penalty killers, and the speed that impressed coaches in camp will be an asset for the team. He's scored points, goals here and there, and should look for that to continue on a more offensively gifted roster.

If he stays healthy that is. 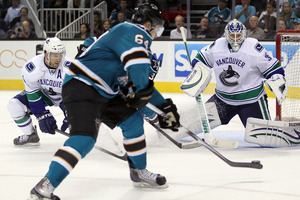 The best way to describe Jamie McGinn is that he's an enigma. In fact, he's a Jamie McGinma; a unique blend of potential that teases and "oh my good lord what is going on with this guy"-ness that baffles.

He's just 23, but even at that young age, Sharks fans have already come to think of McGinn as a disappointment. While he hasn't blown the doors off at the NHL level, it's easy to forget that he has been a very high scoring AHL player who was taken in the second round and still possesses a good deal of offensive potential. We've clammored for him to get the opportunity we think he deserves.

Still, McGinn only has has himself to blame at this point, he was basically handed a third line role and flat out lost that role to rookie Tommy Wingels. McGinn failed to impress coaches in camp and found himself out of a starting job, being bumped from the fourth line by Winchester.

While we want to see more from McGinn, we still cut him a little slack. He's been pigeon-holed into a role on the lower lines that doesn't really fit his skill set. In addition, it sure seems like he's Todd McLellan's new favorite player to plant in the dog house. With Setoguchi gone, McLellan had to find someone. For now, it looks like that someone is McGinn. It will be an uphill climb from here on out.

McGinn needs to go through waivers, and will likely not be sent to the AHL for fear of another team taking what could still be a very effective NHL player. Instead, McGinn will be used as a healthy scratch and a replacement when Winchester's fists aren't necessary. When he gets his shot, either through that scenario or injury to another forward, he's going to have to capitalize. He's quickly running out of chances and could become a trade candidate come mid-season.