With the 2011-2012 season set to begin on October 8th, Fear The Fin will be partying with Miss Cleo and previewing the Sharks roster in the weeks leading up to opening night. Today we continue with what is expected to be the Sharks first/second pairing: Brent Burns and Marc-Edouard Vlasic. 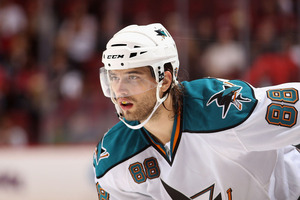 For three years Fear The Fin has beaten the drum on acquiring a legitimate top pairing defenseman that can play in all situations and help complement Dan Boyle. It has been the achilles heel of this team for so long now that expecting things to change in a positive way always felt like wishful thinking and a fascination with the unattainable. It felt like going to the horse races all hopped up on taffy and pop, putting your entire paycheck on Mane Event, and watching as Robin Hoove come out of nowhere in the final leg to get the win. Every. Single. Season.

Brent Burns has changed all that.

An excellent skater, Burns is a premier offensive defenseman in a League where these types of players are at a premium. He scored 17 goals last season for the Wild, tied for the team lead in power play goals with eight, posted 25:02 in ice time, and played a large amount shorthanded (2:42) as well as on the man advantage (3:04). He's a big minutes player who can begin to ease the workload off of Dan Boyle's shoulders, something that is a net positive for San Jose considering Boyle's minutes have begun to take a toll on his play during the last two seasons.

Where Burns will benefit the team the most is on the power play where his eight power play goals tied for the team lead last year in Minnesota. He has an excellent slap shot that he gets on net with frightening consistency (170 shots in 10-11) and will enter the year as arguably San Jose's most potent weapon from the point. He can move the puck up the ice well with a good first pass, has skating ability that is rivaled only by Dan Boyle, and is aggressive when pinching in the offensive zone.

Not all is rosy when it comes to Burns however. Although his offensive game is one that should cause a few circuit breakers to explode in HP Pavilion throughout the course of the year, Burns is a mixed bag defensively. He was a -15 in 2009-2010 and a -10 in 2010-2011, finishing second to last and last respectively amongst all Wild blueliners. Part of that can be attributed to his situational play-- he was second on the team in terms of quality of competition last year and had the fourth toughest zone starts (beginning 57.4% of his faceoffs in his own end)-- but part of that is also due to the risky game he is known to play.

With 80 giveaways last season (the nearest defenseman, Marek Zidlicky, had 33) as well as a propensity for taking penalties (1.1 per 60 minutes of ice time, which would have been the worst on San Jose this year), there should be some reasonable trepidation here when the puck is in San Jose's end. Which isn't to say that Burns is a liability on the ice-- after all, you don't lead your team in TOI if you are. However, it is fair to state that Burns will produce moments of frustration for his team when he encounters the inevitable poor decision in his own zone. The hope is that the steadiness and defensive responsibility of Vlasic will help guide Burns and the Sharks through these moments of darkness in a way only Pickles can.

The biggest question for Burns during the 11-12 season is twofold-- he's dealt with concussion issues in the past, so staying healthy is a big priority. The second is whether or not he can progress into a two-way defenseman that many expected him to be after a breakout season in 2007-2008. Playing alongside Vlasic and having a reduced role compared to the heavy lifting he had to do in Minnesota should help immensely in this area, and set up a situation where Burns is placed in the best environment for him to continue to grow. 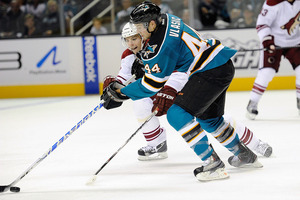 Perpetually underrated by national media and local fans alike, Vlasic's game isn't one that stands out in any monumental way. He's quiet in the corners, a non-factor offensively, and a mid-range skater who doesn't carry the puck out of his own zone extremely well. If you're looking for highlight hits and scorching shots from Vlasic it makes sense that he would fly under the radar-- there's nothing here that screams for attention, which in the case of Vlasic, is a superb quality to have in a quietly effective shutdown defenseman. Adept with the poke check, pushing puck carriers out of the middle of the ice, and breaking up odd-man rushes, Vlasic's game is one that is supremely effective if not entirely unnoticeable to the average Joe watching the game at home.

Consider this-- over the last three seasons in San Jose, Vlasic has finished in the top 3 for quality of competition with the Sharks, first in defensive zone starts, either third or fourth in relative CORSI, top 3 in GAON/60 of ice time (3rd, 1st, and 2nd respectively), and first in shorthanded ice time per game. Most importantly, he did this all at the ages of 21-23. At a position where defensive responsibility and a knack for minimizing mistakes in your own end usually doesn't fully develop until your mid to late 20's, the now 24 year old Vlasic is immensely ahead of the curve when it comes to both his contemporaries and historical comparables. It's hard to forget that he's played in 452 NHL regular and postseason games at this point in his career, but lo and behold, Vlasic has become a huge part of the Sharks blueline and one of the team's most important players heading into the 2011-2012 season.

We've been extolling the virtues of Vlasic for so long on this site that it's hard not to cover new ground when it comes to our analysis of him as a player. That being said, the biggest question for Vlasic this season won't be if he can continue to be a defensive force on the ice or mesh well with the offensively inclined Burns-- that much is essentially a given, especially when one considers how well Vlasic played with Rob Blake during their time together in San Jose. The biggest question is whether or not the physical element to his game that he began to use next season will continue to improve, and whether or not he can begin to chip in more offensively.

We don't expect to see many issues with Vlasic's game this season, but if he has room to improve, that is where he would like to take strides. For a man known as "Steady Eddie" to his teammates, a continuation of where Vlasic's game has been over the last two years is going to be an acceptable performance next season.