I've been tracking scoring chances for the Sharks all season long over at The Neutral and Jason has asked me to FanPost them on Fear the Fin as well, so here goes the first of at least 50 scoring chance recaps for the year hopefully to be accompanied by many more in the spring. For a review of what constitutes a scoring chance, please see my earlier post on the subject.

We'll start with the overall chances for each team, with the Sharks' numbers listed first in every column:

The Sharks finished slightly ahead in both even strength and overall chances although, as we'll see in the full chances summary coming up, two of their chances came after pulling Antti Niemi for the extra attacker at the end of the game. With both goaltenders in net, even strength chances were dead even 15-15 with the Ducks outchancing the Sharks overall 18-17.

Two of the Ducks' three goals came from outside the designated scoring chance area and as such were not recorded as chances. That doesn't always mean the goaltender had a rough night, but in this case I think it's safe to say the Luca Sbisa and Andrew Cogliano goals were ones Niemi wasn't particularly proud of allowing. Patrick Marleau had an impressive five scoring chances come off his stick, more than any player for either team. It's always interesting to note what segments of the game were particularly controlled chance-wise by a certain team. In a span of about three minutes in the second period tonight, the Ducks rattled off 5 consecutive chances - one-third of their even strength total for the night. Later in the middle frame, the Sharks had three chances in the span of three seconds courtesy an odd-man rush that produced a backhand shot by Ryane Clowe followed up with two rebound opportunities for Marleau.

The pretty colors aren't showing up for whatever reason but the first column for every game state is "chances for" while that player was on the ice while the second column represents "chances against." Any way you slice it, Joe Thornton had one of his worst efforts of the season tonight. In addition to his execrable giveaway that lead to the Ryan goal, Jumbo soundly lost the chance battle to a greater degree than any of his teammates. In Joe's defense, he did play reasonably tough minutes, spending nearly 10 of his 17 even strength minutes against Ryan Getzlaf and Corey Perry. In what was a high-event night for scoring chances in general, Marleau's totals in both the for and against columns are comically large as he was on the ice for 47% of the Sharks' even strength chances and 66.6% of the Ducks' chances at evens. 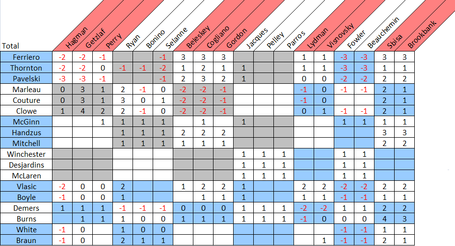 Click to embiggen. The chart (made possible by the great Derek Zona) is from the Sharks' perspective and shows how each San Jose player did with regards to scoring chance differential against each member of the Ducks. I grouped the Sharks and Ducks by line combinations and defense pairings at the start of the game, although those changed a bit for San Jose as McLellan swapped Jamie McGinn with Benn Ferriero a few shifts after the former scored a goal while Colin White's injury made it mix-and-match time on the blueline throughout the third period.

What really stands out to me is how well Marleau/Couture/Clowe fared in their (admittedly limited) time against the Getzlaf line. Even if we remove the 6v5 chance by Clowe for which Getzlaf and Perry were on the ice, no member of the Couture line lost the battle against Getzlaf's unit while Thornton and Pavelski were creamed. Which makes it somewhat confusing that Todd McLellan continued to match Thornton against Getzlaf into the third period, especially considering the Couture line was coming off a game in which they went to town on Anze Kopitar.