The overall chance numbers weren't looking pretty for the Sharks through two periods with the Canucks leading 13-7 after 40 minutes of hockey despite a tied score. San Jose took charge in the third, registering five consecutive scoring chances at one point to make the final totals a much more even affair.

The aforementioned stretch of five straight chances in the third period was emblematic of a dominant frame for the Sharks as they dictated the flow of the game during those twenty minutes after having mightily struggled to do so for much of the first two periods. Some of that was the result of power play opportunities but San Jose impressively held Vancouver to just one even-strength scoring chance in the third. However, the Sharks' inability to record even one scoring chance on either of the 4v3 PPs they had late in the final period of regulation and into overtime ended up costing them.

This is a very disappointing table from the Sharks' perspective. The only San Jose skaters to win the scoring chance battle were the fourth line and Marc-Edouard Vlasic. While there are certainly mitigating circumstances to take into account (Patrick Marleau, Logan Couture and Ryane Clowe spent the bulk of their shifts against the Sedin line), you just aren't going to win many games in the long run in which your players lose their matchups pretty much across the board. 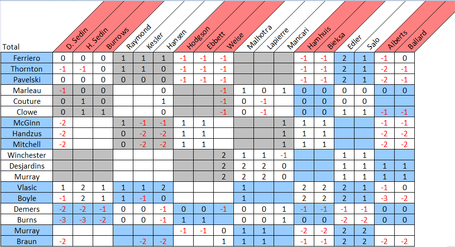 Click to enlarge. There was some talk on the broadcast tonight about Vlasic being the Sharks' MVP so far this season and his performance in this game should certainly add fuel to that fire. Vlasic spent 12 of his 21 minutes at even strength against the Sedin twins and won the scoring chance battle, in addition to staying on the positive side of the ledger against Ryan Kesler as well.

In my chance summary for the Ducks game, I talked about how Todd McLellan's usage of Joe Thornton against Ryan Getzlaf was somewhat ill-advised given how well Marleau, Couture and Clowe had been performing against opposing top units. McLellan went back to those three for the bulk of the Sedin twins' shifts tonight and while the results weren't as jaw-dropping as their domination of Anze Kopitar last Friday, they got the job done as Couture and Clowe both won their matchup against the Sedins while Marleau only finished minus-one.