Sharks Gameday: What a 9-1-1 run gets you in the Western Conference this season

Share All sharing options for: Sharks Gameday: What a 9-1-1 run gets you in the Western Conference this season 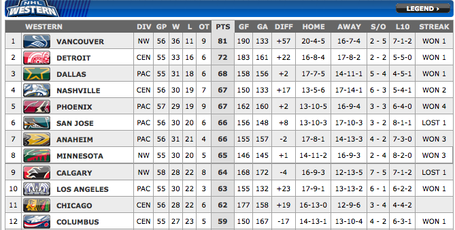 Oshiya are employees of the Japanese subway system. During rush hour in some of Japan's most populous cities, the subways are filled to the brim with individuals attempting to commute to work-- the capacity of these trains sometimes reaches double the amount allotted. The Oshiya help commuters get onto the train by pushing them into the car, resulting in the hilarious situation you see here:

Their role of the oshiya is similar to the loser point for an overtime/shootout loss in the NHL. It lumps teams together, promotes parity, and makes that space tighter than you'd ever imagined. Little known fact: Gary Bettman actually learned the technique of the oshiya in the early seventies, when he was studying abroad in Japan and needed some supplementary income to pay for textbooks (citation needed).

So what does a 9-1-1 run get you in the Western Conference this season? A situation where your playoff season essentially starts in mid-February*.

*Especially when you're 9-7-1 in your last seventeen.