Share All sharing options for: How much of an advantage is home-ice advantage in the first round?

As of today the Sharks are in fifth place with 60 points, a stone's throw away from the fourth seed (NSH, 61) and a loose pebble away from tumbling to 11th (CGY, 58). It's very likely the final playoff picture in the Western Conference doesn't get decided until the last week of the season-- there's so many teams still involved that even San Jose's current 6-0-1 run hasn't gotten them as much breathing room as it would have in year's past.

On paper, San Jose should make the playoffs. I believe they will. Where they end up is another matter, a question that comes along with a multitude of variables-- injuries, goaltending, trade acquisitions (both from opponents and the Sharks themselves) are all factors that haven't been accounted for yet, and will have both large and small effects on San Jose's final placement.

If the Sharks finish 5th or lower this season, it will be the first time since 2007 that they would not have had home-ice advantage in the first round. Many have pondered whether or not that would be a good thing for the Sharks-- perhaps a season filled with adversity (self-inflicted, I should stress) allows them come together as a team in some sadistic bonding ritual that is only achievable through shared grief and sorrow. An emo concert for professional hockey players sort of thing. Or maybe an opposing team overlooks San Jose because of their seeding, lulled to sleep by their mercurial play during the course of the year. Like walking into your parent's bedroom when they think you're out with your friends for the night, that lack of preparation stuns the opposing team into a spiral from which they cannot recover.

It's not something I buy into-- for the most part, an 82 game NHL season has a way of separating the good teams from the bad, and barring a severe case of injuries, the better teams are located in the upper half of the register while the worse teams are located in the lower half. It makes sense that you would want to play a lower seed in the first round. It makes your trek through the playoffs easier. Potentially facing Vancouver and Detroit in the first two rounds is an infinitely harder task than going up against Phoenix and Minnesota.

Which isn't to say upsets can't or won't happen. One only has to look at the 2006 Oilers, or the 2000 Sharks, or the 2010 Canadiens to see that lower seeded teams can stage some huge upsets and send tremors through the hockey world. But as we'll see today, home ice advantage does in fact exist in the playoffs, effecting winning %'s from seeds one through eight.

The most convenient statistic people usually point to when trying to assess home-ice advantage is the percentage of times the higher seed wins their series. It's a good place to start, but leaves a little to be desired-- the reason being, of course, is that just looking at series wins doesn't tell you how those two teams played at home throughout the course of the series. What we're looking at today is home winning percentage from both the high and low seed in a series.

All of the data throughout the course of the last ten first rounds (2000 through 2010) is outlined below. In an attempt to give you as much as possible to chew on, I've broken up the tables into four separate parts. The first table contains all of the Eastern Conference statistics by seeding, the second has all of the Western Conference statistics by seeding, and the third has a summary of the entire NHL.

I feel as if the summary has the most important things, and will be of primary focus. The first two tables are basically a data dump, but one I wanted to provide for those who wished to see it.

Feel free to poke around to your heart's content, but the brunt of my analysis today will be on the Western Conference and the NHL. And make sure to keep in mind that this is solely a look at the first round-- I plan to expand this table into the final three rounds later on in the year, but felt that consolidating the information into the first round would give us the best picture of how home-ice advantage, or the lack thereof, could effect the Sharks this season. 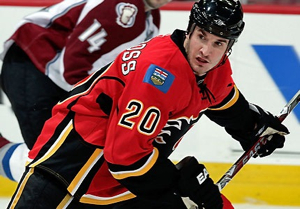 The only anomaly over the last ten years is the 3-6 matchup in the West and the 1-8 matchup in the East, where both teams have played better on the road than at home for whatever reason. Matched against the data from the rest of the League however, I wouldn't say that this is a product of those seeds being better matched for the rigors of the road-- rather, it seems as if this is just a case of random variance.

Since it's clear that home-ice is an advantage that is present in postseason hockey, the question becomes how much of a factor it actually is. After all, a lower seeded team could win every home game (3,4,6), lose their first three away games (1,2,5), and steal game seven on the road to win a series. That fits in with the percentages we are observing here to a certain degree-- a good home record (100%) and lousy road record (25%), but a series win nonetheless. As the first two charts show, higher seeded teams (i.e. teams with home-advantage) win more series (65% of them in both Conferences), but things get tighter as we work our way to the middle of the pack. Furthermore, the higher seeded team only has one more potential game at home than the lower seed-- despite the clear advantage the home team has over the road team, both clubs get their fair share shot at stealing a game or two on the road before that "advantage" is truly realized.

There is a lot of parity in the NHL today, something that is on full display in the Western Conference this season. Teams are neck and neck all the way through the 4 and 11 seeds, meaning there's a razor thin difference between making and missing the postseason. Any matchup in the first round will likely be a battle for any team, and the opportunity for upsets might be greater than they have been since 2006 when every lower seeded team in the West won their series.

However, there is no doubt that obtaining the highest seed possible in the playoffs makes your job somewhat easier in that respect-- as we mentioned before, avoiding Detroit and Vancouver for as long as possible is in San Jose's best interest when you compare those matchups to ones against teams like Phoenix and Minnesota. Furthermore, playing at home has historically produced dividends for teams, as the winning percentages of home versus road games will tell you.

But if the winning percentages tell us anything, it is that home-ice advantage is a real asset for a team. And it is in the Sharks best interest to obtain that advantage, psychological musings of the benefits of a lower seed be damned.