Contenders and Pretenders: Victory comes with a price

Share All sharing options for: Contenders and Pretenders: Victory comes with a price

The Sharks waltzed to a convincing 5-3 win last night over the St. Louis Blues, but they lost their second leading goal scorer Logan Couture in the process. Less than eight minutes into the game the Sharks were ahead against the visiting Blues 3-0. It wasn’t until the third period and a four goal lead that they took their foot off the pedal and squandered a pair of goals to make things look closer than they were.

San Jose set the tone early at the Tank tonight, and even with the Blues’ tough guys trying to mix things up, they were never in this game. 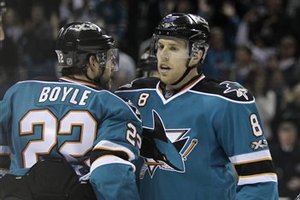 Joe Pavelski-- The game’s first contender whether he gets credit for the hat-trick or not. He has upped his level play lately and has brought his line mates along for the ride. Joe appears to be returning to the form that changed him from "Little Joe" to "The Big Pavelski." Last year in the playoffs Pavelski carried his team through the first round a half with timely scoring. He was the go to guy until the rest his mates found their groove half way through the Detroit series.

Well it’s that time of year again, and after a fairly quiet regular season, Pavs is just now starting to really make some noise. The chemistry that he shares with Torrey Mitchell has grown in the last few weeks, and along with newcomer Kyle Wellwood, they have transformed into a formidable line. This line has shown Sharks fans a lot heart recently with clutch scoring, and as a result, that kind of production from the third line has (and will) continue to take pressure off the top two lines. Mitchell and Pavs have scored nine goals and twelve assists between them in the last four games.

The Big Pavelski’s timing may turn out to be critical with the injury to Logan Couture depending on how long he is out. Couture left the game early in the second period after slamming hard into the boards behind the Blues net and needed help off the ice. It was twittered that he went for X-rays, but for now the official word is lower body injury.

Sharks special teams-- The special teams operated at 100 percent efficiency on both the power play and the penalty kill. The defense were very successful at getting pucks through to the net tonight which resulted in two goals on two power play attempts. The best penalty killer tonight was Niemi, but the Sharks showed great discipline by giving up only two short handed situations. 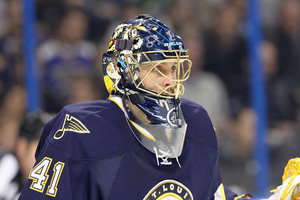 Jaraslav Halak-- Halak is the obvious choice for the night’s first pretender because he was yanked after three goals on ten shots at 7:41 of the first period. The Blues were behind the eight ball early and never fully recovered. They played like a team that isn’t going to the post season until the third period when the Shark’s intensity dropped with a four goal lead.

Cam Gore-- the author of this article is the other pretender on the night for predicting before the game that Antero Niittymaki would get the start in goal for San Jose. If you dish it, out you have to be able to take it.

Tonight was Antti Niemi’s 28th consecutive start for team teal and he looked solid all night long, unlike his previous games where his level of play dropped. Specifically, his level of play dropped from the high he was on during the Sharks seven game road trip where he recorded back to back shutouts. However, Niemi is still playing better than he was at the start of the season. He is the go-to-guy for the Sharks moving forward, but after seeing the likes of Roberto Luongo and Ryan Miller fatigue in the playoffs the last couple of years, a game or two of rest would bode well for San Jose’s playoff success.

Antero Niittymaki has held his own for the most part this season, and if he is called upon this spring, playing in an important game or two down the stretch will help prepare him for the pressure that comes with playing in big games that time of year.

Keep your stick on the ice,