Perhaps no hockey topic is discussed more than special teams.

Whether it's the power play or the penalty kill, it's almost a guarantee that a coach is going to mention something about his team's ability to capitalize on their opportunities or prevent mistakes at these crucial times in any conversation, interview, or locker room speech. That speaks to the importance of each unit, and why the groups of players who earn the responsibility of playing during these two minute spans are watched under a microscope.

Because it's talked about so much in general, special teams percentages are thrown around almost constantly. In terms of measuring a team's success, this is a tried and true method of shedding light on a season. If both percentages are strong, your team is usually in the thick of the playoff hunt. If weak, then you're likely on the outside looking in. (With the exception of the Phoenix Coyotes, who are pretty poor in both respects and are chasing the Sharks for the Pacific Division lead)

As my cohort Jason Plank pointed out yesterday, it's a common misnomer that the Stanley Cup Playoffs are officiated more loosely than the regular season. In fact, the frequency of penalties called in the postseason stays relatively the same. Because of this, a discussion of the special teams unit is just as apt heading into the playoffs as it was in the preseason. Yes, the majority of the game is played at even strength. Still, special teams success can either give a team new life or leave them dead in the water.

The Sharks'power play success rate stands at an extremely healthy 23.3%, good for third in a league dripping with offensive talent. Usually, this is used as a metric to show how much San Jose has dominated in man advantage situations this year, a true statement. They have the players, they have the skill, and they undeniably have had the results. My question, however, is this: In the grand scheme of things, is this stellar power play enough to win a team the important special teams battle?

That's when the penalty kill comes into effect. At 79.8%, the Sharks are near last in the NHL. For a team which has excelled in this aspect since the lockout, that's a very troubling fact. Earlier in the month, I wrote that the injuries to Dan Boyle and Scott Nichol were big factors in the rapidly deteriorating penalty kill success rate. While those factors can't be ingnored, the fact remains that the kill has been mediocre even when those players are in the lineup.

This leaves us with an elite power play and a struggling penalty kill. In terms of the team's overall success, the problem there is bigger than you may think. 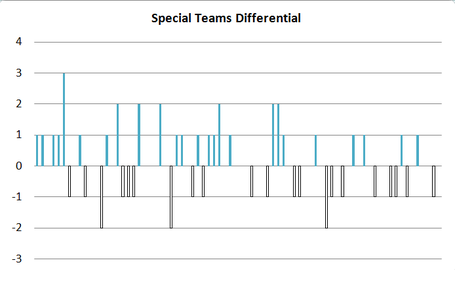 The graph above shows "Special Teams Differential" on a game by game basis. A positive number would indicate that a team scored more power play goals than it allowed in any given match, while a negative would indicate that the team gave up more powerplay goals than it scored. It's not a pretty picture for San Jose, who has, since the midway point of the season (game 43), posted an 8-11-15 (won, loss, tie) record in the special team's battle.

The beginning of the year saw San Jose fare much better (17-10-15), but that time is long gone. Since game 60, the Sharks have won the special teams battle just three times. Advantage, especially when talking about the power play, begins to feel like a hollow term.

In total, the Sharks have scored just nine more power play goals than they have allowed this year. When you divide that by the number of games played, that leaves you with .118. As in, the Sharks power play contributes .118 goals extra per game than the kill allows. I think you would be hard pressed to find someone who thought that number would be so low. (I haven't even mentioned the shorthanded goals the Sharks have given up. It's seven, and they've scored only four.)

More bad news? The Sharks are one of the least penalized teams in the league, meaning that simply tightening up their game won't help much. Just 270 minor penalties have been called against the Sharks this year, or 3.55 per game. In addition, the Sharks have touted their increased physical play as a point of strength this year, going so far as to add players like Ben Eager and Jamal Mayers to help make San Jose a tougher team to face.

Conversely, San Jose is in the middle of the pack when it comes to drawing penalties, and likely won't see that number jump once the playoffs start. The Sharks can't expect to be given more opportunities to roll their big guns out there with a man advantage come playoff time, and their current conversion rate of 23.3% is so high that simply getting better in that regard isn't a real option either. Clicking at a one-for-four rate is not only unlikely, but also unsustainable.

These numbers all display a frightening truth when it comes to the Sharks chances going forward; No matter how powerful they are with the man advantage, it means little if they can't tighten up on the other side of the coin. Any improvement in the Special Teams Differential will have to come in the form of an improved penalty killing unit.

With four non-game days separating the game in Phoenix from Thursday's tilt at home against Dallas, you can guess that the coaching staff is going to dwell on the penalty kill in practice. It's a warranted concern, given that opponents are converting against the Sharks at a rate of 20.2%, which would represent the 7th best unit in the NHL.

The Sharks power play will help them come playoff time. However, if the penalty kill doesn't improve, that previously percieved benefit will prove marginal at best, as it has proved to be all season.