Do power plays decrease in frequency during the postseason?*

Share All sharing options for: Do power plays decrease in frequency during the postseason?*

*Or, "Are rhetorical questions like totally the in-thing for headlines right now?"

[Ed. Note]: This is the first in a two part series concerning the importance of special teams in the postseason. Matthew underscore Taylor will be by tomorrow morning to finish the series. As an aside, TCY is no longer with us. I cannot underscore this enough.

Common thinking amongst the hockey fan goes as such-- the postseason will bring two things, the first being an unquenchable thirst for the blood of opposing teams, and the second being a tendency for officials to put away their whistles and "let the boys play." While the first may be true (sleep schedules during the postseason are all kinds of manic if they exist at all, and it's hard to say bloodlust isn't a healthy activity for members of society who by all accounts have begun to resemble vampires), the second is something that is up for debate.

Calling less penalties makes sense on some level of course-- since the games are so tightly contested, and each play magnified tenfold, the officiating crew is wary of making any sort of discernible impact on the game by calling a "well he sort of hooked him and impeded his progress through the neutral zone" penalty on a team. Especially if that call would give a team an opportunity to score the game winning goal. Especially if that call could change a series.

And in the postseason, every goal could conceivably change a series.

As it turns out however, the notion that officials tighten up their frequency when blowing the whistle is simply not true. 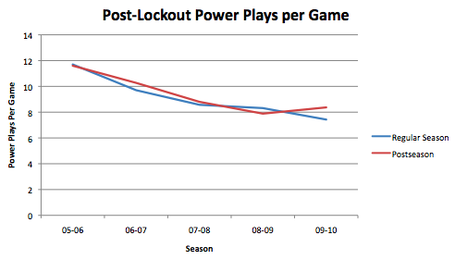 A few notes-- as we can see from the data, the further you get away from the 2005-2006 season the less penalties are being called on a per game basis. Following the lockout during 2005 the NHL brought in a slew of new rules that changed the game immensely and made it a faster and more polished product. Players were obviously getting used to these new standards and struggled with them at first, causing natural selection to take place in an expedited time frame. The slow and meek were weeded out in favor of the young and robust. The game changed.

During that same period, officials, who were hit with new criteria that inevitably changed their outlook on how to police the game, strictly enforced those rules. And with the hook and grabbing players still in the League, those dinosaurs of yore were open season for officials to penalize.

However, I think that might only tell half the story. As the game has progressed, and those players have been weeded out, the power plays per game would likely decrease. But considering each year has seen a drop in penalties at a pretty consistent rate, other variables may be in play here. A drop in power plays from 11.60 per game in 05-06 to 7.42 in 09-10 is drastic and cannot be solely chalked up to natural selection. A situation where players have begun to figure out what they can get away with, officials getting comfortable with the rules and letting fringe penalties slide, and picking up habits ingrained in hockey culture are all likely reasons why we've seen less penalties being called as the years have gone by.

Furthermore, I think it's extremely compelling that the amount of power plays given to teams in the postseason mirrors that which are given during the regular season. For each year that regular season power plays decreased, postseason power plays decreased as well. The playoffs always bring talk of the immense pressure being placed on the players, but it should be noted that officials likely feel the same pressure as well, if not more.

In a day and age where the difference between a game seven win or a game seven loss means more to an organization than just the chance to advance a round (in other words, ticket revenues, concessions revenues, merchandise and memorabilia are all immense factors here) the fact that officials have been fairly consistent in this regard is a testament to their craft.

I'm not an official apologist by any means, and you don't have to look very far to see an article penned by a prominent blog or website that proclaims the vast ineptness of these individuals. However, the fact that they've been consistent in the number of penalties being called within the context of an entire season (including the playoffs) shows that there is a method behind what is usually seen as utter madness. Officials deserve some praise, however abrupt and half-assed it may end up being.

In summary, the notion that the postseason brings loosely officiated games is, in fact, a myth. In fact, the majority of postseasons since the lockout, three out of five to be specific, have seen more power plays handed out on a per game basis than the corresponding regular season. The difference is usually negligible in these situations-- I'm not arguing that officials tend to call a tighter game in the postseason, but rather that they generally carry the standards of the regular season with them into the playoffs-- which has a lot of implications for an organization's special teams capabilities, implications that could determine their playoff success.

I'm not one to knock even strength situations. After all, the majority of the game is played at evens, and a team who can dominate in this realm will generally draw more penalties as a result. And I'm certainly not saying they aren't important-- I think even strength play is probably the best gauge of a team's long-term success due to the above factors.

What is clear however, is that power plays and penalty kills continue to be just as big of a factor in the postseason as they are in the regular season, and likely more so considering the rarity of them. With the Western Conference so tight this year, and goals certain to be at a premium throughout the entire playoffs, having an excellent power play to penalty kill ratio is of utmost importance for success.

Success that could mean golfing in late April.

Or planning a parade in mid-June.