Share All sharing options for: 2011 NHL Playoffs: A look at the Los Angeles Kings defensive unit

The overarching theme to the Sharks-Kings first round matchup will inevitably be patience.

For the Sharks that means avoiding the frustrations a good defensive team will cause during a series, especially in a matchup where both teams know each other inside and out. Although San Jose and Los Angeles have never met during the postseason they do meet six times during the regular season. Which means Terry Murray and the Kings probably know better than anyone how to stifle the Sharks offense-- whether or not they can execute that gameplan is an entirely different matter of course, but the mere fact that the knowledge is present means that the inevitable frustration over a goalless period is bound to eventually emerge.

For the Kings that means avoiding the frustrations an injured star forward will cause during a series, especially in a matchup where they would be the weaker offensive team on paper by default anyways. Without Anze Kopitar and Justin Williams (who is unlikely for game one), an already struggling offense will find the goals even harder to come by, something that can cause a few grey hairs during the postseason when goals are dryer than your mouth after a spoonful of cinnamon.

If familiarity breeds contempt (and it does), then there's no doubt this one should have some bad blood involved.

What Los Angeles lacks in offensive firepower they make up for in defensive ability. The Kings finished this season 3rd in shots against per game (27.9) and 6th in goals against per game (2.39), a testament to the discipline Head Coach Terry Murray stresses when it comes to his defensive gameplan. Murray fits the Dean Lombardi management philosophy perfectly in that sense-- develop a hard working, defensively oriented team that stresses responsibility in their own end, pressures the puck at every opportunity, and makes opposing teams pay for getting too cute in their passing game.

Murray has the tools on the backend to do just that. Los Angeles' top four is as good as any in the NHL, with an excellent group of players who complement each other well and bring various skill sets to the table.

Drew Doughty is the Kings most important defenseman, seeing the most TOI and playing in all situations-- from even strength to the penalty kill to the power play, Doughty is a special player who has all the tools and will make a tremendous impact on this series. His first postseason experience against the Canucks last season, a Norris Trophy finalist, and a Gold medal last year as a member of the Canadian Olympic team have given him some nice seasoning-- the kid may be 21 years old but he's as good a defenseman as they come. Doughty has had a mercurial season to date, and really struggled down the stretch (since March 15th he posted 0 G 3 A and a -2), but there's no doubt he'll be the Kings most important defenseman during this series.

Willie Mitchell is the Kings second most important blueliner. Many here will remember the craze surrounding him during the offseason, and that craze has turned out to be justified-- Mitchell has had an excellent year for Los Angeles. He's a stereotypical shutdown defenseman, and an excellent one at that. Big and positionally sound, Mitchell sees the toughest competition on the team and gets a ton of defensive zone draws. He was a huge part of the Kings fourth-ranked penalty kill (3:24 per game), and I'm guessing he'll be matched up against Thornton for the duration of the series. 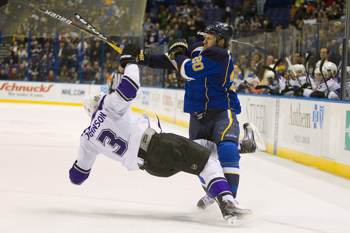 Jack Johnson has marginally improved his defensive game this year, but still has the tendency to get a little too aggressive when pinching and carrying the puck. With the Kings pressing for goals due to the loss of Kopitar, taking advantage of Johnson's run and gun tendencies is going to be paramount for San Jose. Amongst the Kings top four Johnson is the weak link defensively. Since he's paired with either Scuderi or Mitchell on most nights, I wouldn't be surprised for the Sharks to put the puck into the zone on Johnson's side more often than not. The key here of course is to generate as much speed through the neutral zone as possible so they're on him as soon as he retrieves the puck-- Johnson is a good puck mover, and if he has the time and space to make plays, he can get the Kings transition game moving. If the Sharks can use their big forwards to control him below the faceoff dots however, this is a matchup that is appealing for San Jose and can result in some extended zone time.

Rob Scuderi rounds out the Kings top four and is another shutdown defenseman who has postseason experience-- he won the Stanley Cup with the Penguins in 2009, and made a Finals appearance the year before as well. Think of Scuderi as a quicker but less physical Douglas Murray-- he'll block shots and eat up minutes on both the penalty kill and at even strength.

Alec Martinez and Matt Greene will be the Kings bottom pairing, with Martinez providing the offensive spark and Greene playing the role of defensive stopper. It's not a dynamic duo by any stretch of the imagination, but considering they're the bottom pairing, it's a strong group of guys to have in the 5 and 6 hole. Matt Greene is underrated in that regard-- he's a better defensive defenseman than he gets credit for, providing the Kings with some solid play in limited minutes.

As we mentioned before, expect Thornton to see a heavy dose of Willie Mitchell this series, especially on the road when the Kings have the last change. Mitchell usually gets paired with Doughty at even strength which gives the Kings a pairing they can roll out consistently. The Sharks top line of Marleau-Thornton-Setoguchi should see them consistently, with Johnson-Scuderi getting the go against Couture. That leaves Pavelski and the Hellacopter Line* to go up against Greene-Martinez.

*Getting all sorts of Norcal with it.

We'll mention this a lot during the series, but perhaps San Jose's biggest advantage comes along with that third line. Joe Pavelski is going to be getting much softer shifts than he is used to during the postseason, which is a benefit that not many Western Conference playoff teams have. Look for him to be a difference maker-- it is April after all.

The most important aspect of beating the Kings stellar defense will be zone entries. Attack Johnson's side when he's on the ice with high dump ins that allow the Sharks forwards to close the gaps and put a body on him as soon as he retrieves the puck. The Kings forwards are aggressive in attacking the puck and support their defenseman well, meaning that it's likely we'll see a lot of board play throughout the course of the series. San Jose's big forwards are no stranger to this type of play (it was the decisive factor against Detroit during 2010), but a slower and more methodical pace fits both teams gameplan fairly well.

The Kings blueline is their greatest strength and will provide the Sharks with some trouble throughout the next four to seven games. It wouldn't be surprising to see Murray implement a neutral zone trap and attempt to strangle a Sharks offense loaded with weapons, something that has the potential to frustrate a team who has made a habit of lighting the lamp with regularity down the stretch.

If the Sharks stay patient in the face of what is likely to be a slug-em-out physical series filled with low scoring games, there's little doubt that they have all the tools on paper to make this series shorter than many in Los Angeles would like to see.